It’s the spring and bass all over the country are attempting to move up into the shallows and spawn.  As much as they desire to procreate; they are often forced to deal with sudden weather changes in the earth’s transition from winter to spring.

While January and February’s snow flurries and freezing rain have turned to April Showers, the water temperatures rise and fall with runoff, snow melt and new storms.  The result of the environmental wackiness is a population of bass in flux.
Should they move up, should they hold on transition areas and wait for more stable conditions?  Only biological factors inside the genes of the bass know for sure what they should be doing at that exact moment.  The one thing we know for sure is that they need to be in the shallows, they want to be in the shallows; and that we, as bass anglers, want to catch them. 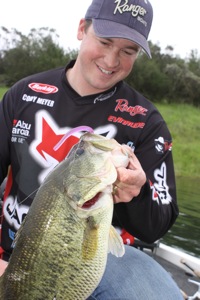 At lakes across the country, anglers churn the surface of the water into a froth with crankbaits, spinnerbaits, jerkbaits, swimbaits, lipless crankbaits and Chatterbaits in search of bass.  One can only imagine that after a weekend of aggressive springtime anglers that the bass must feel like Londoners during the Nazi Blitzkrieg in World War II.  When this occurs, bass’ moods often become negative and they become spooky and very difficult to catch.

While many anglers see this as a frustrating time; FLW Tour Pro Cody Meyer sees it as an opportunity.  Being a native of California, Meyer is equally adept at throwing big baits as he is using light line tactics.  It is one of those tactics that he uses as a fallback when high pressure situations dictate.

Meyer turns to a dropshot rig.

Why Dropshot?
When Meyer begins seeing big females cruising on transition zones and secondary points, he knows the spawn is on the way.  But, by the time he begins to see them, he realizes that other anglers are as well.  “This is the time that most anglers reach for swimbaits, crankbaits or other known springtime producers,” said Meyer.  “I usually start with those too, but when bass become spooky; it’s time to think small.”

He chooses to have a finesse rig tied up; even though it may not necessarily be the most efficient plan for convincing big bass into striking; or landing them for that matter.   His thought is that he is willing to trade the “big bait, big bite” mentality for something that may entice a strike when nothing else will.

What You’ll See
When water temperatures breach the mid 50’s and bass first move into the shallows, they will often suspend around pole timber, docks or large boulders sunning themselves.  The theory is that the sun helps develop eggs and make the big females more comfortable for the spawn. 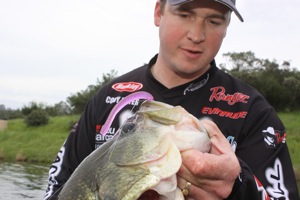 The reality is that they become more vulnerable to a skilled approach, but they also become more wary of outside influence.  “When I see bass in the shallows that are quick to dive when I get near, I know they are spooky,” Meyer said.  “That is when I start to reach for a dropshot rig on light line.”

Instead of wailing away with heavy line and big baits, Meyer tries to approach with stealth, and present the diminutive lures to avoid spooking them.  When those bass are near standing timber, docks or a point that features a rock to gravel transition, he knows how to catch them. 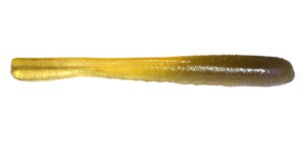 Equipment
Meyer chooses a Powell Endurance 712ML which he pairs with an Abu Garcia Revo Premier spinning reel, six-pound-test Berkley 100% Fluorocarbon line and a Jackall Lures Cross Tail Shad or Flickshake worm.  If the cover is sparse, Meyer will choose the Crosstail Shad first with a size 4 or 2 Owner Mosquito hook.  But, if there is a little more cover, he opts for the longer Flickshake worm Texas rigged on a 1/0 Roboworm Rebarb hook. 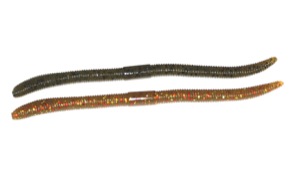 He prefers to use tungsten dropshot weights, an typically uses 1/8 to 1/4-ounce sizes; usually choosing to throw 3/16 as his main size.

How to Fish the Rig
Most of the time, a dropshot rig is meant to be fished vertically for bass that are suspended in the water column.  However, Meyer said that it is important to avoid spooking these wary prespawn females with his Ranger Boat.  “Most of the time I will use my Lowrance HDS units and get on top of the bass while letting the dropshot rig fall to them,” Meyer said.  “Not during this time of the year; I cast the rig and work it back to the boat.”

Meyer said that he tends to slowly drag and subtly shake the rig between pulls to entice a strike.  He said that keeping the sinker in contact with the lakebed is critical, so moving slowly is the key.  “I try to remember that I’m fishing for pressured bass,” he said.  “If I get in a hurry, I’m not giving myself a chance to capitalize.”

Hookset and the Fight
Bass will often swim down from the surface as the angler approaches, and gently mouth the little worm as it rest on the bottom.  The bite will usually feel like mushy pressure and an angler who takes this moment to rip a giant hookset will end up losing more fish than he catches. 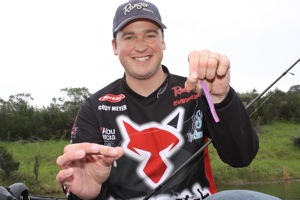 Meyer suggests that anglers merely lift up sharply and begin reeling faster in an effort to take any stretch out of the line to pull the hook into the fish’s skin.  He said it is important at that point to take your time and allow your reel’s drag and soft rod tip to absorb runs.

My 712ML has a light tip and the drag on my Revo Premier is really smooth, so I don’t have to worry about pulling the hooks out,” he said.  “If I take my time and allow them to run around a little bit in open water; I can land just about anything.”

The Results
Meyer and his team partner J.R. Wright, an FLW Tour Co-Angler who recently won the Co-Angler side of the FLW Tour stop at Lake Hartwell, were fishing a team tournament on their home waters; Lake Oroville, when the approach paid big dividends.

“We caught 26.25 pounds on a lake where 15 pounds is excellent,” he said.  “Everyone assumed we were throwing swimbaits, but we were dropshotting points outside of spawning areas.”  He also said he has used the approach on some of the south’s stained water reservoirs.  “I even used it at Lake Hartwell at our last stop; it can be really good when bass get finicky leading into the spawn.”

Wrapping it Up
So, don’t just assume that catching cruising bass in the springtime is impossible because they won’t eat that swimbait you keep chucking at them.  Do what Cody Meyer does and you may find a love for finessing big bass into striking.