Look at your tournament schedule.  Do you see a body of water on there that you’ve never been to before, or at the very least, have only been to a couple of times?  Are you stepping up from a local circuit to a regional one, or going to a regional championship at a new lake? 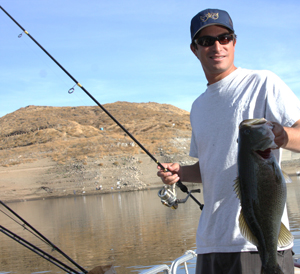 Kind of intimidating isn’t it.  Throw in the fact that it is the time of year that fish want to spawn, and you have even more parameters to consider.

For the average angler to begin planning for fishing a tournament on a new lake requires hours of research, exhaustive amounts of phone calls to people in the area; hopefully to those you trust.  While the pros do a lot of research, they also rely on their instincts to help them find their way.

One of those anglers; Justin Kerr, a second year FLW Tour pro from Lake Havasu, Ariz. relies on some up front work with technology, but only to find a starting point.  His approach has produced for him, with the 2010 FLW Tour Rookie of the Year title.

He spent his whole first season on tour fishing lakes that he had never spent any time on, so he had to figure out something that worked for him.  With limited resources outside of his home region, he has learned to do a little research, and to trust his fishing acumen.

How to Begin Off the Water
Kerr starts with a limited amount of information that he can get from friends, as well as a little Internet research; before the off limits cutoff period, to find an area of the lake he needs to focus on.  “I’m really only looking for the areas of the lake that have been productive,” he said.  “I want to narrow down the area of the lake I’m going to start in to keep myself from running back and forth.” 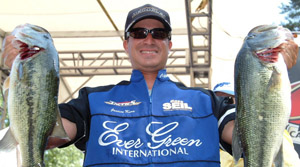 Once he knows the area he wants to begin searching, he will turn to Google Earth and topographical maps of the lake to find more specific locations.  “Google Earth gives me a basic understanding of the size of the lake,” he said.  “Some of the lakes out here are enormous, and it helps to have an idea in my head when I hit the water.”

Once he has a grasp on the size of the lake, he turns to topographical maps for study off the water.  Here he is looking for lake features that he can sample.  “I’m looking for creeks that are obvious spawning areas of the section f the lake that I’ve chosen to start in,” he said.  “I’m also looking for subtle pockets that have creek channels in them, because those are other areas fish will spawn in, but might get overlooked by other anglers.”

He notes those locations on his map, and prepares himself for the practice day.

Common Threads
One thing he does to try and save himself time is to bear in mind common generalities with bodies of water.  He has found that some past experiences with specific bodies of water have helped him in his search on a new lake.  “A lot of the lakes around the country fish similarly; especially in specific areas,” he said.  “What worked for me on Table Rock will help me on another Ozark Mountain Lake, and what was effective for me on Lake Lanier will help me on other lake with blue back herring as the primary forage base.  Trying to keep those past experiences in mind has helped me find what I need quicker.”

How he Practices
Once he slides his Ranger in the water, he then turns to his Humminbird 1198 with Navionics mapping to fine tune his areas.  The one thing he says he is careful not to do is get in a hurry.  “Because I’m not familiar with the lake, I don’t run around at full speed,” he said.  “I try to run my boat at a speed that gets me where I’m going, but allows me to look around for things I may not have spotted on the map.” 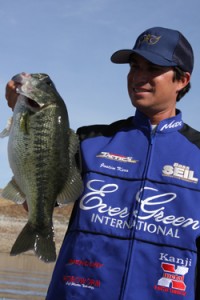 His approach is to stick to one of three options when he begins his practice.  They are three techniques he has confidence in, and doesn’t have to think about what the lure is doing, which gives him time to concentrate on the fish.  “I always have a two or three crankbaits, a jig and some sort of soft plastic rig tied up,” he said.  “I know that I can get bites on one of those three things most of the time, so that is what I throw.”

His first choice of crankbaits is an Evergreen Modo Wild Hunch crankbait designed by Elite Series pro Morizo Shimizu.  He throws it on 14-pound-test Evergreen Bass Seil Fluorocarbon line and a 6.2:1 reel on an Evergreen Kaliedo Husky Winder glass cranking rod.  He said he has other crankbaits at the ready, but that is his primary one.

Along with the crankbait, he uses a pair of jigs, an Evergreen Casting Jig, and one that he ties himself.  “I use the jig to pitch to shallow, visible cover like stumps and laydowns,” he said.  “I also have the casting jig ready for skipping and casting around docks; which can hold a lot of bass in tight groups.”

The other setup is some sort of a soft plastic rig; whichever he feels is appropriate for the conditions.  He’ll use a Carolina or a Texas rigged Roboworm in the same areas if he feels that the bass need a more stealthy approach.

“I’m a very visual angler so I tend to fish the bank mostly,” he said.  “Fishing visual targets is the fastest way to get some response to allow me to figure out what type of cover the fish are using most.  On e I get some bites, I can then use my Side Imaging to find more targets like it in the area, as well as give me something to try and mimic.”

Get Bites
He said his first priority is to get bites.  While that may seem to obvious a goal, he is careful to point out that while some anglers are looking for unique patterns within a pattern, his unfamiliarity with a boy of water dictates that he start with a more reasonable goal.

“I need to locate areas that I can get a lot of bites in; especially on the first practice day,” he said.  “Once I do that, I can start to refine the details of the area; which usually happens as the tournament progresses.”

Application
One such example of his approach from his rookie season on the FLW Tour occurred at Lake Guntersville; the final event of the 2010 season.  He said he had tried an area that he knew was a fairly common area during the practice; one he considered a community hole.  He said that it had produced the most bites for him during his practice round, so he started there.

Once he got to his area in the tournament, he started receiving a few bites on the Casting Jig, but the bite shut off after he caught a few.  He made the switch to the Carolina rigged Roboworm, and was able to trigger more strikes out of the area.  The more he was able to fish the area, the more he learned about it, which improved his productivity; he even weighed in a nine pounder off of the spot.  He finished the tournament in 18th place; his highest of the season.

“If I had been wandering around looking for specific things, I probably would have overlooked the spot,” he said.  “But, by just trying to get bites, I allowed myself the chance to figure out what the spot had; even though I knew nothing about it before I got there.”