When They Pop Up with Joe Thomas

One of the most exciting and dynamic times of the year to go fishing is the pre-spawn phase.  During this particular season, bass in lakes across the country will be aggressive and easier to catch; most of the time. 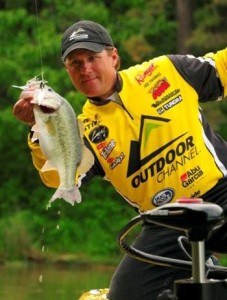 When the water start to warm up, bass will move from their deep water haunts to their staging areas. These are the areas that they will hold in until it is time to commit to the shallows and settle in for the spawn.  Often times, staging areas will be the first transition zone towards the creeks from deep water.

Their holding areas may be a grass line, it might be a depth change or it could be the first set of docks inside a cove from the main channel.

But, where do they go from there between the staging area and the actual spawning area, and how can an angler exploit the aggressive nature of these fish.

FLW Tour pro Joe Thomas; the host of Stihl’s Reel in the Outdoors and Ultimate Match Fishing, said that he has a certain set of areas that he likes to target.  His approach is to use one of a few techniques to locate them quickly, then makes an adjustment to capitalize on what he’s found.

“When the water temperature reaches the mid to upper 50’s, the whole lake kind of opens up to the angler,” Thomas said.  “Areas that have the right temperatures, and some form of visible cover are usually the fastest to unlock; and they can produce real results.”

Where to Start
Thomas believes in maximizing his time on the water; thus, he looks for areas that allow him to employ a systematic approach to pinpointing their whereabouts.  “If I am practicing for a tournament, I only have so much time to find productive water, so I look in places that allow me to move quickly,” he said.  “The upper ends of the main tributaries of a lake hold the biggest populations of fish and warm faster with runoff; so I look for areas adjacent to the main channels.”
While it may seem that the main creeks offer the most logical place to begin his search, Thomas actually finds that they limit his time.  “The main creek channels have more water in them, so they take longer to warm up,” he said.  “What I start my search in are isolated pockets along the main tributary; those are the fastest to warm up in the spring.”

His search begins in pockets that are 50 to 100 yards deep, and have some semblance of cover in them.  “If they have docks lining them, or laydown trees and stumps in them; I start there,” Thomas reported.  “I typically don’t see rock as the best producer this time of the year; they seem to prefer wood; so I start my search in those pockets.”

The one difference he revealed was if a lake had a high concentration of aquatic vegetation; he said it would hold the most fish in that instance.  “They seem to favor weeds if it’s present as opposed to wood,” he said.  “If the lake has a lot of grass; edges will become my first spot to look.”

Practice Approach
As stated earlier, Thomas prefers a systematic approach to triggering strikes in practice.  “I’ll have four rods on my boat,” he revealed.  “I’ll have a crankbait, a spinnerbait or Chatterbait style lure, an Arkie Lures jig and a Texas rigged soft plastic lizard are my choices.”  Those basic starting points have a few fallback options though.

If the pocket has sparse wooden cover, he begins with a Lucky Craft RC 1.5 square bill crankbait in Copper Green Shad color.  “I can cover water quickly and bounce it off of cover to generate strikes in slightly stained water.”  He throws the crankbait on 14-pound-test fluorocarbon line, a 6.2:1 retrieve reel and a Lucky Craft Deep Strike cranking rod.

If the water has more color to it, and there is wind present he turns to a spinnerbait or Chatterbait style of lure.  However, if there is little wind or he feels that the anglers are throwing a lot of bladed baits, he turns to a more subtle approach.  “I’ll go to a swim jig if the fish are not committing to a blade bait,” he said.  “I usually go to a bluegill colored jig with a matching trailer.  The swim jig allows me to cover water with a little more subtle approach, but still move quickly.  Arkie Jigs and I have been working on a prototype head that allows an angler to cast a 3/8-ounce lure that planes effectively, and those are what I use.” 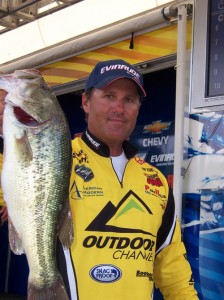 If he finds the cover is thicker, then he reaches for his Lucky Craft Flippin’ Stick and either the standard Arkie jig and soft plastic trailer or the Texas rigged lizard.  He targets the first visible cover and pitches the jig or lizard to the individual targets.

Expansion
Once he has established the location of his fish, Thomas makes a plan to try and locate similar fishing areas.  “Once I start getting consistent bites in similar pockets, I’ll be able to try and expand from there,” he said.  “If I am catching bass on laydown trees in pockets on the right hand side of the main tributary, then I can try to locate more of those with biting fish.”
He may catch one or two fish in each pocket, then move on to the next one to avoid overfishing them.  “My hope is to find several pockets that I can turn into a milk run come tournament time.”

Tournament
Thomas usually begins the tournament with a similar approach to practice, although he becomes a bit more methodical in his movements.  “I still want to cover water, but because I’m in the tournament, I tend to cover the water more thoroughly,” he said.  “I will make several casts with the moving bats to the same piece of cover, and I will slow down and thoroughly flip the heavier stuff when I come to it.”

Final Tips
Thomas said to bear in mind that spring brings new opportunities, but not everything new is best for the bass.  “I would caution anglers to stay out of the extreme upper ends of the lake with new runoff,” he said.  “In most lakes, the water gets way too dirty, and those fish can be really put off by cold muddy water.”

The one time he said he might look at that scenario is on ultra clear bodies of water.  “There are times that the dirtier water can trigger fish in clear water lakes,” he said.  “But, as a rule, I look for areas with less runoff in the spring.”