Swimbaits account for more big bass every year than most of us can even truly count. The combination of an eight-inch trout shaped swimbait and giant bass gets most everyone’s heart pumping. Movies, companies and complete websites have been devoted to the swimbait lifestyle. Whole legions of anglers across the country have found out how successful swimbaits can be.

But, as effective as the large baitfish imitators can be, most anglers barely scratched the surface of their effectiveness. Sure, a lot of big fish are caught each year on swimbaits, but is it a result of careful planning and strategizing, or is it a matter of being in the right place at the right time? 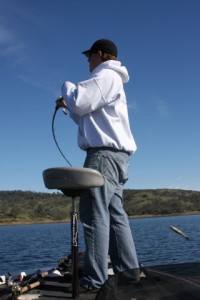 Matt Allen is a devoted trophy hunter from Vacaville, Calif. who has spent the last ten years perfecting his approach. His trophy hunting career has resulted in 50 bass over 10 pounds; including 13 over 12 pounds and a personal best of 17 pounds, 2 ounces,; 70-percent of them coming on swimbaits.

His penchant for producing giant bites is a result of studying not only his own prey, but it also comes from understanding the food sources that giant bass consume their everyday lives in pursuit of. “Many of the big fish that are caught on swimbaits each year are caught almost by accident,” said Allen. “Most anglers have a good enough understanding of bass movements that they can make run into quality fish, and the swimbaits do their job; they make big fish bite.”

But, Allen said that to truly understand how to consistently catch giant bass on swimbaits, an angler truly needs to understand what makes giant bass different than the rest of the population. It starts with understanding their forage, how they position themselves to capitalize on the movement of their prey, what the prime trophy hunting conditions are and how to present the lure to fool them.

These factors are all different than one might assume. Included in that theory is that people live on the theory that most big fish are caught around the spawn. Allen believes that prime time is from January through March. In other words; swimbaits – the time is now. 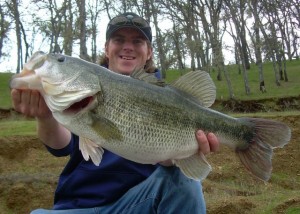 Why Now?
Allen said that the reason the best time to catch truly big bass in the late winter through early spring is a combination of factors. “First of all, big fish act differently and feed differently,” he said. “Water temperature means nothing to big bass; they feed when and how they need to, and for these fish, their primary food sources are most active in cooler water.” His belief is so strong that he removed the water temperature factor out of his mind by removing temperature gauges from his boat until recently when he installed new electronics.

“In my area of the country; the West, big bass feed primarily on pelagic species of fish as their primary forage,” he said. “Pelagic fish are not shore relative species; they swim in open water, so big bass basically become pelagic in their mannerisms as a result.” Pelagic species use the open water to swim in, they do not relate to shore, so when trout, kokanee, salmon and even shad are the primary forage, big bass adapt by becoming more like their prey.

Allen said that bass use the cover of the depths to hide themselves from their forage base. “They still are ambush predators, but they attack from below with tremendous speed,” he said. “It’ because of that, the best trophy hunting conditions are different than what most people would consider prime bass fishing conditions.”

Prime Swimbaiting Conditions
Most people get excited when they see a pre-frontal situation with a good strong breeze and slightly stained water. Those are perfect conditions for tossing spinnerbaits or crankbaits for numbers of bass; but, they are not what Allen seeks out for optimal swimbait fishing. “Most of my truly big fish come in water that has more than two but less than 10 foot of visibility,” he said. “If I could pick, it would have four foot of visibility with a slight green tint to it.”

He also wants a high sun, largely because of the fact that he is targeting bass that are feeding on pelagic forage. “If the sun is bright, it makes it harder for the forage to see into the depths, but it also makes the bait stand out more to the bass,” he said. “In fact, most of my big fish have come on days that most people would label as terrible fishing days; high sun and no wind.”

“I basically want enough visibility that they can see the lure, hear the feeding stimulus start, but not be able to see the other members of the school being caught too much,” he said. “Those are prime swimbaiting conditions.”

Where to Look
Allen said that finding where big fish stalk prey depends largely on the type of lake. “I’m looking for deep hollows this time of the year; and I usually find those in the middle of coves in the deepest part of that area,” he said. 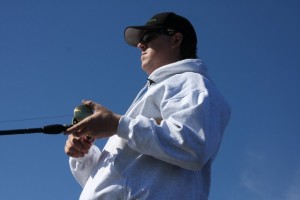 “But, they vary based on what the lake is that I’m fishing.”
On lakes without pronounced points or a lack of large structural items he usually finds them hunkered in the middle of the guts of large bays or coves. These fish will find deep water that they feel comfortable in, but still have a view of their surroundings for feeding opportunities.

On large impoundments, he will often find bass stacked up on the ends of long tapering points. The type of points he is referring to may extend as much as a quarter mile or more into the lake. He will often find fish suspended and stacked together at the immediate end of the points. On smaller lakes, he often sees the same things, but the points are not nearly as long, and they usually end abruptly, meaning the zone may be only a few yards from shore.

“The great thing about locating these areas is that once you find fish there, they are there until they move to spawn,” he said. “This is where they winter, and you can often catch them in that spot for a month or more; provided you don’t have enough water clarity that they see each other being caught.”

What to Use
Allen is a fan of big soft swimbaits. He doesn’t like using hard baits in deep water because he has observed that fish bite hardbaits differently on the surface, and has lost more fish with them deep. He prefers seven to 10-inch soft swimbaits that sink quickly and give him a strong, single hook for landing big fish. He is not a fan of treble hook stinger rigs because he believes they can injure bass and are not truly effective at landing them.

He tosses three main lures, the eight-inch Huddleston Deluxe in the ROF 12, a seven-inch Osprey Tournament Talon with the top hook, and he also uses a now off the market 9.5-inch Baitsmith Magnum Fast Sinking version – when he can find them. “I fish all of my baits out of the package anymore,” he said. “I uses to make modifications, but I’ve found that in most instances, it doesn’t make a difference, so i just take them out and fish them.”

He throws them all on a Dobyns Rods Champion Series 807 Swimbait Rod, which he pairs with a Shimano Calcutta 400B with 5.0:1 retrieve speed. He always uses 80-pound-test braided line and attaches a four to six foot length of 30-pound-test monofilament leader with a nine loop blood knot. He affixes his swimbaits to the leader with a San Diego jam knot. 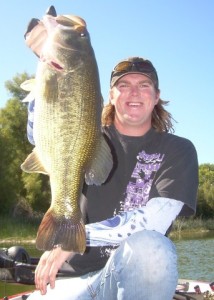 How to Fish
In this cold water season, Allen slow rolls his baits trying to keep them in contact with the bottom. But, the real trick is knowing how to position yourself for the cast. “I retrieve my baits in a different direction based on the type of forage that the fish generally feed on,” he said. “If the forage base is mainly pelagic, then I retrieve uphill, because the bass are looking out, but if there is a large population of bluegill or crayfish in the lake, then I retrieve downhill, because they expect their food to come out of the shallows.”

In case you were wondering, Allen has proved that these tactics are not limited to only Western waters. He has tested them himself outside of California. But, he also operates a website called Tactical Bassin that educates anglers all over the country on his style of trophy fishing. he is getting reports from all over the country about his big bait tactics producing results. Find out more for yourself at www.tacticalbassin.com.