Each year, on some of the best bass fishing lakes in the country, Bill Lewis Lures hosts a one hundred percent payback, Rat-L-Trap Open; a tournament series where fans of the brand can compete against each other

On Sunday, February 12, the Rat-L-Trap Open makes its fifth return to Lake Guntersville, the famed Tennessee River North Alabama bass factory located an hour and a half north of Birmingham.  In the past, more than 200 teams have ventured onto the lake and enjoyed friendly competition throwing the legendary Bill Lewis Lures lineup.

With much of the bass fishing community throughout the country having intimate knowledge of Lake Guntersville, the competition can be stiff.  However, Guntersville has been going through a transition of sorts, with some feeling the lake is either in a down period, or the fish are transitioning from their traditionally recent haunts to new ones.  Couple the way the lake is fishing, and the fact that the area has had a warm, mild winter; the fish are not where they traditionally would be this time of the year.

In an effort to help anglers, Rat-L-Trap pro staffer, Guntersville, resident and Bassmaster Elite Series pro Boyd Duckett shared some thoughts to help anglers catch more fish this weekend.  “We’ve covered how to fish Rat-L-Traps in cold weather before,” he said.  “But, I think this are going to be a little different this year.” 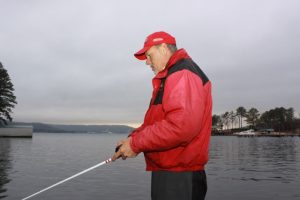 Duckett said that the mild winter will likely cause the fish to be somewhere that the majority of anglers may not be anticipating.  “I was driving around Guntersville breaking my boat in for my season during practice for the FLW Tour event last week, and a bunch of those guys were missing the mark – in my opinion,” he said.  “We’ve had a warm winter, and I would suspect that it will mean a shallower bite than most anglers anticipate.”

Duckett revealed that he saw more than half of the FLW Tour field focusing their efforts on the main lake, and as the first day of the event started, many of the top pros struggled.  “The warm weather we’ve had has brought the fish into the creeks earlier than usual,” he said.  “Normally, at this point, the fish would be in the main lake drains and relating to the deeper edges, but I would start my search in the mouths of the creeks and work into them at this point.”

Baits to Choose
Because the fish may be shallower, Duckett said that anglers would likely have to adjust their lure sizes, as well as their retrieves to adjust to the conditions.  “Because the fish will likely be shallower, the Echo 1.75 and the smaller 1/4-ounce Rat-L-Trap, as well as the floating baits will likely play a role,” he said.  “Making effective presentations in the shallow water are going to be key, and the larger 1/2 to 3/4-ounce baits may get too bogged down to avoid wasting casts.”

He did say that he would still have some larger baits at the ready in case he needed bigger bites.  “I would have a couple 1/2-ounce baits, and potentially a couple of 3/4-ounce versions at the ready,” he said.  “I can use heavier monofilament to keep them off the bottom, but truthfully, I would try to fish them more like a jig on the edges of drains if I needed a bigger bite.” 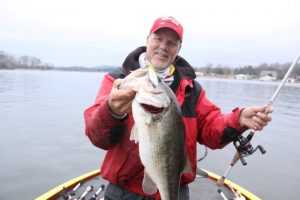 Trap Gear
Duckett said that he would have three rod and reel setups at the ready.  For the Echo 1.75, he would have a 7’ medium action Duckett Micro Magic Pro paired with a 7.1:1 reel spooled with 14-pound-test fluorocarbon line.  He would slowly grind the squarebill around rock, wood and grass.  He would use the same medium action setup paired with 10 to 12-pound-test line for the 1/4-ounce ‘Traps, and for the traditional, 1/2-ounce sizes, he would upsize to 14-pound-test line with the medium-heavy 7’ Micro Magic Pro rod.

Colors
Duckett said that there are three basic colors that he would choose when heading to Guntersville in the spring.  “I would have to have one of the many red craw colors that Rat-L-Trap makes; red is a staple at Guntersville in the spring,” he said.  “I would have a gold ‘Trap tied on, because that is good as well this time of the year, and this year, because the shad haven’t died off, I would have a shad colored bait, but with a pearl base color instead of chrome or translucent.

“It should be an interesting tournament,” he said.  “It’s certainly a lot of fun, and somebody always catches them pretty good, I’m interested to see how it turns out.”

For more info or to register for the 2017 Rat-L-Trap Open, visit here – https://www.rat-l-trap.com/tournaments.php

To get your Rat-L-Traps for the event, visit Monster Fishing Tackle