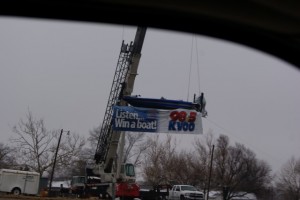 Gene Larew – Boat in the Air

Gene Larew Lures is very busy this week during the Bassmaster Classic.  While being a part of hosting a concert with Craig Morgan on Wednesday, hosting an open house at their Tulsa facilities on Thursday and Friday and having a booth at the show, the company is making waves on the roads as well.

They have “Larew Country” billboards around town, and while they are generating looks, it’s not the way to stop traffic.  They figured out a way to do that.

The company, along with Legend Boats, Honda Outboards and local country music station 98.5 KVOO are giving away a Legend / Honda outboard as a part of a contest to guess how many Gene Larew / Bobby Garland baits are in a 10 gallon aquarium in their facilities and at their booth at the Bassmaster Classic Expo.

Instead of the boat sitting in a warehouse, or on the show floor, they have suspended it from a crane on the interstate heading into Downtown Tulsa.  The boat is lifted into the air during the morning and afternoon drive times daily, and it has quite the effect on traffic.

Gotta give it up to Larew and their partners for pulling off something unique – nice job everyone.

Find out about the contest at www.genelarew.com