Rewind
The 2002 Bassmaster Classic may well be one of the most memorable in the modern era.  Off the water, it was the first Classic since B.A.S.S. was acquired by ESPN.  The ownership of ESPN brought the Classic to the mainstream on the ESPN networks, and with it, a tremendous amount of hope for the future of the organization.

On the water, the 2002 Classic became known quickly as Jay Yelas’ Classic.  Not only because he won it, but also because of how he won it.  Yelas became the fourth angler after Bo Dowden, Stanley Mitchell and Rick Clunn to win the event in wire to wire fashion.  He also became the first angler to have the daily big bass awards all three days of the tournament.

Yelas went into the final day of the tournament with a 10 pound lead, and managed to catch four more bass en route to closing out his championship.  Outside of Yelas’ domination, the 2002 Bassmaster Classic winner’s share reached the $200,000 mark for the first time. The over $200,000 prized was enough to put Jay Yelas to reach the $1 million dollar earnings mark.

The Winning Pattern:
Fresh after closing out his first FLW Angler of the Year Title at Lake Champlain, Yelas went to Ly Lake for the official practice period.  He reported that his six-day pre-practice period a month before the event was one that he handled in a much different way than usual.  “I employed a different strategy to my practice than I had in the past,” he said.  “Instead of running all over the lake trying to find a bite, I chose to focus on one area of the lake and get to know it really well.”
He said his random approach to practice in his previous eleven appearances to the tournament had left him little to cheer about.   “I hadn’t done very well in most of my Classics to that time,” he said.  “My feeling was that I had spent too much time running around looking instead of finding a strong pattern.” 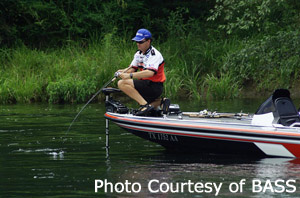 Saying that his decision was made to focus on the river area was based on the potential of the area.  “I always approached the Classic as a winner take all kind of deal,” said Yelas.  “I knew if the bite upriver was on, then I had a chance to be in really good shape.”

He reported having a decent practice, but found one bend in the river that really looked good.  “There was this area that the current hit, and it was full of baitfish,” he said.  “All I could catch out of there in practice were stripers, but the spot had everything it needed to be great.”

When the field returned for the official practice period, Yelas once again went to check his holes upriver.  When he returned to the Striper hole, it had changed.  “When I started fishing that bank I realized that it had changed,” he said.  “The striper had moved out, and the quality bass had moved in.”

While he waited for the current to turn on, Yelas said he would poke around the river area with a Berkley Frenzy crankbait, but once the current was on, he would go to his bank, and pick up a 5/8-ounce Berkley Jay’s Flipping jig.  “When the current turned on at around 11:00AM, I started catching them,” he said.  “I caught six fish that day, including the six pounder.”

Yelas ended up with 18-pounds, 9-ounces and took a nearly four pound lead over Aaron Martens, who had 14 pounds, 1-ounce.

The second day was more of the same as Yelas fooled around with the crankbait early while waiting for the water to start flowing out of the dam.  However, once it did, he managed to catch the heaviest stringer of the day again; a 16-pound, 9-ounce limit that included a 6-pound, 4-ounce largemouth to take the daily big bass honors.

The third day of the Classic did not go as smoothly for Yelas as it may have looked it might have.  Going in with nearly a 10-pound lead might have led people to feel like he wouldn’t have a care in the world.  That may have been the case; however, the fish didn’t cooperate. 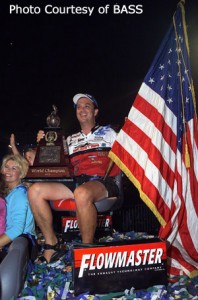 He said that he thought about leaving the area multiple times. “There were several tense moments of decision making on that final day,” Yelas revealed.  “I had a big armada of spectators upriver with me, and I wasn’t getting bites, so I thought of leaving several times.”

He eventually decided that he could stay put, and hopefully get enough bites to close out the win.  “It took a while, but I was able to scrape together four fish,” he said.  “One of them was almost a five pounder, and that helped a bunch.”
Yelas brought his four fish to the Birmingham Jefferson Convention Center, and watched as the scales hit 10-pounds, 11 ounces.  The weight was enough to give him a three day total of 45 pounds, 13 ounces, which bested Martens by a little more than six pounds.

Wrap Up:
Yelas said that the difference in his career before and after the Classic victory was huge.  But, it wasn’t just because of his Classic win; it was aided by his FLW Angler of the Year title a little more than a month prior.  “I was definitely at the highest point of the sport and my career at that time,” he said.  “As far as personally, it made a big difference in how I was compensated by my sponsors and that helped on the financial end.”

He also said his peers recognized the accomplishment for what it was.  “They all know how hard it is to win a tournament, let alone the Classic,” he said.  “So the encouragement and acknowledgement I received from them were great feelings.”

Ultimately, Yelas said he realized that the win was a blessing more than anything.  “God’s hand was all over that win,” he said.  “He put me in the right place at the right time, both on the water and off.  To win the way that I did is only something that could have been a gift, and to do it when ESPN had just taken control of the company, and the amount of publicity that brought with it was huge.  The whole thing was a blessing; one that I’ll never forget.”