Rewind
The 2001 Bassmaster Classic marked the return of the event to the Louisiana Delta.  Previously held there in 1999 when Davy Hite claimed his Bassmaster Classic title, the summer showcase event brought the focus of the sport back to the Big Easy.

The 2001 Bassmaster Classic also marked the breakthrough performance of Michigan’s Kevin VanDam; the then “Kalamazoo Kid.”  VanDam had made his mark on the Bassmaster Tour with six wins and three Angler of the Year titles at that point.  However, as was often pointed out by the media at each of his previous 10 trips to the Classic; he had yet to win the event.  He had been close, in his first 10 Classics, he had only finished out of the top 15 one time; but victory had eluded him.

2001 would change all of that, with VanDam winning by less than a pound.

The Winning Pattern:
VanDam said that he did not have warm fuzzy feelings about how the tournament would go after his practice period.  “I had a horrible practice when we were down there for the pre-practice period,” he said.  “I took my dad with me for the practice, and in super hot conditions, we fished as much of Bayou Black as we could, and we got three or four bites a day; it was terrible.” 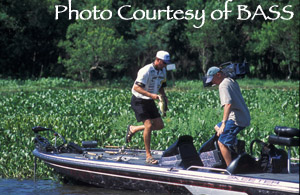 VanDam with One of His Winning Fish – photo courtesy B.A.S.S.

His practice left him feeling flat.  “Because it was the worst practice I’d had for any of my Classics until that time, I wasn’t really excited about the chances,” he said.  “In fact, I had zero expectations when we went back down there for the official practice and the tournament.”

He made the decision to make the hour and a half run; which is relatively short for the Louisiana Delta, and try to maximize his fishing time in the area that he was able to generate bites.  His approach was going to rely on two lures and move quickly through his areas trying to trigger strikes.

His lure choice revolved around the cover he was fishing.  If he was fishing into “overhead cover,” VanDam used a ½-ounce Strike King Premier Elite Jig with a Zoom Chunk trailer, but if the cover was sparse as he moved between targets, he would swim a new creature bait; a Strike King Wild Thang over the bottom and around sparse clumps of hydrilla.  Both of his lures were black and blue.  His overhead targets consisted of matted weeds, Hyacinth and Wellheads in the Bayou.

Because he was trying to maximize his fishing time, his approach was to spend short stretches of time on each individual target.  “I’d spend maybe 10 minutes on each piece of cover with the jig then move to the next one,” he said.  “When I was moving between targets, I would swim the Wild Thang looking for bites in the more open water.”

His first day produced an 11-pound, 5-ounce limit, and despite what he thought was a slow day, he found himself in third place.  “I really realized at that point that I had a shot to win if I was able to pull things together,” he said.

He returned to the Black Bayou area for the second day and was consistent in finding his solid keepers.  “I kept waiting for a four pound bite, but never found one,” said VanDam.  “What I was able to do was catch solid keepers, and keep looking for the bigger bite.”  Not that catching keepers was easy, VanDam said that he was scraping together his limit each day.  His mining of the Delta produced a 10-pound, 2-ounce limit on day two, but when fist day leader David Walker stumbled, VanDam had enough to take the lead after two days.

Day three did not start out as he had planned.  His taking the lead meant more spectator boats following him, and the larger crowds presented problems in the shallow canals he was fishing around Bayou Black.  By 11:00AM, he had two keepers in his livewell, and he felt the need to make a change.  “I decided to make a run and fill my boat with gas at that time,” he said.  “What I was hoping was that the run would clear my head, and I might be able to shake some spectator boats while I was doing it.”

When he returned to his fishing grounds, VanDam said he started getting bites.  “I went on a little bit of a flurry,” he said.  “I caught two keepers off of a well head, and then a little while later I caught my fifth one, but it barely weighed a pound; I knew I needed one more fish to give myself a solid chance.”

He fished hard for the next hour, pounding the water with precision presentations.  However, when the time came to return to Bayou Segnette State Park, he had not been able to cull that small keeper.  “It was one of the longest runs I’ve ever had to make,” said VanDam.  “I kept running it through in my head, and I knew that I hadn’t done my job; I knew that one little fish was going to cost me the Classic.”

With the day three weigh-in happening at the Louisiana Superdome, B.A.S.S. Officials organized the anglers in the position they thought they would finish; VanDam was not the last in line.  As he weighed in his 10 pounds, 14 ounces, he took the hot seat on the stage as the leader of the tournament with only two anglers left to weigh. 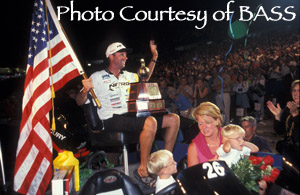 Scott Rook finished his tournament with a solid limit, but he fell just short.  When Kentucky’s Walker took the stage VanDam snuck out of the hot seat to get a peak at the scales.  When Walker’s weight bottomed out at 10 pounds, 13 ounces; VanDam had won the Bassmaster Classic.

He said that quickly rotating through targets trying to locate productive ones was his best strategy. “Once I found something that would produce a fish, I would hit that several times in the day,” he said.  “In fact, I caught three of my keepers the first day off one well head, and I caught keepers each day off of one laydown.”

Wrap Up:
Thinking back to winning the Classic, VanDam said that the biggest change for him was knowing what he had accomplished in the eyes of the world.  “The Angler of the Year has always been the toughest title to win, and that had always been my biggest goal,” he said.  “But, winning the Classic is the biggest deal in the eyes of the fans, our sponsors the industry and the media.”

He also said it was good to not have to answer those lingering questions from the media.  “The late Tim Tucker used to ask me before every Classic if I was going to be the best angler never to have won a Classic, and I have to admit, his question was always a little frustrating,” said VanDam.  “It felt good to win and to do it under very tough conditions on the Louisiana Delta was even better; it was a huge accomplishment.”