Now that we’re in the throes of winter throughout much of the country, people have settled into their cold weather programs. If they’re fishing at all, warm undergarments and Gore Tex outer garments mean that anglers often slow down their own movements.

While the bass often do the same, it doesn’t necessarily mean that fishing has to slow to a crawl. For anglers who love to fish fast, the winter time can quite literally be a drag. While the bottom hopping lure is slowly dragging along the bottom, the angler is becoming more and more frustrated. 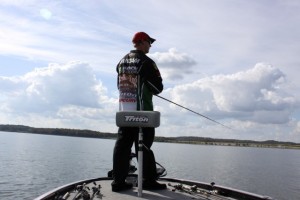 Jonathon VanDam is one of those anglers.

VanDam, as the name suggests, loves to keep moving while he’s fishing. On a normal fishing outing, he will likely cover water like a marathon runner and he pushes the limits of his equipment trying to evoke reaction strikes.

While the cold doesn’t allow him to burn a lure through the strike zone, VanDam is not one to give up on his favorite fish producer; a deep diving crankbait, altogether.

Crankbaits in Winter?
“Absolutely,” said the second-year Elite Series pro. “You might have to present it a little differently, but fish will strike a crankbait when it is presented right.”

VanDam is quick to point out that he may have to use other lures to fire up a school in cold water, but once he does, he often turns back to a crankbait. “I may locate them with a spoon or a jig, but one they start biting, I usually try a crankbait,” he said. “Even at slow speeds, the crankbait is more efficient getting to and through the strike zone than most other lures, so I like to use it.”

Location is Key
The Kalamazoo, Mich. pro tends to move towards the main creek channels this time of year in his search for bass. His feeling is that bass often use calmer water to sort of hibernate in, as opposed to the water on the main lake that has more current in it.

“I try to find the main creek channel in a creek arm,” he said. “Once I locate that, I can start looking for areas that a point intersects with it, or a defined creek channel bend; I often find concentrations of bass.”

That’s not to say that the search is easy. Bass can often find a way to seemingly disappear in the water column, but once he locates those types of schools, he tries to trigger them in a feeding frenzy.

He said that he likes to have a little breeze on the water, but not a stiff wind like he prefers in the warmer months; and, he also said that he feels it is best when there is some sun shining to help bass become a little more active. 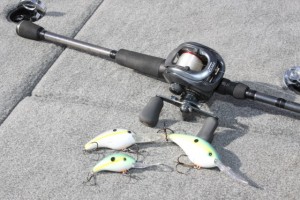 Cold Crankin’ Tools
His favorite approach utilizes the Strike King 6XD or a Series 6 crankbait, and as a result, he uses the same crankbait rod he would use if he was targeting summer ledge fish. His choice is a 7’11” medium heavy Shimano Crucial crankbait casting rod. While he normally chooses a Shimano Core in warmer weather, he turns to the 5.5:1 Chronarchin colder water; he spools the reel with 12-pound-test fluorocarbon line.

One other trick he uses to keep soft biting fish hooked is to use the Lazer TroKar TK310 Extra Wide Gap treble hooks. “These fish often bite really light, and sometimes only the back hook,” he said. “The TK310 is the sharpest treble on the market and it really holds them well; so, I change to the 1/0 size on those big plugs and upgrade my hook to land ratios.”

Slow Grind
He makes the same long casts that he does throughout the year, but he really works to move the bait slowly through the strike zone. “If the fish are suspended off the bottom, I slowly roll the bait through the school,” he said. “If they are on the bottom or holding right on the channel bend, then I try to slowly crawl it across the bottom, hitting rocks, stumps and cover as much as I can.”

One thing he does differently in the winter is allow the lure to pause for longer periods of time. “I may stop reeling for a count of one or two in the warmer seasons,” he said. “But, it may four or five times that amount in the winter.”

He even said he uses his crankbaits similarly to a cold weather jerkbait from time to time. “I will get the lure down deep and use the rod to slowly pull it forward instead of reeling it,” he said. “When I pause to take up the slack, I let the lure pause, and that’s where strikes often come.”

If the fish won’t strike a lure that slowly floats towards the surface, he will use an Eagle Claw HP clip weight designed by Elite Series colleague Shaw Grigsby. “I will put that weight on the front split ring and make it suspend a little better,” he said. 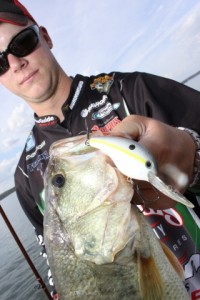 Special Thoughts
Finally, he admits that sometimes Florida Strain largemouth can be especially difficult to make strike in cold water, so he finds less of that particular strain of black bass that strike crankbaits readily in winter. However, lakes that have a good population of Northern Strain largemouth, smallmouth or even spotted bass are perfet for the technique.

“I’m usually targeting better than average sized fish with this approach,” he said. “These are the kind of bass that can get you a really high finish, or even win a tournament. You just have to be patient and literally grind them out, but it can be a dynamite approach.”