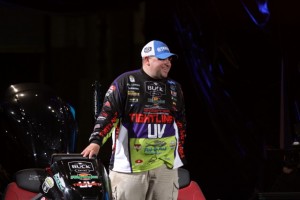 Over the past several years, the name Bill Lowen has become synonymous with swim jigs. Because the Brookville, Ind. pro cut his teeth fishing the Ohio River, he developed a knack for catching bass in the shallow waters there with a swim jig and trailer. The truth is that the swim jig has become one of his primary tools; especially in shallow water.

But, as his career as a Bassmaster Elite Series pro has evolved, so has his understanding of the use of the technique in different waters. While he has primarily viewed a swim jig as a very shallow water tool, he has begun to use them deeper.

“I’ve always told people that they should think of swim jigs in the same realm as a spinnerbait,” said Lowen. “They are used in much the same way, but don’t need the same turbulent conditions as a spinnerbait to be effective. Spinnerbaits need wind or dirty water, and a swim jig is better in calmer conditions or clearer water.”

When to Swim Deep
Lowen particularly likes a swim jig on calmer days when bass are holding on deeper grass edges, or when there is new growth grass that is only just coming off the bottom. “I usually find these areas with an ima Lures Square Bill crankbait, but when the crankbaits bog down in the grass, a swim jig will let me fish through it more easily,” he said. “The whole key is to be able to glide it through or just over the grass without getting it lost in the cover.”

He said he has a maximum depth that he feels they are effective. “I really feel like 10 foot is the deepest I can be effective with it,” he said. “Any deeper than that, and there are techniques that more effective.” 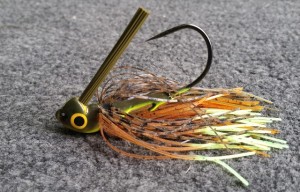 Swim Jig Setup
Lowen uses his Davis Bait Company Bill Lowen Signature Swim Jig exclusively, and in deeper water, he prefers the 3/8-ounce model. “I want the jig to stay down, but it has to be light enough to not bury in the grass,” he said. “The other thing about a swim jig is that is has to be perfectly balanced so that it swims straight, if it doesn’t, then the hook can snag in the grass. My signature Davis Baits jig is perfect for that.”

He throws his jig on a signature 7’6” Bill Lowen swim jig rod by Castaway Rods. “It’s actually not on the market yet, we’re in the final stages of testing,” he said. “It’s basically got the backbone of a Flippin’ Stick, but has a lighter tip like a spinnerbait rod. I need the rod to have enough tip so that it can load when a fish takes the bait, but the right power to set the hook and control them after.”

He pairs that with a 7.5:1 gear ratio Lew’s Team Lew’s LTE reel spooled with 30-pound-test Hi-Seas braided line. He said the high sped reel allows him to catch up to fish when the strike and swim towards him as well as when they go ballistic after the hookset. The line helps him have ultimate feel of the lure and the additional power to set the hook.

Jig and Trailer Combinations
Lowen is a believer in keeping his colors simple. When it comes to colors, he throws a shad color in clear to stained water, black and blue in stained to dirty water, and he always has a green pumpkin based, bluegill type color for when the bass are protecting from, or feeding on bluegill.

His trailer choices are where things become more complex. “Trailers are the thing that you can fine tune to get the right reaction out of the fish,” he said. “You never know each day what style trailer is going to get the right response, so you just have to play with it until you figure it out.”

With that said, he has a range of trailers he carries for use when bass are in different moods. He changes trailers until he figures out which will make the bass commit. “Here are my guidelines for you to consider,” he said. “If they follow, but don’t eat it, then the color is right but the trailer action is wrong; that’s when I start experimenting.”

He breaks it down by category of action
Subtle – a straight chunk style trailer – This is when bass are in a passive mood
Swimming or Curl Tail Trailers – Double Tailed or Single Tailed Grubs – This is a medium action trailer when bass are not completely aggressive, but also not passive.
Flapping Style – Tightlines UV Whisker Texas Rig Craw or similar – This is for times when bass are extremely aggressive and chasing.
Shad Action – 3.5” Optimum Double Diamond Swimbait – This is a boot tailed swimbait styled trailer for when bass are chasing shad. 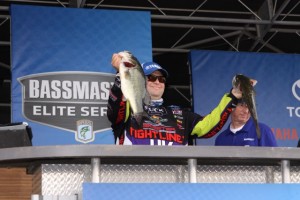 Retrieve
He makes his presentation to the edges of cover, or across the area where the new grass growth is, and allows it to sink to the level of the bass. In the case of the edges of grass, he wants to keep it as close to the edge as possible without burying up inside the heavier grass. In the case of the short grass that has not yet grown to the surface, or is the trailing edge of a grass bed, he reels it just fast enough so that it ticks the tops of the grass clumps.

“I don’t want the lure to be dragging through the grass, but I do want it to be ticking the tops,” he said. “If I do get bogged down in a clump, I keep reeling until the lure breaks free, and the action of the rod snapping back creates enough action; I don’t want to jerk the rod.”

Overall, he keeps his rod tip in a position that allows a slight bow in his line, and shakes the rod tip so that the lure jiggles and quivers along its path. “That’s the retrieve that has always given me the best response,” he said.

“I’ve always tried to help people understand that fishing a swim jig is much the same as fishing a spinnerbait,” he said. “It allows you to fish it in heavier cover, and calmer conditions. Other than that, and the retrieves and the bites you get from bass are very similar.”