Terry “Big Show” Scroggins has competed in 194 B.A.S.S. tournaments, but just prior to the start of the Busch Beer Bassmaster Elite, he confessed he’s never experienced a lake like Cayuga. From ocean like depths, to a reverse order spawn, and rumors of a sea monster – indeed this one is different for the highly likeable Floridian and his fellow pros.

“Man this lake is crazy,” smiled a wide-eyed Scroggins. “I was running along yesterday during practice, and glanced down at my sonar screen, and it read 378 feet deep – heck, I thought I was in the ocean off of Key West.”

Scroggins’ sonar wasn’t wrong. In fact, Cayuga’s maximum depth is 435 feet, and it’s the longest of the glacial Finger Lakes, running 37 miles from north to south.

“Right here at the weigh-in dock on the north end, I’m reading 71 degrees, but it gets as cold as 54 degrees down south, and that’s got the order of the spawn all messed up,” says the former auto body technician. 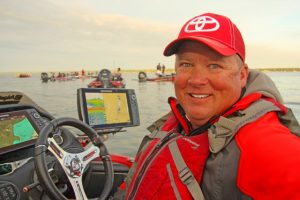 “The largemouth on the north end are actually spawning before the smallmouth here – and I’ve never seen that in my life – smallmouth typically always spawn before largemouth,” he explains.

“The largemouth here are in all phases of the spawn,” says Scroggins. “I’ve seen some on beds, and I’ve caught some skinny post-spawn largemouth as deep as 14 feet, but all the smallmouth I caught in practice were fat and chunky pre-spawners.”

So does all this uniqueness have Scroggins spun-out mentally? “Nah, this lake is loaded with fish, I had a pretty good practice, and because of those extreme depths, you know the bass obviously aren’t living in a large portion of the lake where it’s several hundred feet deep, so you can eliminate a bunch of water really quick,” he explains.

That’s good news. But there is one last Cayuga curveball for the former high school baseball pitcher. A sea monster they call “Old Greeny” that’s rumored to live here.