Mike Iaconelli stepped out of his Toyota Tundra on the final day of practice for the Busch Beer Bassmaster Elite at Cayuga Lake and said, “I love this place, I always have, I used to say when I’d come up here fishing in my amateur days that someday maybe I could buy a place up here in the Finger Lakes area.”

Iaconelli’s roots to Cayuga run as deep as its staggering 435-feet maximum depth. Back to his days competing in Red Man tournaments that began to prove his pro potential two decades ago. He knows Cayuga is loaded with quality fish, and neither “Ike”, nor his fellow pros, are sandbagging on the eve of what’s sure to be a multispecies slugfest.

1.) Greg Hackney averaged 21-pounds per day when he won the Bassmaster Elite Series event here in August, 2014. How much weight per day will it take to win this week?

“Wow! Did he really? I didn’t realize his weights were that heavy. My best guess is 18-pounds per day this year to win.”

2.) Will you spend the majority of your time fishing greater or less than 10-feet deep?

3.) Name three lures we’ll see tied on the most among the entire Bassmaster Elite Series field?

“Texas-rigged plastics, and a heavy punch-skirted jig for getting through the vegetation to largemouth on the very northern part of the lake. And thirdly, a wacky-rigged worm or soft stickbait for smallmouth on the lower ¾ of this lake.”

4.) Will you spend the majority of your time targeting smallmouth or largemouth?

5.) You’ve got a wide assortment of rods and reels rigged for the final day of practice – what style of reel do you think you’ll use most in the tournament — spinning or baitcasting?

6.) After two 14-hour days of practice, what do you think will be the biggest “X factor” in this tournament? 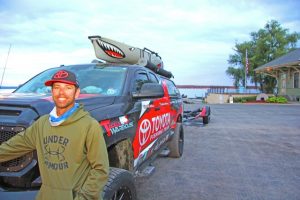 “Weather. We’ll have clouds and cooler weather for Day 1 on Thursday, but then the rest of the tournament will be sunny and hot – so fish could position a lot differently later in the tournament than what they will on Thursday.”

7.) Lastly, a question not directly related to fishing. You’re a big sports fan, and in the past three weeks there have been some amazing events. Muhammad Ali died. The Penguins won the Stanley Cup. Lebron James gave his hometown their first championship in 52 years. Dustin Johnson returns from personal struggles to win the PGA’s U.S. Open, and Greg Hackney won BASSfest.  Which of those resonates most with you?

“Lebron bringing home a long awaited championship, because he performed like a champion to win a long awaited title for his hometown in his sport’s biggest game, under a ton of pressure. That’s what a champion of his caliber is expected to do – and he delivered.”