Turnover a New Leaf in Fall – with Mark Menendez 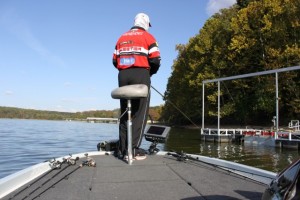 There are many good things about turnovers.  Those flaky pastries full of fruit with a little bit of icing on top can be just the right dessert after a great meal.  However, in a few sports, namely football and basketball, turnovers can be the death knell for a team.

The same can be said for bass fishing.

One of the scariest, most frustrating times of the year to fish for many anglers is during the fall turnover.  In fact, any time there is significant change to the bass’ environment, then it can be frustrating.  However, to anyone with the thought that change equals opportunity, the turnover is a chance to take advantage of a dynamic situation.

Mark Menendez is more than just an angler.  The Elite Series pro from Paducah, Kent. is a professional angler, but he is also an angler with a degree in Fisheries Biology, so he approaches his job with a scientific mind in many occasions.

“Bass have biological needs, and with those needs in mind, they adapt to their environment,” he said.  “One of those times that is more dynamic than others is around the fall turnover.  It can make fishing really tough, or really good if you know what to look for.”

For those of you not familiar with “turnover,” it is quite literally when the lake water turns over.

Menendez said that there are environmental factors that make turnover happen, and there are some predictable times that it occurs.  “Turnover happens because of a few factors,” he said.  “It is the time that the water quality on the bottom has expended all of its nutrients and oxygen, and the surface water gets cold which makes it heavier than the bottom, so the water mixes from top to bottom; or turns over.”

He said that the turnover happens when days get shorter, nights get colder and the surface temperature begins to cool off into the low 60s down to the mid 50’s.  “This usually happens as summer begins to end and we start getting cold Arctic storms blowing in out of Canada,” he said.  “When that happens, the water color will start to change to a milky or rusty color, and it’s not because of any precipitation; that is the beginning stages of the turnover.”

The result of turnover is that the water content of a lake becomes the same throughout for the most part.  Oxygen content, water color and temperature all become consistent.  This spreads baitfish out, and they can be anywhere, at any depth; thus, so can the bass.

Menendez said that it is this component of the turnover that creates problems for anglers.  “There are usually too many options for most anglers out there at this point,” he said.  “They 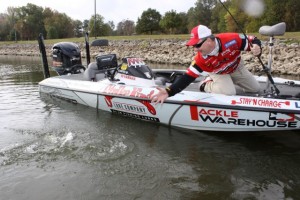 see fish everywhere on their Lowrance fishfinders, and they start trying to do everything, so they get scatterbrained.”

Fishing Turnover
Menendez and his tour professional counterparts encourage anglers to fish their strengths; especially when it comes to  competing in tournaments.  “Anytime we start trying to do things

that we’re not completely comfortable with, we create potential problems for ourselves,” he said.  “This time of the year is especially important because we will see so much that looks good.”

Menendez said that he often sees clouds of baitfish and groups of bass in water as deep as 40 to 60 feet, but he chooses to ignore them most of the time.  “I’m not as skilled at catching truly deep fish as some of my competitors are,” he said.  “So, I tend to try and fish in ways I’m most confident and spend my time casting instead of looking.”

For the three-time B.A.S.S winner, this means shallow water.  “I look for areas that will provide the most consistent water quality when I’m fishing the turnover,” he said.  “For me, that means looking at the main river inlets and the major creeks in the lake because current flow will provide the most consistent oxygen content, water quality and baitfish; even if it is a little colder than the rest of the lake.” 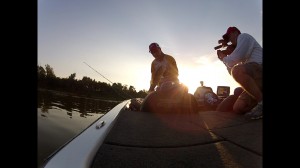 When he begins his search, Menendez likes to target docks that are nearest the running water, and those that are shallowest.  He said that they have to be those that have styrofoam or black plastic floats because they tend to collect the most baitfish to themselves.  “If I can find those in 12 to 18 inches of water, then I’ve found the kind of docks that I’ll be able to catch fish from the best,” he said.  “I hit as many of these as I can and use one tactic with two variances depending on the situation.”

His approach is to skip lures underneath the docks to try and illicit strikes from bass hiding around the floats.  his first choice is a Strike King Bitsy Flip Jig, and his second is to scale it down with a Tour Grade Shaky Head with a Shim-E-Stick attached.

“I like to use a 3/8-ounce Bitsy Flip because its pill shaped head skips well, falls well, and has a sturdy hook,” he said.  “I’ll use a Baby Rage Craw as a trailer if a slow fall is important, and a KVD Chunk Jr. if they need a faster fall.”  He uses a 7’2″ medium-heavy Team Lew’s rod matched with a Team Lew’s Pro or Gold casting reel filled with 12-pound-test Seaguar Invizx Fluorocarbon line for this technique.

If the bite is tougher, but the fish are still in the area, he opts to pick up a 7′ medium action Team Lew’s spinning rod with a Team Lew’s Gold 3000 size spinning reel and eight-pound-test Invizx.  He ties his 1/8-ounce Tour Grade Shaky Head on with the Shim-E-Stick and makes the same skipping presentations.

If he finds no action in the backs of creeks, and feels that he needs to move to the main lake to target fish, he does not try and work his way into the merry go ’round of boats targeting those ultra deep bass.  Instead, he tries to appeal to bass that are keyed on bigger bait.

“The baitfish that you find in deeper water is typically Threadfin shad and smaller baitfish; but the larger Gizzard shad tend to stay shallower, he said.  “I choose to target those fish that 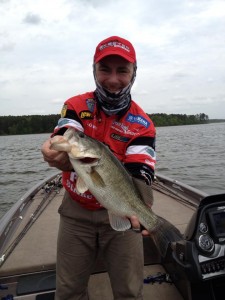 stay shallow looking to feed on those Gizzard Shad.”

He does that by picking a 3/4-ounce Strike King Bottom Dweller spinnerbait; which he modifies by placing a larger blade on the swivel.  “I like to add a size six or seven willowleaf blade to the bait,” he said.  “It really mimic the size of larger Gizzard shad well.”

His retrieve is to move the bait as fast as he can across points or other shallow features.  He said that “burning” is the technical term for what he does, but the larger blades do not allow the bait to move too quickly.  He likes to use this retrieve with a 7’6″ composite Team Lew’s cranking rod with the “Palming” Handle, a Lew’s BB1SHZ reel with 7.1:1 speed spooled with 20-pound-test Seaguar Senshi Monofilament.  He feels the monofilament is important for stretch during the jarring bites that can occur with this technique.

Final Thoughts
Menendez said that anglers need to remember that turnover occurs on lakes that do not have an abundance of current.  Lakes like Pickwick and Guntersville, or any of those on the Tennessee River that are power generating lakes are mixed by the current, so turnover is not a factor on these bodies of water.

He also said to pick your starting areas based on the type of fish you are targeting.  “The back ends of creeks is typically my starting area when dealing with largemouth,” he said.  “If I am fishing for smallmouth or spotted bass, I tend to look n the main lake more; because that is where they tend to concentrate.

“Try not to look at the turnover as a bad thing, as so many folks do,” he said.  “Look at it as an opportunity to catch fish that are moving, it can be a great time to catch a bunch of fish.”