Hey folks, just following up after Kentucky Lake. I got on some really good schools of fish at Kentucky Lake, there were 80 to 100 fish a day is what I found but I just couldnâ€™t crack a 13 pound mark. I really enjoyed Kentucky Lake I just needed a little better fish.

Itâ€™s tough when you only have a limited amount of experience and a little bit of practice time on each of these lakes. You just find what you find and thatâ€™s what you end up doing. I was throwing a Roboworm EZ Shad on a lead head, throwing a Carolina Rigged Brush Hog and even a big flutter spoon and caught a bunch at Kentucky Lake. I had three little schools of fish that I could catch a bunch at but I just couldnâ€™t find any bigger ones and thatâ€™s what it takes there. 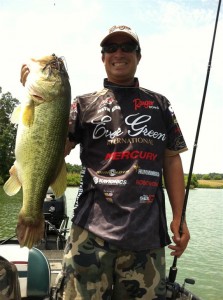 I just kind of feel like Iâ€™ve been one step off my game all year just kind of one step behind not quite on the best stuff. I mean Iâ€™m not doing bad but just need a couple of little things to break through and need a good finish at Pickwick to guarantee myself getting into the Forest Wood Cup. So, thatâ€™s what Iâ€™m going to focus on.

After Kentucky Lake I got a chance to go fish with a good friend of mine Matt Lee over at these little trophy lakes in Alabama. We caught a bunch of big fish at that little trophy lake. We had a fifty pound limit for our best bag there. We were throwing a custom jig there and doing a couple other things but really the jig is what made the difference for us on that little lake and it was fun.

It kind of for me was a big relief after Kentucky where I was doing okay but not great, just missing the money there. It was something I just needed to do, just go out and jack on some fish that were big. It kind of reminded me of the old days at Casitas when we were the first ones out there doing certain things with a swimbait and the big fish would just bite all over the place and this lake just kind of reminded me of it. 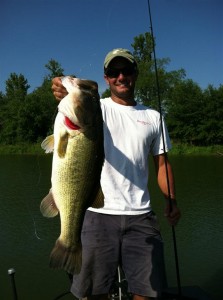 The pond that we were fishing, the lake was built by the same guy that built Ray Scottâ€™s pond and itâ€™s just unreal. Itâ€™s just full of big fish and they are starting to take some private fishing excursions there and there are some guides that work the lake. I can get people a hold of them if they want to. Itâ€™s worth every dime to go there for a day especially when your catching 80 fish a day and a bunch are over five pounds. So, that was a fun day.

Iâ€™m home for just a little bit in Havasu. I did a seminar at Anglers Marine at Santee in Southern California with Shaun Bailey for Evergreen and Ranger Boats. That went really well, we had about 250 people there and it was just really exciting to be a part of something like that.

Iâ€™m just going to start heading my way back to Pickwick. Iâ€™m kind of disappointed that I have to miss the U.S. Open this year but after the Table Rock tournament got rescheduled to Pickwick this time I have to go to the tour event. I did want to fish the U.S. Open, but making the FLW Cup is the first priority.