Las Vegas, Nev. – Aaron Martens of Leeds Alabama holds on to win his third U.S. Open. True Image Promotions; Martens’ Public Relations firm, caught up with him the day after his win, while he was on the road to the B.A.S.S. All-Star event on Lake Jordan in Alabama.

The U.S. Open Tournament
“The U.S. Open is probably the most grueling tournament anywhere,” explained the 2011 US Open Champion. “Mentally and physically this event will push you to your limits.”

“The unique thing about the Open is, it’s the one place where anyone can take a shot at fishing against the sports best like Rick Clunn, Gary Klein, Fred Roumbanis, Mike Folkestad, Morizo Shimizu and more. Then you have the local sticks that come out and mix it up very well. The Western anglers are good, really good, and to compete with them in their backyard is not easy. I love Lake Mead and it’s my backyard too.” 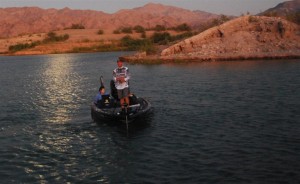 Matching Mike Folkestad with the most US Open Victories (3):
“It’s not about winning the U.S. Open more than anyone else or setting records. To me it’s just about fishing and testing my skills. Mike is 70 years old and he still goes out and works as hard as or harder than anyone out there. I have known Mike since I was 14 years old and he’s paved the way for guys like me to make it on tour from the West Coast. Mike’s somebody I’ve looked up to for a long time and to hold the most wins with him is pretty cool. I actually hope Mike gets his fourth win before I do; but won’t be upset if he doesn’t.”

Fishing with Co-Anglers
“This event is different than most because you fish with a co-angler and you fish as a team, not against each other. I had three great co-anglers and they helped out quite a bit. On day two I had the pleasure of fishing with 13-year-old Carson Sims from Texas. Kids like him are the future of our sport and that is great to see. Just finishing three days of grueling fishing on Mead in the heat is an accomplishment but, he also fished well and caught the big fish on the first day of the event. What was really neat was he donated his $1000 big fish check to the Wounded Warrior foundation. That was great as everyone should care about the soldiers who fight for our country.”

The Baits
“Lake Mead is literally fishing in a desert. I told my co-anglers that it’s a lot like trying to hunt coyote in the desert; they aren’t everywhere so you have to find a coyote here and there. You have to cover a lot of desert to find a lot, but they are there. Bass on Lake Mead are similar; which is why I chose my baits based on covering a lot of water. I used three techniques mostly; a Davis Bait Company X-Vibe spinnerbait, a 4 ½-inch Roboworm on a drop shot rig and a Davis Bait Company football head jig.

Natural colors are important on Lake Mead. The spinnerbait was a natural shad color. I used two colors of Roboworm, Aaron’s Magic and Blue Crawler and the Davis jig was green pumpkin.”

The Equipment
“For the drop shot I was fishing with a 10 to 12 foot leader of 6-pound-test Sunline FC Sniper Fluorocarbon on a 6’10” Megabass Hedgehog spinning rod. The tip of this rod is amazing; I have never seen another rod like it. I used a 3/8-ounce tungsten drop shot weight and a Gamakatsu split shot hook. On day three, I did downsize my line to 5-pound-test to get more bites; Lake Mead will definitely make you a good light line fisherman.

For the spinnerbait I was using 12 and 14-pound-test Sunline Shooter Fluorocarbon on a Megabass 7’2” Racing Condition rod and a 7:1 reel. The rod was key because long casts were a must. My average cast was probably 120 feet with a long cast going over 150 feet. The parabolic action of the Racing Condition rod is perfect and excellent for lighter line reaction fishing because it allows for good hook penetration on the bite, but it doesn’t rip large holes to make the bait fall out during the fight.

One question I get a lot is where to get the Megabass rods that I use. The simple answer is to contact Megabass USA.com or email them at sales@megabassusa.com.

The spinnerbait I used was slightly altered. I modify most of my baits. I cut down the wire about an inch and used only a single willow blade instead of two. I did use a size 1/0 Gamakatsu trailer hook, which is odd because I usually use a size 2/0 or 3/0. I downsized the trailer hook because of the super clear water on Lake Mead.” 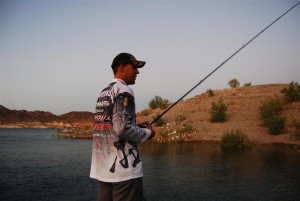 On Lake Mead
“The harder you fish the better you do. I worked my ‘hiney’ off this week. I have never gone five days on only 16 hours of sleep before. I have been fishing the US Open on Lake Mead since I was allowed to. It’s made me the angler that I am today.

Lake Mead can be brutal on boats as well. This was my first trip out there in my Phoenix and I am so happy with this boat I can’t even tell you. In the morning, its calm, but you have to run through ‘the narrows.’ It’s literally the Grand Canyon filled with water. With 400 foot walls on both sides of you; it’s only a third of a mile wide in some places, after a lot of boats run through there it can get pretty bumpy. I don’t want to sound like a commercial, but the Phoenix is awesome. It has a straight V all the way down the boat; there isn’t a flat spot in the back so you don’t have any hard bounces, the Phoenix cuts right through everything.”

The Road Trip to B.A.S.S. All Star Week
“Contrary to some earlier reports, I am actually going to get there with about a half a day to spare; I might actually get a little pre-fishing in. I’ve fished Jordan about a dozen times before and I think I can do well there even with just a little pre-fish. My goal is to win this event. It would be cool to win on the West Coast and then back east; back to back; we’ll see.

One thing I would like to clear up is about the All Star event and my semi-late arrival. After being selected by the fans I had a talk with Trip Weldon, B.A.S.S. tournament director and I was ready to not fish the U.S. Open if they required it. I was given permission by B.A.S.S. to do exactly as I am doing now. I really appreciate B.A.S.S and their understanding of my situation.”

Before I go, I’d like to thank all the fans that voted me into the All Star Week event. I met a lot of them at the U.S. Open and I can’t tell you how much it means to me and it is much appreciated.”