Rewind
Lake Wylie in North Carolina was host of the 2004 Bassmaster Classic, a tournament which carried on the theme of the 2003 classic: “Never give up.” 2003 was a classic that no one will forget as it jump started the career of the polarizing Mike “Ike” Iaconelli. With one scream and perhaps a floor rock break dancing move, Ike became a household name in the bass fishing community and immediately garnered media attention that was completely unheard of for a bass fisherman.

In addition to an exciting finish, the 2004 classic was the most significant event in bringing bass fishing to the international level. Takahiro Omori became the first, and currently the only, foreign angler to win the Bassmaster Classic. The tournament also handed Aaron Martens his second runner up finish in a classic.

Omori had already proven himself to be a great angler. He had four years of professional angling experience under his belt and was known to be an exceptional power fisherman. The final step to achieving his life-long goal was a Bassmaster Classic victory.

The Winning Pattern:
Omori found fish in shallow, stained water buried in heavy cover during his pre-practice. His pre-practice mentality to was to find fish that suited his strengths of power fishing. “I knew that this tournament would be won up shallow. You might do pretty well deep, but the shallow fish were the winning fish,” Omori continued, “My biggest concern was actually the weather, I knew the fish would be there, but I didn’t know if they would be feeding.” Omori paid close attention to the weather leading up to the tournament and was not disappointed by the heavy rains that stained his best water. His dream conditions had presented themselves; stained, high water with current due to water being released in order to maintain the lake levels.

The first day of the tournament couldn’t have gone any better for Omori. He followed his game plan to the “T” pitching a Yamamoto creature bait to fallen trees and stumps. He fished flawlessly and left the fish biting with hopes of saving some fish for the remaining two days.  His limit of 16lbs 2oz placed him atop the leader board with a ten ounce margin over second place angler Dean Rojas.

Day two was not nearly as productive for Omori, as he stuck to his guns and flipped up a limit of bass, but he lacked the size he caught the day before. The weight of his day two limit fell to 9 pounds, 8 ounces which dropped him in the standings.  He was baffled at the diminishing of his quality fish. Same spot, same bait, same presentations, but much different results. Omori remembers thinking that his location still held good fish, “I couldn’t even sleep that night, I knew that the fish were still there and I was going to have my chances the last day.” He still maintained second place behind Rojas, but the top ten anglers closed the gap and made it anyone’s game heading into the final and deciding day of the contest. 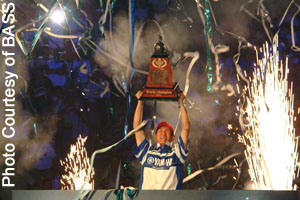 The third and final day of the classic was a nightmare for Omori. He fished his water thoroughly, flipping his bait to every nook and cranny of the visible cover that littered the bank. He knew the bites would be few and far between but confidence in the area kept him positive all day.

During the day, he had two major setbacks he thought had cost him the classic. “I lost a five pounder and I was really mad,” what happened next is a lesson for all anglers to learn from, “I was so upset about the missed opportunity that I lost my composure. I was very angry and when I got another bite I set the hook way too hard. I broke 50 pound braid on that bite,” Omori exclaimed. As his time grew increasingly shorter he made one of the best audibles in the history of the classic. He abandoned his flipping stick and pulled out his crankbait rod armed with a yellow Bagley B2 shallow-running crankbait. His first cast with the crankbait resulted in a keeper fish. At this point in time any keeper was crucial as he only had two with 30 minutes left to fish. Ten minutes went by and then he caught another, this time however, it was a five pounder.

The very next cast he fired his crankbait down the bank and caught another solid keeper. Omori was shaking, he had gone from a major disappointment to a legitimate shot at the classic and he could barely contain his excitement. He started to fish some more, but after looking at his watch he thought better of it and decided to head to weigh in. In the back of his mind he worried about only one angler; day two leader Rojas.

The weigh in was just a formality as Takahiro had easily surpassed all of his closest pursuers. The only angler left to weigh in was Rojas and before he even reached the stage he had all but conceded the win to Omori. Rojas weighed in at just 9lbs 1oz giving Omori the classic victory. As Omori hoisted the trophy above his head he let out a huge scream; a scream of happiness and of relief. His journey had paid off. 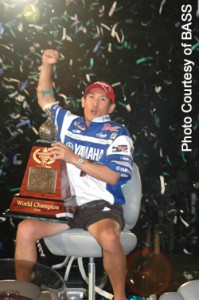 Wrap Up:
The win by Omori opened the door for international bass fishermen to dream of the day they too would be holding up the trophy and crowned Bassmaster Classic Champion.

Omori personifies the American dream. As a teenager he moved to the United States with no money, only one acquaintance, and with very little knowledge of the English language. He had one goal: become a professional bass fisherman. With countless hours of hard work and sacrifice he slowly worked his way up the ranks fishing both FLW and BASS events.

He soon began being mentored by the great Rick Clunn and Omori credits much of his success to the time he spent learning from the legend. He did quite well early on, but without a doubt the 2004 classic would be the biggest tournament of his life.

Before the event he spoke in depth with Clunn about how to prepare for such a huge tournament and got some general pointers. As they talked Omori kept looking at the classic trophy Clunn had on display. Omori asked if he could hold it and before Clunn could even answer Omori had the trophy above his head and was screaming at the top of his lungs as he imagined the feeling of being on stage and hearing his name announced as the classic champion. Omori’s classic win undoubtedly changed his life and changed the landscape of professional bass fishing.

The time will come when another international angler wins a major bass fishing championship, but no one can take away Omori’s title as the first.