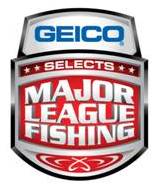 TULSA, Okla. (February 5, 2014) – Major League Fishing will double in size in 2014 by adding two events and 24 new anglers. The new events will be sponsored by GEICO.

Called the GEICO Selects, the events will be filmed this year and televised early in 2015 by Outdoor Channel, America’s Leader in Outdoor TV. Prior to their television run, the two events – the Summit Select and the Challenge Select – will be aired as extended-coverage, web-based broadcasts.

“Major League Fishing has been successful beyond our most hopeful expectations. In fact, I’ve never seen a sports property gain the kind of momentum that Major League Fishing earned in such a short period of time. Our ratings, sponsor support and fan reaction are off the charts,” Wilburn said.

“As a result, Outdoor Channel and the existing Major League Fishing anglers believe that it is time to expand our reach and our brand,” Wilburn said. “So we’re taking the next logical step, which is to bring in additional quality anglers and produce more events. And we have a terrific partner in GEICO, who understands what we’re doing and wants to be part of our growth,”

GEICO Vice President of Marketing Ted Ward said, “Fishing is one of America’s favorite pastimes, and the sport of angling has grown immensely. We are excited about the possibilities of working with Major League Fishing and promoting the GEICO brand to the vast community of anglers nationwide.”

“The Selects will feature intense competition and stand on their own,” Wilburn said. “But this also means that traditional Major League Fishing events will grow from 24 anglers to 30.”

Though the Selects will be televised as early as January 2015, fans will be able to see the competition as early as October 2014, when the series becomes available via Extended Cast, a two-hours-plus, web-based version of the show.

“We believe that we always need to make sure we keep Major League Fishing moving forward, and we think the Selects will be great for both Major League Fishing and the fishing industry as a whole,” Klein said.  “I can’t wait to see what happens, and I’m also looking forward to bringing six more anglers into our field.”

About Major League Fishing
Major League Fishing is a partnership of 24 of the world’s most talented, influential professional bass anglers and Outdoor Channel. Jack Link’s is the organization’s title sponsor. For more information, visit www.majorleaguefishing.com.

About Outdoor Channel
Taking viewers across America and around the world on unparalleled adventures since 1993, Outdoor Channel is America’s Leader In Outdoor TV. Dedicated to the outdoor lifestyle and conservation, the independent cable network is a division of Kroenke Sports & Entertainment, LLC and provides a complete spectrum of riveting hunting, fishing, shooting and adventure entertainment. Outdoor Channel is received by 39.1 million U.S. households – the largest outdoor TV footprint in the country – and is available in more than 50 countries internationally. Outdoor Channel can be viewed in HD and is accessible by broadband and mobile platforms. For program times and other information, visit www.outdoorchannel.com. Follow us on Twitter and on Facebook, and download our iPhone and iPad app.