Video – Livingston Lures Fish with a Pro Day on Oneida 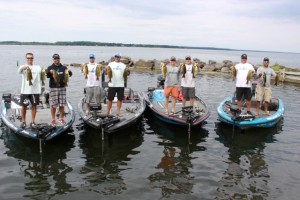 The winners, Jamieson Heaney, Brandon Pedigo, Kris Dew and Brent Malone teamed up with their pro partners for a fun day of friendly competition on the water with Brent Chapman, Hank Cherry, Jeff Kriet and Randy Howell.

The competition was stiff, and in the end, the final results were:

The day was a lot of fun, with tougher than usual conditions for Oneida Lake, but the anglers – being the pros they are – figured something out and put it together for their teams.  One of the anglers, Kris Dew, caught his first ever smallmouth bass, and Jamieson Heaney caught his personal best smallmouth while on the water today.

But, let’s listen to them explain their days in their own words.