Each year the Bassmaster Classic makes a champion out of the angler who best competes against the other 52 in the field.  In most instances, the winner is someone who experiences a life changing event the moment the trophy is hoisted overhead.

For those who are first time winners, the crush of media, the appearances and the fans begins immediately.  The winner almost doesn’t have a chance to think about what he has accomplished until days later, when the instant demands have slowed down some.  That is when Advanced Angler likes to talk to them, to get the details of their winning program.

As we have here, with Cliff Pace, the Petal, Miss. pro who just last week became the 2013 Bassmaster Classic Champion.

Before we get into the event details, let’s examine Pace’s performance in B.A.S.S. events as a whole, and the Bassmaster Classic.  In his history on 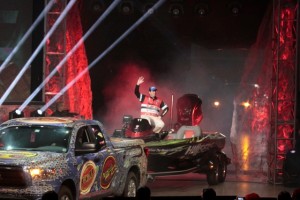 tour, Pace has already built a reputation as a steady angler with flashes of brilliance. In 90 Bassmaster entries, Pace has cashed checks in 66 of them.  He won two Bassmaster opens; one in 2003 and another in 2004 when he was 23 and 24 years old, and prior to last week, Pace had amassed $766,970 in winnings, an average of nearly $8618 per event fished.

2013 marked his fifth trip to the Bassmaster Classic and in those he has finished in the top 15 four times.  His highest finish in the Classic, before last week was a second place in 2008 at Lake Hartwell.  There were many anglers and pundits alike who were saying aloud that it would just be a matter of time before he pulled off a big win.

Pre-Practice
Pace said that he spent two days at the lake before it went off limits to the anglers.  He said that he had enough time on the lake in the past that he didn’t feel like he needed too much time, but just a chance to look for areas that might help during the event.

“I really wanted to just ride the lake and start looking for ditches, drains and channel swing banks that I thought could be in play in February,” he said.  “I wanted to have some things to 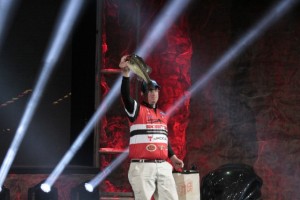 start looking at when I came back for the official practice period, so that I wouldn’t waste time just looking.”

After leaving the lake, he said he started thinking about what types of patterns might play on the lake, and he settled on the facts that a jerkbait would likely come into play, as well as a jig.  “I always like to have two separate types of things going, and these two seemed the most likely to play,” he said.

Practice
Once he arrived at Grand Lake for the official practice, Pace visited some of those areas that he had identified from his pre-practice scouting; but he found little success.  “I really thought the fish would be in more of a winter mode, and in 40 to 50 feet of water,” he said.  “I saw nothing out there that showed any fish activity, and with only little fish in the backs of the creeks and pockets, I knew they were in between.”

He soon discovered that the larger females were holding off of the first structural element on the edge of the creeks and pockets.  Whether it was a rockpile, brushpile or channel bend, the larger bass were positioned there.  He also concluded that the jig and the jerkbait were certainly the keys to catching them.  However, with the colder conditions of the morning, the bass held tighter to the bottom, and they would rise in the afternoon with the warmer conditions.  He knew he would start with the jig, then turn to the jerkbaits in the afternoon.

Just to make sure he wasn’t overlooking anything, Pace spent Wednesday’s final official practice day fishing in the backs of the coves and pockets to see if he hadn’t overlooked anything.  With nothing new to plan for, his game plan was set.

He had picked five or six stretches of banks with spawning pockets on them that had him moving from Shangri-La, to the dam.  He had morning banks that were protected from the winds where he would throw his jig, then banks on the other side of the lake, where he would alternate between two jerkbaits, 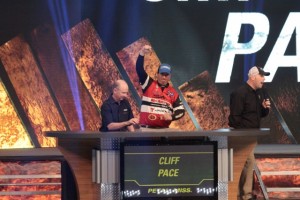 Day One
The first day of the 2013 Bassmaster Classic would  be what he called his easiest day.  He had a solid limit in the morning by tossing his jig on what he termed “fairly steep banks, with 60 to 80-degree slopes to them.”  he said he was forced to slow way down to make sure that his jig stayed in contact with the bottom.   His early limit included a five pounder, as well as a solid four pounder.

He picked up his Jackall Squad Minnow jerkbait in the afternoon, and was able to cull out his smaller fish for higher quality ones, and he left the lake having caught as many as a dozen keepers, and went to the BOK Center with a 21-pound, 8-ounce limit that found him in a tie for first place with Mike Iaconelli.

Day Two
He reported fishing day two in a replica of his plan from day one, but said that his results were not as good.   His morning with the jig produced three keepers before he felt like he needed to move to his jerkbait pattern in the afternoon.

He reported that his jerkbait bite was slower as well, due to the fact that the conditioned slicked off so much on the second day after the front.  “The wind was a lot lighter, although there was still enough to keep it going,” he said.  “But, I still had to slow it down and pause the bait a lot more.”

He reported getting only four bites in the afternoon, but one of them was a 7-pound-two ounce lunker, the second largest bass of the event.  He ended the day with the largest limit of the 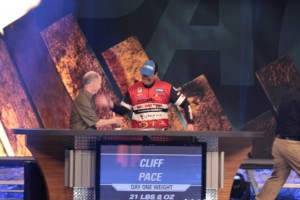 tournament, a 21-pound, 12-ounce day that pushed his two-day weight to 43 pounds, 4 ounces, giving him a seven pound lead over Brandon Palaniuk in second place.

Day Three
With such a large lead, Pace said he knew that the other anglers were really going to have to catch big sacks to chase him down, but that he still wanted to go out and put it away.  That however was not going to be an easy task.

“Everything slowed down that day,” he said.  “I really struggled to get bites on the jig in the morning, and when I went to my jerkbait pattern in the afternoon, the conditions had changed and the wind was blowing away from the target areas, instead of into them.”

With the morning producing only two keepers, he tried the jerkbait bite in the afternoon, but failed to get a bite on the plug.  “I went back to the jig, and it took me a while, but I got three more bites,” he said. “I put two in the boat, and came to the scales with four fish.”

A few anxious moments ensued at the weigh-in, however, when he came to the scales needing just over eight pounds to take the win, he knew he would be okay.  His four fish weighed 11 pounds, 12 ounces and he claimed the title with a total weight of 54 pounds, 8 ounces. 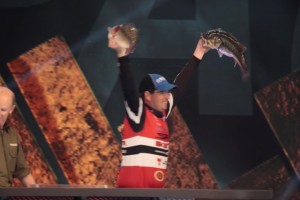 Techniques and Equipment
His jig was a 1/2-ounce V&M Football Jig tipped with a V&M twin tailed grub for a trailer.  He said that he used both in a green pumpkin color, but that he dipped the tails of his grub in orange Spike It dye.  he threw the jig on a 7’2″ heavy action Shimano Crucial Worm and Jig Rod, which he matched with a 6.5:1 gear ratio Shimano Chronarch 200 E6.  He spooled the reel with 12-pound-test hi Seas 100% Fluorocarbon line.

He used two Jackall jerkbaits, the Squad minnow and the Soul Shad; both in Threadfin Shad color.  He threw them both on a 7′ medium-heavy Shimano Crucial crankbait rod matched with a 5.5:1 Chronarch 200E5 and 8-pound-test Hi Seas 100% Fluorocarbon line.

He said it was important to use the slower reel to help slow down the jerkbait retrieve; which he described as just subtly “bumping” the bait, as opposed to jerking it. He also said there were times he was pausing his jerkbaits for between 12 and 15 seconds; which “felt like an eternity” at times.

He reported working all day, each day, to reach his final weigh for the day.  “Each day, it took me until 2:00 in the afternoon to finish my catches for the day,” he said.

Hindsight
Pace is known as a staunch competitor, and one that will analyze each event – even those he performs well in.  “I can find something that I can improve upon in every day of fishing,” he said.  “In hindsight, I should have not spent so much time on day three trying to force the jerkbait bite.  I had caught so many good fish on it, that I really wanted to get it going despite the 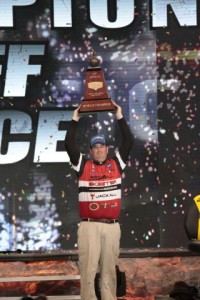 wrong conditions.   Had I turned to the jig earlier, I might have had a bigger limit earlier in the day.”

He said eight of the fish he weighed in came on the jig, and six of them; including his biggest fish, came on the jerkbaits.

Being the Champion
Now that he has had time to allow the reality of being the 2013 Bassmaster Classic Champion to settle in, Pace said that he has had the time to realize that he has accomplished a goal he has had since he decided he wanted to fish for a living.  “The feeling is indescribable now, but at the moment it was different,” he said.  “The lack of sleep and all of the travelling to the lake and weigh-ins each day was so much, that I was emotionally and physically spent

“I felt such a sense of relief for having won that I was kind of lost there for a little while,” he said. “I know that some people didn’t see as much emotion as they would have wanted from me after I won, but inside I was jumping up and down like a two-year-old.

“I know that I have the responsibility to be an ambassador for our sport now, and I take that seriously.  I’m used to a certain amount of media attention, so the volume of it now is a bit overwhelming, but I will learn as I go, and try to do a good job,” he said.  “I want to be able to juggle those duties as the Classic Champion and still progress as Cliff Pace the angler.  Being qualified for the Classic is nice, but I still want to perform well this year, as well as learn to be the champion myself and everybody wants me to be.”