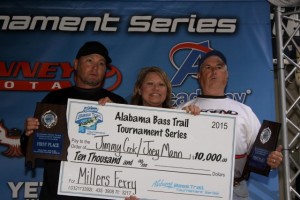 Camden, Ala. – April 25, 2015 – While the city of Camden, Ala. welcomed the teams of the Alabama Bass Trail Southern Division to town with a sincerest form of southern hospitality. While the townspeople were more than hospitable, the conditions Mother Nature welcomed them with were quite the opposite.

However, despite strong thunderstorms and tornado watch alerts that lasted throughout the morning, the anglers showed how resilient they could be. The Millers Ferry pool of the Alabama River has a reputation for being the best fishery in the area showed its true potential, as local anglers Jimmy Cook and Joey Mann led a trio of anglers that eclipsed the 19-pound mark en route to winning the third stop on the Southern Division schedule. Their 19.84-pound limit was the best of the day.

Cook and Mann reported starting early close to the Roland Cooper State Park takeoff, catching an early limit of spotted bass and then running nearly 70 miles towards the historic town of Selma to cull out their limit with largemouth. “We had a quality limit early, but knew we needed more in order to have a chance to win,” they reported. “We left here around 7:00 and ran up to just about Selma to cull them out for largemouth.”

The strategy worked. The pair of anglers found willing largemouth in current facing gator grass in cuts and backwaters off the river and used heavy tactics to pull them out. “We used one-ounce and ounce and a quarter weights and a black and blue NetBait Paca Punch to catch our fish,” they reported. “We caught fish all day, but really made our last cull at around 11:00; we just hoped it would be enough.” They earned $10,000 for their efforts.

Finishing a close second, was the team of Kevin Dees and Jim Smith; who produced 19.20 pounds. The pair said that they felt like things were going their way when the quality fish that bit came into the boat. “We finished in seventh place at this event last year, and we lost a couple of big ones that cost us,” they said. “This year, those same type of fish came into the boat, and we thought we had a chance.”

They reported catching fish on white spinnerbaits and a pair of white swim jigs, one by Catch 5 Lures and a handmade version. “We stayed close, within 12 miles of here and made a milk run of spots until we connected with the right ones,” they said. “We started out by just putting the trolling motor down and fishing, and just bounced around the area; we didn’t catch but eight or ten fish; but they were the right ones.” Dees and Smith claimed the $5,000 prize for second place.

Finishing in third with 19.14 pounds was the team of Kyle Mabrey and Allen Yarborough; the pair earned $4,000 for their efforts. The team of Mike and Dewy McDaniel finished in 11th place with 14.90 pounds, and their catch included a 6.49-pound largemouth that earned the Diet Mountain Dew Big Bass bonus of $500.

The top 10 in the standings were as follows below. For complete standings visit the results page at http://www.alabamabasstrail.org/tournament-series/ar-results/