In a tournament dominated by clean, clear water, light line, spinning reels and smallmouth, Greg Hackney’s boat looks more like he’s been hanging out in a backwater of the St. Lawrence with Swamp Thing.

While Swamp Thing is only just a fictional comic book character, Hackney truly is hanging around in shallow, pond scum laden backwaters, and it’s resulted in back-to-back 18 pound limits thus far, and an 11th place standing near the top of the leaderboard at the Evan Williams Bourbon Bassmaster Elite Series tournament on the St. Lawrence River.

Known for often going against the grain and doing things his own way throughout his illustrious career, this week is no exception – and it’s working once again. “I started looking for smallmouth on the first day of practice like everybody else, but that wasn’t working for me, so I went looking for shallow largemouth, and I’ve found them,” grins Hackney.

The dried up algae and other forms of aquatic vegetation seen all over his boat’s front deck resulted from a furious onslaught of topwater frog bites. 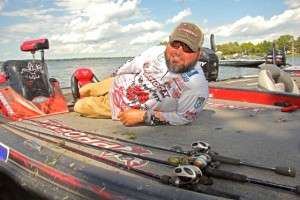 “I’m using a Quantum EXO 200 with a really big spool so I can make long casts with a frog and 65-pound Gamma braid – I’m talking like 50 yard long casts – and when they bite I have to reel them through 50-yards of scum,” says an animated Hackney. “By the time they get to the boat, they’re just covered in pounds of scum and vegetation, but the good thing is once all that scum gets over their eyes and fins they hardly fight – so I just winch ‘em in,” explains the reigning Toyota Bassmaster Angler of the Year.

“I’m getting around 50 bites a day, and to be honest with you, once I got dialed-in on the largemouth, I was real confident I was gonna get a ton of bites,” admits Hackney. “The only thing that could make this more fun is if each bass I’m catching was bigger.”

“I’m having fun though, it’s just shallow nasty fishing – just the way I like it,” says Hackney.

Swamp Thing was known for living in all forms of aquatic vegetation and fighting to protect his swamp home – based on the looks of Hackney’s boat, he and Swamp Thing would get along just fine.