8/4/2011 – There may be no more exciting way to catch bass than Flippin’ and Pitchin’. The technique developed by Dee Thomas in the 1970’s has been responsible for multitudes of bass caught, and more tournament wins than can be counted.
One of the anglers who built a career based on the technique is also responsible for grabbing the mantel of Thomas and further exposing the exploits of Flipping is Denny Brauer of Camdenton, Mo. 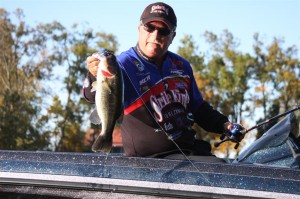 Brauer is a 33-year veteran of professional bass fishing who has built a career based on close contact battle with bass in heavy cover. His career includes a Bassmaster Classic championship a Bassmaster Angler of the Year title, 17 career wins and nearly $2.6 million in career earnings.

Like any dyed in the wool flipper, Brauer has an affinity for lures with heavy hooks and the type of design that allows him to probe the heaviest cover, and pull out the biggest bass in the pond. Flippin’ requires specialized gear, and the lures that can handle the task of giant bites, heavy line and monstrous hooksets.

In the pursuit of the perfect Flippin’ jig, Brauer worked closely with Strike King to perfect his signature Premier Pro Model Jig. “The perfect Flippin’ jig has to have quality components, and it has to have a design that allows the jig to function properly,” said Brauer. “There are two important factors to consider in jig design, and those are how the lure falls, and how it responds to the hookset once it’s been bit.”

With that in mind, Brauer sought to produce a jig that would have the same attitude on the fall, no matter the size. “Most of my strikes occur on the initial fall while Flippin’ and a lure that glides too much is not a good thing,” he said. “We worked to make sure that the Premier Pro Model jig falls identically from 1/4-ounce all the way to the 3/4 -ounce sizes.”

While making sure the Premier Pro Model Jig fell in a vertical fashion in order to trigger strikes, the design also had to insure that the hook would penetrate with near perfection. “Flipping a jig is sometimes a go for broke kind of technique,” said Brauer. “Missing a fish on a hookset, or soon after because of inferior jig design is something I couldn’t tolerate.”

His answer was to develop a smooth bottom on the Premier Pro Model, without sacrificing the addition of a quality rattle. “A good rattle on a jig can really help draw strikes,” said Brauer. “But, if the shape of the jig is not correct, it can also impede the hookset of the jig.” 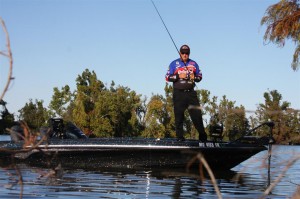 On many jigs, the rattle is a component that is glued on after the casting process is complete; not the case with the Denny Brauer Premier Pro Model Jig. “The shape of the head, the skirt band and the rattle create a smooth surface to allow the jig to move on the hookset without deflecting in the fishes’ mouth.”

Brauer believes that the design of the jig, combined with the cross eyed Mustad Ultra Point hook give the jig optimal hooksetting capability. “This jig is usually buried in the roof of the mouth, or at the bony portion of the area between the eyes,” he said. “It is exactly the position I want the hook to be in when fighting the fish through the heavy cover we target when flipping.”

Brauer’s Gear
Brauer allows the type of cover he is fishing to define his rod choice. Like any pro with his stature should, he has rods that he relies on. “There are three models I use, and it depends on the cover I am fishing,” he said. “Most of the time, I am using my “all around Flippin’ Stick, for heavy cover or punching, I use my extra heavy version and if I am flipping or pitching sparse cover or boat docks, I use a lighter, flip and pitch version.”

His reel choice is also simple; he uses an Ardent F700 Flip and Pitch reel he designed for the company. “I don’t have to worry about the drag or backlash as much when I’m using the F700,” said Brauer. “The Permalock drag and lack of a pawl gear help me to present the lure properly, and have the right amount of power to pull them out.”

The Right Jig
The Strike King Premier Pro Model Jig comes in four sizes, and while they all their applications, Brauer fishes with two sizes most of the time. “I use the 3/8 and 1/2-ounce models most of the time, and I base it mainly on the water temperature and time of year,” Brauer related. “When the water is cold in the prespawn period I tend to use the 3/8-ounce, but as it warms and the fish move into the postspawn period, I lean towards the ½-ounce variety.”

The reason for the size choice is because of fish activity levels, when the fish are sluggish in the cold water periods, a slower falling jig will often generate strikes. However, when they become a little more aggressive, increasing the speed of the fall with a 1/2-ounce jig keeps the fish from getting too good a look at the jig, and triggers reaction strikes.

The extreme sizes, 1/4-ounce and 3/4-ounce versions see their moments, but they are very specific in their applications. “I use the smallest size in extremely cold water,” said Brauer. “I will go up to 3/4-ounce when I want the bulky profile of a jig, and I am punching milfoil, sparse hydrilla beds or matted reeds.” 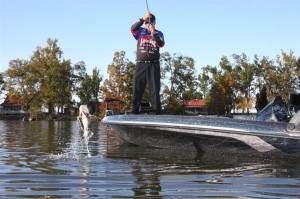 Along with the size choice, water temperature dictates choice of trailers as well. In cold water, the former Bassmaster Classic Champion uses his signature Strike King 3X Plastics Denny Brauer Chunk, then opts for a Rage Chunk as the water warms. “The fish don’t seem to want a lot of action early in the year, but the do as the water warms,” he said. “Again, I use the spawn as my benchmark for choosing the trailer type.”

One exception to his choice of trailers is in waters that hold giant bass. Places like Falcon Lake or Clear Lake may require larger than normal profiles to get winning bites. “In cold water, I upsize my Denny Brauer Chunk to the Magnum size, and if I want the Rage type action in warming water, I’ll go with a Rage Lobster that I’ve trimmed some length off of.”

Brauer is quick to remind anglers that his Denny Brauer Chunks are made from Super Plastic, so they need to be stored in the bags they come in, or in a box that is separated from standard plastisol products.

Colors
Brauer is known for his use of a black and blue jig, and while it may seem that the reason is that he is partial to the color combination; the reason is more pragmatic. “Black and blue is at its best in slightly stained water; water you can see only to about three feet in,” he said. “If you think about it, that’s the water you find in the majority of the country.”

If the water is muddy, Brauer opts for a Texas Craw color with a black and blue trailer, then as water clears in the summer time with the increased presence of grass, he uses a Texas Craw with a green pumpkin trailer. In ultra clear water, he uses primarily a green pumpkin jig and trailer combination.
One of his oddball colors is to flip a white jig in the fall; he said that sometimes when the bass are heavily targeting shad, he can get more bites on the shad imitating color.

With all of that said, he has one main box that contains his most often used sizes and his two main colors; black and blue and Texas Craw. “I live out of that box most of the time, but carry an auxiliary box that has all of those other combinations, just in case.”

An Oddball Presentation
Strike King’s Tour Grade Football Jig has become a mainstay for deep water anglers, Brauer said his Premier Pro Model has become a sleeper deep water jig for him when others are using football jigs. “I can throw this on 15-pound-test fluorocarbon line and really do some damage in deep water,” said Brauer. “I like the fact that it has a rattle, and the Mustad hook really does a great job in deep water.”