Bass on the Boil with Mark Menendez

8/2/2011 – Bass boil; they push bait to the surface and create a rippling, frothing churn on the surface of the water. Anglers dream of the moment that a school of five pounders rises to the surface in a boil, and topwaters or fast moving baits produce 20 pound limits in minutes.

In the summertime, bass boil – but it ain’t necessarily always a good thing. 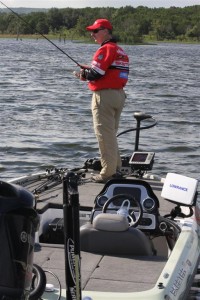 While the angler may be looking for which layer of clothes he can peel off; rest assured, bass can still be caught. However, you must have an understanding of why fish respond to hot water like they do, and what moves they make when surface temps feel like bath water.

Mark Menendez, the Bassmaster Elite Series pro from Paducah Kent. is an accomplished angler. His B.A.S.S career features three wins and nearly $900,000 in career earnings. However, Menendez also has a degree in Fisheries Biology from Murray State University, so he applies his scientific mind to what the fish are doing when the water boils.

“Even though summertime can be the second most difficult fishing period, bass have very predictable needs,” said Menendez. “They respond to their need for dissolved oxygen and forage. Those are needs that cannot be avoided, so if you look for those variables, bass become easier to locate.”

Dissolved Oxygen and Food
Every creature needs oxygen to survive, be it through the air, or in the case of the bass, through the water. Menendez said that there is a level that bass must have at a bare minimum to survive. “They must have three parts per million at a bare minimum,” Menendez said. “They’re by no means comfortable at the level, but they can survive. Knowing that they need oxygen levels can help you pick the water column they’ll be living in.”

Menendez said that everything in nature is at its peak in the summertime. “The entire Ecosystem is running at full speed,” he said. “Everything, from oxygen to nutrition is being consumed from the bottom up, so keeping that in mind can help you in your fishing as well.”

Kentucky Lake Petri Dish
Menendez’ home lake is the TVA reservoir, Kentucky Lake. While he has experienced high temperatures at bodies of water across the country, he does most of his observing on Kentucky Lake. “This lake has two very distinct areas in the summertime that are productive,” said Menendez. “The outside ledges can be very productive to a certain depth, and then there are the shallow fish that can produce as well.”

Because of the power generation that occurs on Kentucky Lake, and lakes like it. The inhabitable portions of the lake become very tight. “Where we might catch fish on deep outside ledges in the postspawn and into the early summer, they can’t live as deep when the water gets really hot.”

Menendez said that bass on these types of lakes tend to relate loosely to the shallower ledges, but they tend to suspend more. “This is when I pull out a shallower crankbait, like a Strike King 5XD or a 3/4 to 1-ounce Bottom Dweller Spinnerbait and slow roll it,” he said. “I use a 5.4:1 Lew’s Tournament Pro on a 7’ medium heavy Power Tackle graphite casting rod to keep the bait in the strike zone as long as possible.”

However, chasing suspended bass is no particularly easy venture. For some anglers, targeting shallow cover is a better choice. Menendez believes that as much as 20-percent of a lake’s bass population live shallow year-round, but in the summertime, that number may be a little higher. 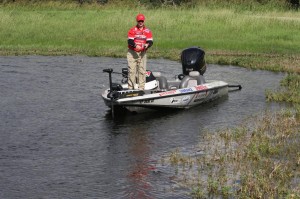 “I’ve found that the oxygen contents tend to be higher in the shallow water, so bass tend to be a little more comfortable,” said Menendez. “They also have some cover to relate to, so they can be easier to catch.”

Summertime Phenomenon
He said that there is one time that he absolutely commits to fishing the shallow group of bass on his home lake. “When we get one of those snaps where we get overnight lows in the 60’s, the shallows light up,” said Menendez. “Shad are always looking for cooler water, and when those cool snaps come, they all run into spring fed creeks for a touch of cooler water. The bass chase them, and join with the 20-percent resident bass; and those pockets can be magical.”

Some of his favorite ways to fool these groups of fish is to use a light, 1/4 to 5/16 Tour Grade Tungsten sinker on a big 10-inch Strike King Anaconda worm covered in BioEdge scent. His feeling is that the slow fall and big action of the tail create strikes. He also likes to throw a KVD 1.5 squarebill crankbait around cover, but sort of pause and twitch the bait near cover to try to create reaction strikes.

Other Bodies of Water
Menendez suggests that anglers look at the type of waterway they are planning to fish when they are trying to consider their planning. “Basically, the dirtier the water, the shallower the bass will be,” Menendez reported. “The clearer the water, the deeper they’ll be.”

On deep, clear reservoirs, where sunlight penetration is at a maximum, the oxygen content is deeper as well. “Some of those lakes, like in the Midwest and in the west, the bass can be way offshore,” he said. “These are areas where deep jigs, vertical spooning or even drop shotting can be tremendous.”
Natural Lakes tend to follow more consistently with the shallow water areas of his home lake because weed growth will create oxygen and force the fish shallow.

Rivers tend to be shallow fisheries as well, for several reasons. First, the turbidity of the water from the current creates silt and chokes out deeper oxygen. Secondly, the constant flow of a river tends to keep every fish; from forage or gamefish population shallow. “There are more places to find rest and ambush spots near the bank than out deep,” Menendez said. “Plus, when the majority of the baitfish live in shallow water to avoid being swept away; it doesn’t take long for bass to figure out where the buffet is.” 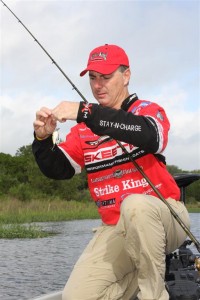 Tips for Catching Summertime Bass
Menendez urged anglers to think slow and erratic in the summertime. “They may need to eat because their metabolism is so high, but they are by no means comfortable,” he said. “Using a slower, stop and go retrieve with twitches of the rod tip will make a crankbait dance a spinnerbait pulse enticingly,” said Menendez. “You also may have to yo-yo your jigs and plastic worms, but bass will react, and you can take advantage of them with a little bit of proper planning.”