Dynamic – Toledo Bend is On Fire

Toledo Bend is ablaze with big fat bass – and many are still on spawning beds. Just ask Darold Gleason. The 32-year-old Bassmaster Central Open competitor is a full time guide on the 80-mile long reservoir that straddles the Texas-Louisiana border, and he’s caught three largemouth over 10-pounds in the past six months from the monstrous 186,000 acre impoundment.

Safe to say, the Evan Williams Bourbon Bassmaster Elite on Toledo Bend is shaping up to be a big bass beat down when the best pros in the world begin competing Thursday.

Why is it So Good?

“The drought and low water levels of 2006 and 2011 actually lead to a lot of vegetation and bushes growing around the shoreline, and when water levels returned to normal all that new growth served as an awesome flooded sanctuary for all the fingerlings that hatched,” says Gleason.

If you’re a bass, the abundance of shallow water nursery habitat on Toledo Bend creates a great place to grow-up, but an adult life spent further off-shore among acres of hydrilla makes for an awesome neighborhood to grow old and big in.

Add an abundance of groceries to the vegetation in the form of shad, crawfish and bluegills and life gets rich quickly for a largemouth living in “The Bend.”

How Good, and How Big?
“I don’t think it’s a stretch at all to say we could see the Elites bring six to eight bass a day to the scales that will weigh over 7-pounds,” says Gleason. “And over the course of the 4-day tournament, I’m guessing we will see three or four bass over 10-pounds weighed-in.” 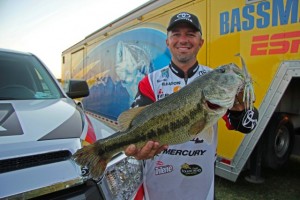 Uniquely cool to Toledo Bend is the existence of a great conservation-minded effort called the Toledo Bend Lunker Bass program. Anglers who catch a bass 10-pounds or greater, have it weighed and photographed at a designated certified scale in the area. The trophy catch is then tagged and released alive, and participating anglers are later presented with a free fiberglass replica as the Toledo Bend Lake Association’s way of saying thanks to visiting anglers for releasing giant bass back into their waters.

In 2013, 58 bass over 10-pounds were released as part of the program. That was a record, and 2014 is statistically on course to eclipse the goodness of last year.

As far as daily tournament weights, Gleason says it’s taking 25 to 28 pounds per day to win a team event on the reservoir in recent weeks.

What phase of the spawn are they in?
There were four snow events this winter in the region. Old timers still can’t believe it, and Toledo’s largemouth are still in a bit of disbelief too, causing the spawn to be prolonged much later on the calendar. Many late bloomers are still on beds.

Fish that live in the northern end of the reservoir in places like San Patricio Creek are pretty much done spawning, but travel south 40 or 50 miles on the huge reservoir, and there are plenty of bass on beds in places like Indian Creek.

How will it be won?

“It’s bass fishing, and these guys are the best in the world, so there’s always an element of surprise and unpredictability, but I’m guessing it will be won by catching post-spawners in the morning that are gorging on spawning shad, complimented by catching big ‘kicker’ fish off the beds as the day progresses,” says Gleason. Spinnerbaits, swimbaits and jerkbaits should play huge around the shad spawn, but Gleason can’t overemphasize the importance of big bass still on beds playing a huge role this week.

“The cool thing about this lake is that just about every guy in the tournament will have a chance to win by fishing the way he loves to fish most,” says Gleason. “There are several different patterns capable of producing a win for these guys.”

How much will it take to win?
“We’re throwing darts here, but because the weather is going to be sunny with fairly calm winds, these guys should have the chance to catch a lot of big bass off beds – and if that happens I’m guessing it’ll take 85-90 pounds to win,” says Gleason.

Gleason is certainly in the ballpark. Brent Chapman won with 83-pounds the last time the Elite pros competed on The Bend, and every indication is that weights should be awesome this week. Things are red-hot good here in a region rich with big bass, piney woods and crawfish — on fire in fact.