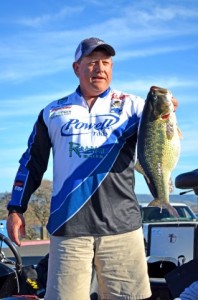 Novato, Calif. (July 8, 2014) – Keith Bryan, president of Powell Rods, a Novato, Calif. based premium fishing rod manufacturer received notice today from the IGFA that his February 22, 2014 catch of a 10.48-pound spotted bass from New Melones Reservoir has been declared the new All Tackle World Record, and eight-pound-test Line Class Record for the species.

Bryan was competing in a two-day, California Tournament Trail (CTT) Pro-Am event; an event that he eventually won, the record catch occurred on the first day of the event.

“I am speechless at this moment,” said Bryan. “I already felt like I had lived a dream by winning a Pro-Am event that day, but to have that fish be declared a world record is something I would have never dreamed of being a part of.”

“I am so proud and humbled at the same time by this notification and I am absolutely beside myself with joy,” Bryan exclaimed. “I think it is a great thing for the entire Northern California fishing community and for California as a whole that the world record was once again broken in our state; I’m just felling so blessed that I get to be a part of it.”

Bryan remains realistic about how long his record will stand. “As great a spotted bass fishery as the state of California has become, I’m certain that this record will fall again soon,” he said. “But, to have held this record for even one day is a dream, and an accomplishment that any angler should be proud of; it is something that I can say for the rest of my life, that I caught a World Record spotted bass. This has truly been a dream come true.”

Powell Rods is a 103 year-old company with its roots in fly fishing. In 2005, Powell introduced their Max Series of fishing rods featuring proprietary high modulus graphite Maxumfiber blank material coupled with the world’s highest quality rod building components. In 2011, Powell followed with the Endurance Series; built on an enhanced version of their proprietary Maxumfiber blank material and teamed with premium components. They then included the Diesel lineup in 2012, which added a value priced line of rods to the brand. In 2013 the company introduced two new lines, the high end TiMax along with the Inferno lineup a mid range performance based line.

Each Powell rod is the product of many years of rod building experience and the expertise of our design team that couples engineering and angler input; the result is a rod that of exceptional quality and high performance demanded by anglers. The Powell focus is to provide products with the highest quality standards, backed with superior customer service. Try one and see why a Powell bass rod is the best performance and value on the planet