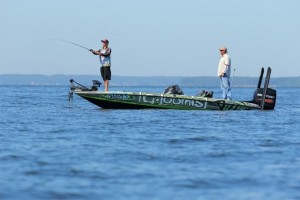 One thing we know to be true about bass is that they will strike at something out of curiosity.  Show a bass something completely different or new, and you’re liable to get a strike. It may often be often a tentative nibble as opposed to a violent, aggression response, but, a bite is nonetheless a bite.

Bassmaster Elite Series pro Jonathon VanDam from Kalamazoo, Mich., is one angler who knows that giving a different look to a school of fish can greatly enhance his chances of producing quality strikes. He uses that knowledge when fishing summertime tournaments that usually find groups of anglers targeting specific offshore targets for schools of fish.

The modus operandi for anglers this time of the year is to have a series of lures arranged on the deck of their boats. Those lures usually revolve around a set of crankbaits, a couple football jigs a big worm and perhaps a flutter spoon. Anglers will start with one of the lures and move through their progression looking for strikes. The more anglers rotate through the areas with this type of program, the more bass become conditioned to the lures.

VanDam’s answer is to mix in a different lure that appeals to the bass’ natural feeding receptors and senses. “I really like to include a swimbait, like the 4.5″ and 5.5″ Strike King Shadalicious on a 1/2-ounce Squadron Head,” he said. “There is something about this lure that really draws strikes; whether it is the tail movement, the shape of the overall natural appearance; bass just eat it.”

The ‘Licious Setup
VanDam said that he likes to pair his Shadalicious swimbaits with 1/2-ounce Strike King Squadron Head jigheads to allow him to fish the lure in a variety of ways. He opts for the 4.5-inch size when he is fishing in an area where the baitfish are smaller or the pressure is extremely high. When he is on a lake like Guntersville, Kentucky Lake or another lake with large bass that are frequently caught, he opts for the 5.5-inch version; he almost always uses Blue or Green Gizzard Shad colors.

He selects a GLoomis NRX 894JWR rod for tossing the baits because they have plenty of backbone for setting the hook on long casts, but they have enough tip action to allow the fish to take the lure deep. He pairs that with a 6.3:1 Shimano Curado 200 I reel spooled with 14 to 17-pound-test fluorocarbon, depending on the makeup of the bottom and the size of the fish.

Where to Try It
VanDam said that he looks for certain types of situations where he feels that the Shadalicious is the best way to produce strikes. “I really like it best when bass are up on top of the ledges,” he said. “The next time I really like to throw it is when I can fish it on the outside edge of the grass, and I can target them against that edge.”

He also said that it is best when one other factor is included. “Like any other time on one of the power generating lakes, it is best when they are generating current,” he said. “The increasing of the current really ignites the bite and the fish get aggressive.”

With any of these locations, the most important deciding factor on whether to fish there or not is the presence of baitfish.

How to Fish the Shadalicious
The Kalamazoo pro said that he likes to main retrieves, and a third one when the bite cools. The first retrieve is one that he uses when the fish are holding right on the top edge of the ledge or on the edge of the grass. In this instance, VanDam chooses to slow roll the lure, scraping it along the bottom. On the grass edge, he keeps it parallel to the edge, but makes quartering casts to the ledge and slow rolls it off of the edge. 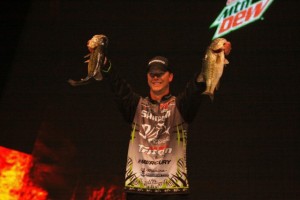 The next approach is used when bass are aggressively feeding, especially on the flat above the ledge or chasing off of the ledge. In this case, VanDam likes to allow the lure to sink to the bottom, then burn the lure for several turns of the reel handle, then kill it and allow it to quickly sink. He said this retrieve is one he often uses in place of a Sexy Spoon.

The final retrieve is used when bass slow down, and the bite cools a bit. Here, he fishes the lure much more like a jig, lifting and hopping the lure in short bursts off the bottom, allowing it to fall back again.

He said the indication of a bite is often something as subtle as losing complete contact with the lure. “Smallmouth will absolutely crush this thing trying to kill it, as will feeding largemouth and spotted bass,” he said. “But, when the bite is tougher with any species, they will often swim up behind it and mouth it and keep moving forward. When this happens, reel up the slack until you feel weight and then set the hook.”

Wrapping Up
The technique has become one of VanDam’s more popular offerings. He said he has used it during many of his high finishes on the Elite Series the past couple of seasons. His top 10 finish at Toledo Bend this year as well as the Bassmaster Classic on Lake Guntersville, as well as a couple of his higher finishes last season.

“I’ve really come to count on this setup,” he said. “it has really become one of my consistent producers all over the country.”