Dynamic Blog Respect by the Pound by Alan McGuckin – Dynamic

Seconds later his thoughts turned to the man he had just outmatched by a mere ounce.

Rojas is a Van Halen fan, but he’s also a fan of Gerald Swindle. “I wish Gerald was still standing here, I’d give him a big ole hug,” said Rojas. Then Swindle, a sportsman to the core, heard the comment and walked back on stage to allow Rojas the chance. The two instantly shared an embrace anchored in respect.

Backstage, Rojas again repeated his compassion for Swindle. “Gerald is a friend,” Rojas said with deep sincerity. “We share Quantum and Oakley as sponsors, so we spend a lot of time together working for the same companies. And losing by an ounce is as tough as it gets,” said Rojas. 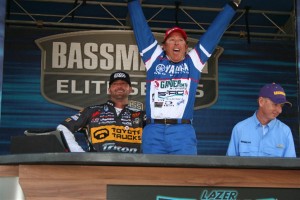 Not far away, Swindle held his head high, and kept life in perspective as his gorgeous wife LeAnn and loyal dog Myrick stood waiting patiently while “The G Man” smiled and signed autographs for dozens of fans that seemed to simply treasure a moment with him.

Minutes earlier Swindle described the details of his outstanding week to the media. “I was primarily fishing a jerkbait on 12-pound Vicious line with a 6.3:1 Quantum Smoke reel and a 7-foot medium action Smoke Rod. I made repeated casts into points with enough of a curved bend in them to catch the wind. If the wind was blowing across or over the point, it wasn’t nearly as good. I’d sit out there and make repeated long casts at those points that the wind was blowing into, and if there was a drop in depth in the wind blown bend of those points — that’s where I’d get bit,” explained Swindle.

“I’m not out here to beat Dean, KVD or anybody else. I fish within myself. It was Dean’s tournament to win,” concluded Swindle.