Skeet’s Beat – Made it Worse

I put an exclamation point on a sucky year at Wheeler.

This had already been one of my toughest years on tour when I had to go a make it even tougher with a bonehead mistake. In case you hadnâ€™t heard; I had to turn myself in after weigh-in on Saturday at Wheeler for finding a sixth fish in my livewell.

After finally getting things on track, and finding what would eventually be the winning fish (I was sharing the water with David Walker, who eventually won), I was in the Elite 12 a friend brought his kid and friend over to say hi. As they were climbing around in my Stratos Elite 210, they looked in the livewell and found a fish.

Their dad asked if it was a shad or a bluegill that one of my fish spit up, and the kid said no; itâ€™s swimming. I said â€œwhat??!!â€ and went to look in the livewell and saw a bass swimming around in there. I couldnâ€™t believe it. I had to go turn myself in, and it cost me my full dayâ€™s weight.

Had I found it before I went to weigh-in, I could have taken all six fish to the scales, and they would have culled my biggest fish; which would have only cost me about six ounces because all of my fish were about the same size.

Bottom line is that I still would have been fishing, and had a chance to have a high finish; get some TV time or even possibly win and make the Classic.
Iâ€™ve played it over in my mind and I still donâ€™t have a clue as to when I lost count; but, I did, and it cost me.

Anyway, I was on the right fish, and I was catching them on a Lucky Craft RC3.5DD in White Shad and a 12-inch plum colored Berkley Power Worm.

I threw the crankbait on my signature Wright & McGill S-Curve 7â€™10â€ Magnum Cranking rod with a Victory 621 reel and 10-pound-test Berkley Trilene 100% Fluorocarbon line and prototype TroKar treble hooks. For the worm I used my 7â€™2â€ Micro Honeycomb Football Jig / Big Worm rod and a Victory 701 reel spooled with 15-pound Trilene 100% Fluorocarbon. I rigged the worm on a jighead for a little different action. 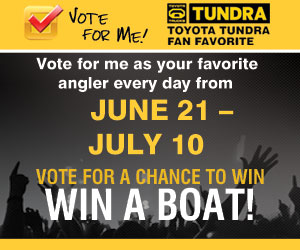 Anyway, on the positive side of things; I found the winning fish and was fishing really well; which was a nice change to end the season; I just wish I could have kept it going.

On another note; I would really like a chance to go to the Toyota Trucks All Star Week in Alabama at the end of July. With B.A.S.S. giving fans a chance to vote four anglers in; Iâ€™m hoping that I get to be one of those four and give Lake Jordan and The Alabama River a run for my money again.

So, if you want to vote for me; or anyone else for that matter, go to http://vote.bassmaster.com and vote every day. I know Iâ€™d appreciate it, and so would some of the other guys.