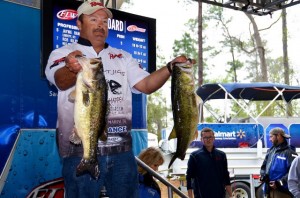 LUFKIN, Texas (March 27, 2014) – Professional angler Rick Cotten of Guntersville, Ala., brought a five-bass limit to the scale Thursday weighing 25 pounds, 15 ounces to take the lead after day one of the Walmart FLW Tour at Sam Rayburn Reservoir presented by Chevy. Cotten now holds a 1-pound, 4-ounce lead over second-place pro Andy Montgomery of Blacksburg, S.C., who brought five bass weighing 24-11 to the scales, heading into day two of the four-day event that features 176 of the world’s best bass-fishing anglers competing for a top cash award of up to $125,000.

“This was a total surprise for me based on my practice,” said Cotten, a third-year pro who has one previous top-10 finish in FLW Tour competition. “I caught a lot of fish in practice but my best five were only going about 16 pounds. These are not the same fish that I was catching in practice. They just randomly moved in.”

Cotten said that he spent the entire day in one area, which he described as a grass line that was a couple of acres long.

“I had several different areas that I was ready to fish, but I didn’t run them today because of the weather,” Cotten said. “So I stayed in one spot and it paid off. Those fish aren’t holding to anything, so who knows if I’ll be able to catch them tomorrow. There is no hard structure there. The fish are just holding to the grass line.

“I’m going back to that same spot tomorrow and plan on camping out all day,” Cotten continued. “I’m working it very thoroughly and fishing very slow. I feel like these are pre-spawn fish.”

Cotten said that he caught seven keepers throughout the entire day, and although he was not ready to divulge his baits of choice he did say that all of his fish came on just two baits.

“I used to live in Houston and I got to fish on this lake quite a bit,” Cotten went on to say. “It’s really fun getting to come back here and I can’t wait to go fishing again tomorrow.”

The top 10 pros after day one at Sam Rayburn Reservoir are:

Chevy pro Jay Yelas of Corvallis, Ore., won the Big Bass Award on the pro side Thursday with a fish weighing 8 pounds, 13 ounces to win $500.

Tim Beale of Hernando, Miss., and Eric Self of Lawndale, N.C., tied for the lead in the co-angler division after each brought five bass to the scale weighing 18 pounds, 4 ounces.

Anglers will take off from Cassels-Boykin County Park located at FM Road 3123 (off State Highway 147) in Zavalla, Texas., at 7 a.m. on Friday and Saturday. On Sunday, the final day of competition, the top 10 anglers will take off at 7:30 a.m. Friday’s weigh-in will be held at Cassels-Boykin County Park beginning at 3 p.m. Saturday and Sunday’s final weigh-ins will be held at the Walmart located at 2500 Daniel McCall Drive in Lufkin beginning at 4 p.m.