Looks vs. Acts with Larry Dahlberg

Sometimes, when you look at a bait in the package it’s tough to tell if it’ll actually catch fish. Some of the best baits ever made don’t look anything like something a bass would eat. For example, look at a jig, when it is in the package it doesn’t look anything like a crawdad, baitfish, frog, bird, snake, lizard, worm or anything else a bass might want to eat. However, when you put that jig in the water and make it act like a crawdad, it is one of the deadliest baits in the boat. That’s the difference in baits that look real vs. baits that act real. 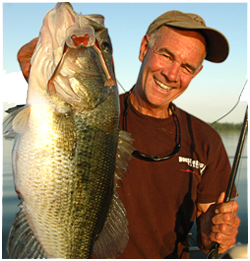 What is a bait designer thinking when they design lures? Larry Dahlberg, the host of television’s Hunt for Big Fish explained, “I’ve been tinkering with baits since I was a little kid and the question people often ask me is, ‘what were you thinking?’ he reason is because a lot of the baits I’ve designed over the years look pretty stupid. I learned long ago it is not what stuff looks like that makes a fish bite,” he said.

“You can prove it to yourself, kill a crayfish, then throw it in the water and try to get a bass to eat it. It won’t touch it. it looks like a real crayfish, because it is one but, it doesn’t act like a crayfish. You can do the same thing with a frog. Catch one kill it and throw it in the water. If it just lays there it is not going to get eaten, maybe a catfish will come along and eat it; but not a bass.”

With technological advances in lure manufacturing over the past decade, artificial baits have become more and more realistic looking in the package. This certainly helps sell baits but, does it help catch fish? Dahlberg went on to explain what he was thinking when he designed his baits; many of them more than 20 years ago, that are now available from River2Sea, “What am I thinking when I design a bait? I am thinking how do I make a crayfish… how do I make a frog… really look like one when it is in motion.”

Take some of the best fish catching baits ever designed and show them to a non-angler and they’d be hard to convince that a fish would eat them. Spinnerbaits are a couple of blades some wire, a big hook and skirt, they certainly don’t look to be very appetizing to a fish while they’re in the package, but in motion they are great fish catchers. Buzz baits, crank baits and many soft plastic lures don’t look like they’d be great fish catchers but, bass anglers around the globe continue to land fish on them trip after trip. All of these baits catch fish because they act real not because they look real. 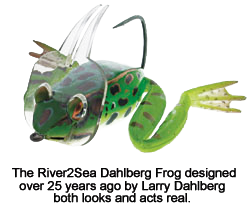 The next step is to understand what movements you want the bait to simulate; Dahlberg explains. “When I was a little kid I used to catch big buckets full of crayfish below the power dams in Minnesota . Then I’d climb up in a tree and throw them in the river. I’d watch the fish react to them. What I found out was when a crawdad was in its defensive ‘kung fu’ position bass would, even in current, back up and move out of the way and let the crayfish go by. But, the minute that crayfish tried to get away, ta-ta-ta-ta-ta, bam! He’d get eaten.” As Dahlberg explained it, it is apparent that simulating the fleeing of a crayfish is more important than simulating the “kung fu” defensive action.

Dahlberg designs his lures with an action first concept, and it is the marriage of his understanding of bait movement, combined with River2Sea’s manufacturing capabilities that create lures that look natural, and catch fish. The latest examples are his Larry Dahlberg Series Clackin’ Crayfish and his Diver Frog.

The same can be said for almost all prey of a bass. Finding the actions that get the bass to attack it can be the difference between lots of fish and no fish. The subtlest movements can be the biggest difference maker. 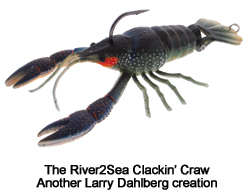 Many swimbait anglers have been witness to this first hand. Almost anyone who has ever thrown a swimbait for any amount of time in relatively clear water has seen a follower. A follower is a bass that follows the swimbait right to the boat but, doesn’t try to eat it. The bass just stalks the bait from just below or just behind, but never really attempts to eat the bait. This can be incredibly frustrating and brings the question, “What made the bass follow it to the boat?” More importantly “why wasn’t it enough to make it eat the bait?”

Most good swimbait anglers have tricks to getting those followers to eat. Many snap the rod and get the bait to do a 180-degree turn and face the bass provoking a strike. Others may pop or give a few really quick cranks to get the bait to jump and speed up as if it was attempting to get away. Knowing how to get that bait to act natural, the way the actual prey would act, is the difference between getting a follower and catching a fish. 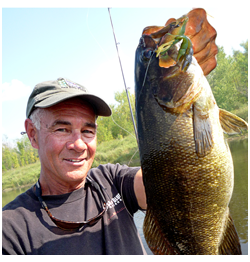 A great example of this in action is from Clear Lake in March of 2010 when Byron Velvick won the Clear Lake Bassmaster Elite Series Golden State Shootout on a swimbait. What Velvick was doing was getting his signature Rago BV 3D Swimbait to hang up on the shallow grass that was growing in his fishing area. When he popped the bait off the grass and allow it to flutter, he’d get bit. The action that Velvick was mimicking was the fleeing of a baitfish from the grass and that was enough to entice the bass to eat the bait and land Velvick a $100,000 payday.

While looking real is great and sells baits to anglers, acting real is what puts fish in the boat. The advanced angler knows what actions to simulate to get bit, find those actions and you’ll catch more fish.