Will it be a ‘spawn fest’? What lures will play a major factor?

What percentage of the bass weighed-in do you think will be ‘spawners’? 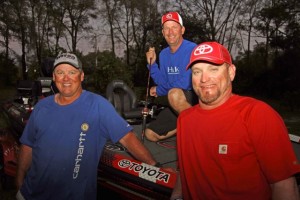 Scroggins: 13 pounds 6 ounces, not in a tournament, about seven or eight years ago.

VanDam: 10 pounds in a B.A.S.S. tournament here a few years ago.

This is Terry “Big Show” Scroggins’ backyard, and he loves to cook for fellow anglers, media, B.A.S.S. staff, and service crew mechanics when the Elite Series visits Palatka – what dish will be the biggest hit this week in Scroggins’ kitchen?

Scroggins: Ribeye, but I’m so busy fishing, my buddy Bill Counts will have to serve as primary chef on that one.

VanDam: Could be Boston butt, shrimp, chicken- but I’ll choose ribeye as the favorite.

Three lures that will get the most use this week?

Your prediction for the daily average weight it will take to win?