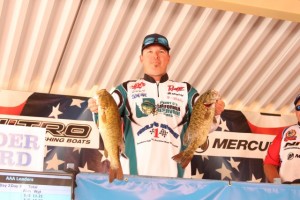 Las Vegas, Nev. – September 14, 2014 – When the day began at the 2015 WON Bass Nitro / Mercury U.S. Open, 168 anglers headed out onto the waters of Lake Mead, the site of all 33 U.S. Opens. Lake Mead’s beautiful sunrise fills anglers with hope as they head towards their first fishing holes, but her brutal and unpredictable conditions can often snuff out that hope as quickly as it grants it.

However, in a bass tournament, someone has to lead, and Riverside, Calif. pro Garrett Howard managed to do things just a little bit better on day one than his competitors. Howard brought a more than respectable 12.13-pound limit to the scales to grab the early lead in the most prestigious bass fishing tournament in the Western United States.

“I made a long run this morning and really found the quality of fish to be a little bit better than I had in practice,” said Howard. “I had seen some really good fish swimming around, but couldn’t get any of them to bite. I think that the wind helped some of those better quality fish bite today.”

He said that his AAA partner; Cher Vang, helped settle the nerves in the boat by putting three small keepers in the boat early. “It was nice to have those fish early to relax us, but we were able to cover a lot of water and cull them out before we made the run to weigh-in. I need the skies to be sunny for things to continue as they are, but I feel pretty good about tomorrow.”

After leading for much of the weigh-in, Glendale, Ariz. pro Kevin Caruso finished the day in second place with 11.21 pounds; he said his day was about patience. “My son and I found a place in practice a long ways from takeoff, but our day didn’t start off as we expected,” he said. “My son left early after catching a couple of small fish, but the fish turned out; I waited them out and had my limit by around 10:00, and didn’t get the afternoon bite I had expected to improve with; we’ll see how it develops tomorrow.

Noted Lake Havasu, Ariz. pro Roy Hawk finished the day in third place with 10.68 pounds, he was followed in fourth by Philip Roesener of Longdale, Nev., who weighed 10.17 pounds, and Guy Savidan of Norco, Calif. rounded out the top five with 10.15 pounds.

On the AAA side, Vang, from Chico, Calif. leads with 12.13 pounds, second place is Mikey Reynolds from Overgaard, Ariz. with 11.21 pounds. The third place AAA angler was David Foreman of Queens Creek, Ariz., who weighed 10.68 pounds. He was followed in fourth place by Mike Taylor of Sonora, Calif. with 10.17 pounds and Raymond, Tak of Los Angeles, Calif. was fifth with 10.15 pounds.

The Pro Big Bass of the day went to Savidan with his 3.85-pound kicker and the AA Big Bass went to Jose Silva of Las Vegas with his 3.47-pounder.

A complete list of Pro and AAA standings can be seen below.

WON Bass regrets the difficulties that led to our inability to broadcast the Costa See What’s Out There Live Weigh-in from day one of the 2015 U.S. Open from Callville Bay.

While setting up for the weigh-in the equipment data connection provided by our Internet Service Provider failed and deapite the best efforts of WON Bass and Z3 Media to entreat the provider to remedy the situation, our needs were not met in time.  We tried other mobile workarounds, which were not effective in the remote location.

WON Bass and Z3 Media are diligently working to remedy the situation and anticipate being able to resume normal broadcast in day two. Thank you for your patience and we look forward to bringing the live broadcasts to you as planned for the remainder of the event. The rest of the schedule is as follows: