Advanced How To – Swimbait Time is Here 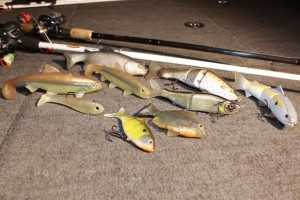 It’s spring throughout most of the country, and with the exception of the deep southern part of our land, the bass are in some stage of the prespawn period.  They are likely either just coming out of their winter haunts and filtering onto their first prespawn transition zones, or they have begun cruising spawning areas looking for a place to set up to spawn.

One of the best things about this time of the year is that the big females are up, and they are getting ready to strap on a serious feed bag in preparation for the arduous task of spawning.  What this means is that the chances of catching a larger than average bass in your lake increases.  In order to capitalize on this opportunity, you just have to appeal to their appetites.

There is no better way to do this than to toss a swimbait.

Swimbaits are much maligned in the country.  Because they originally come from California, and they range in sizes from six to 12-inches, people have varying degrees of confidence in throwing them.  let’s try to put them into perspective. 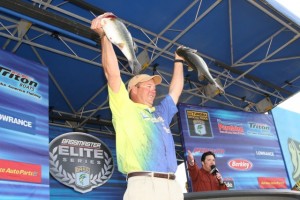 They Work Everywhere
While most people consider them strictly a “West Coast Trophy Hunter” lure, the tournament world is replete with victories from

coast to coast on the lures.  Without going back in the annals of bass fishing history too far, let’s just cite those since the current Elite Series / FLW Tour formats that started in 2006.

April 2007 – Lake Norman, N.C. – Jay Yelas makes a late charge to challenge Larry Nixon for the win using a Hollow Bellied swimbait.  While he did his best to keep the lure quiet, Yelas would win the FLW Tour Angler of the Year title in 2007, and would give much of the credit to throwing his swimbait throughout the year. 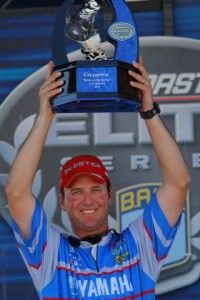 April 2008 – Lake Amistad, Tex. – Todd Faircloth used what he called a “large shad colored swimbait” to produce the largest of his fish throughout the tournament out of what he called his “Magic Tree.”  He would alternate between a six-inch Yamamoto Senko, his swimbait and a large jointed wakebait to win his second Elite Series event.

March 2009 – Lake Amistad, Tex. – Following the lead of Faircloth from the previous year, Jason Williamson won his first Elite Series event by slowly swimming an Osprey Heavy Talon swimbait through trees for females that were suspended in them.

March 2010 – Clear Lake, Calif.  Byron Velvick targeted a grassy flat in the northwest corner of the lake with his signature 7-inch Rago Baits BV3D swimbait.  He slow rolled the bait across the flat, allowing it to come into contact with the grass clumps and then fluttering it down the other side.

April 2010 – Smith Mountain Lake, Va. – Skeet Reese made it two swimbait victories in a row on the Elite Series when he used a different Rago Bait; his signature 6-inch SKT Swimmer to slow roll around windblown rocky points and banks.  The win would be his first of two that year. 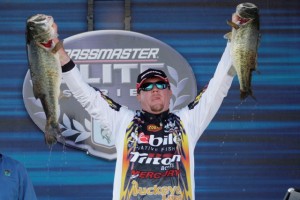 beneath the Wilson Lock and Dam.  Hite’s technique helped him win his eighth Bassmaster win, and second Elite Series victory.

May 2011 – West Point Lake, Ga. – Kennedy would once again use a swimbait – a discontinued 6-inch Bass Pro Shops bait – to claim his second

Elite Series win.  He would use the swimbait to draw larger fish from laydown trees, and if they didn’t strike the swimmer, he would follow up with a Kinami Flash.

Sure, there are a few lakes that would be deemed traditional swimbait lakes, however, as you can see, they produce across the country, and if you look closely at the dates, they all occurred about this time of the year. 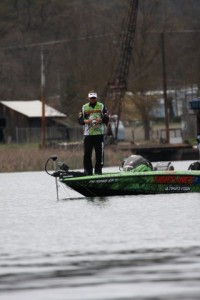 Come in All Shapes, Sizes and Styles
Swimbaits range in size, material and shape, and they also range in application.  for the most part, anglers separate them by deciding what each individual model will be best suited for in terms of application.

There are hard swimbaits that start on the smaller sizes of the range, and can go all the way up to 16 inches.  These baits are usually used in the upper part of the water column, and they are usually constructed in slow sinking to floating models.  These swimbaits are usually retrieves slowly through the water column allowing their hinged bodies to snake or glide through the water, although they sometimes can be twitched on the surface like a dying fish.

Most swimbaits are shaped like a fish, usually an elongated body shape.  Some are made to look like shad, some like bluegill, but for the most part have an elongated body with a tail generating the action of the lure.  From experience, hookup ratios are best on the elongated bodies, deep bodied bluegill type lures can create more lost fish.

While many anglers struggle with the size of a swimbait when they first pick them up, pointing out a similarity to a very popular lure should help relieve some anxiety.   If we select the average size swimbait used throughout the country, we’d be wise to choose the six-inch versions. 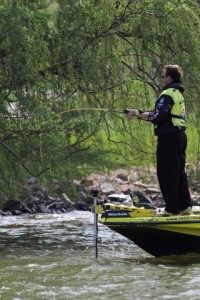 With that in mind, a six-inch version is not much larger than a Heddon Super Spook, and most anglers don’t hesitate to pick one of those up during topwater season.  The truth is, neither do the bass, two-pound bass eat six-inch forage constantly, so throwing an average sized swimbait shouldn’t be an issue either.

Choosing a Bait
There are two things to consider when selecting a swimbait; where the bass are holding, and what the conditions are.  if the bass are suspended in the water column, then a jointed hard bait that in a slow sinking or a floating version or a thru-line soft plastic bait with  treble hooks is best.  If the bass are holding on the bottom, then a heavy, soft bodied swimbait with a top hook, or treble hook rigged on the top will be the best bet.

If they are holding around weedlines, then a hollow bellied bait rigged weedless on a wide gap worm hook is prime.  There are companies that produce weedless versions of larger baits, but test to make sure their hookup ratio is solid before using them in tournaments.

As for selecting a size, the best rule of thumb is to figure out the average size of the bait in your body of water, and select a bait that is larger.  If the forage if four to five inches in length, choose a 6-inch bait.  If the forage is larger, well then… you get the idea.  Of course, if you are fishing a lake with massive bass that are looking for a giant meal in one gulp, then use an 8 to 10-inch bait to appeal to the fish you want to catch. 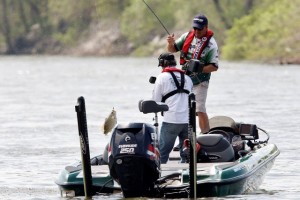 Three Retrieves to Begin With
With most swimbait fishing, slow is best.  When selecting the retrieve to use, it is best to try and match them to the lure you are throwing.

For hard bodied, jointed swimbaits, a steady retrieve mixed with occasional pauses and pops the cause the lure to respond erratically is best.  These lures will erratically dart or even turn around as if to look behind themselves in fear if the angler learns the proper technique for snapping the rod tip with enough slack line.

Soft bait mid-depth crawl.  When fish are suspended around cover, slowly swimming a soft plastic, thru line or swimbait past the obstruction to draw the fish out of hiding. 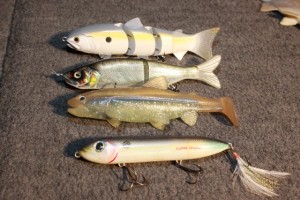 produce giant results.  A great twist to this retrieve is to put the boat in the shallows and cast out into deep water and retrieve the bait uphill.  Bass will often face outwards expecting bait to move into the shallows.  This one can produce some of the biggest bites on swimbaits.

Finally, remember that a swimbait is largely a lure that fish bite when they can see the lure.  The natural appearance of the swimbait is constructed for precisely that reason.  For that reason, they are best when the water is clear to lightly stained, if it is heavily stained, then there are lures that will produce better.