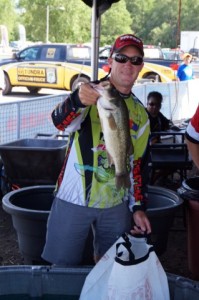 Now that the smoke has cleared on the 2012 season and he has had chance to begin settling with the accomplishments of the year, Advanced Angler recently touched base with Brent Chapman about his Toyota Tundra Bassmaster Angler of the Year title.

Our style here at Advanced Angler is to try to get a little more in depth by allowing the subjects of our stories time to time to digest how everything has come together. That was the plan for our sit down with Chapman. We wanted to hear his thoughts about his career year, why he feels it was such a success and how life has changed since.

Chapman covered several topics, pausing to reflect on how things have evolved in the past few weeks since he closed out the 2012 Toyota Tundra Bassmaster Angler of the Year title.

But, before we get into the conversation, let’s take a look back at the season.

His finishes in the Angler of the Year Points standings have been steadily amongst the top third of the class each season. In 2006; the only year he failed to qualify for the Classic, Chapman finished 41st in the points, in 2007, he finished eighth, 22nd in 2009, 33rd in 2010 and was the last man into the 2012 Classic with a 3th place finish in 2011.

He has seemed to make a routine of standing in the check line, Chapman has cashed a paycheck in 131 of his 202 Bassmaster events throughout his career. But, 2012 proved to be the coming out party for the Lake Quivira, Kan. angler.
Not only did he cash checks in seven of the eight Elite Series events in 2012, but five of them were Elite 12 finishes. In fact, he managed five finishes in the top six throughout the Elite Series season, with the high water mark being his first Elite Series win at Toledo Bend Reservoir on the border of Texas and Louisiana. 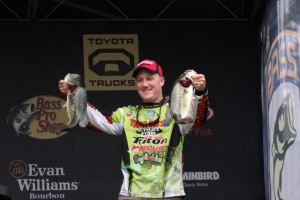 Why the step up to the next level?

Fishing Differently
Chapman puts a lot of the reason for his year on the fact that he felt like he had a lot of reduced pressure from his early qualification into the Classic due to the win at Lewisville. But, he said that isn’t the only reason. “It certainly took a lot of pressure off to already be Classic qualified,” said Chapman. “But, to be honest, it really dates back to the end of the season last year.”

Chapman said that having to wait until the final day of the last event to learn whether he made the 2012 Classic or not really lit a fire under him to prepare differently in the offseason. “If I’m being completely honest with myself, I’d have to say that the focus on getting to a different level started with squeaking in last year,” he said. “I knew I had to work harder if I wanted to get there.”

So, Chapman went on an offseason training plan and worked hard at preparing and strategizing for the following season. “I started the year feeling confident, but winning at Lewisville gave me a whole new level of it,” he said. “I was free to swing for the fences a little more.”

He said he realized that he had gotten too comfortable. “I had gotten complacent and allowed myself to be okay with cashing a check,” he revealed. “Having the freedom to take a few chances made me realize how the top anglers in the sport fish, constantly pushing themselves and never letting themselves get comfortable with where they are; those were the biggest differences this year.” 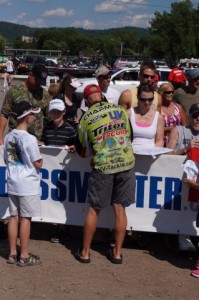 Turning Point
Chapman said that he set a goal many years ago to try and reach the Angler of the Year pedestal, but until midway through the season, his complete focus on the title began with his win at Toledo Bend. “That was really when I thought I had the chance to win it,” he said. “I knew that I had a chance and I told Bobbi (his wife) that I was going to have to put in some extra effort, including pre-practicing for Oneida during the long break between events.”

So, he entered the last event of the year, in the lead by some 13 points, and knowing he had to finish in the Elite 12 to guarantee himself the 2012 Angler of the Year title, he did exactly that. Following a less than stellar practice, he started the first day by putting 16 pounds, 12 ounces on the scales to land in second place. His effort was akin to the proverbial shot across the bow of his competitors, and the Angler of the Year title was all but his.

What About Now?
Chapman said that he really hasn’t had the time to allow the title to sink in fully. “I’ve been asked that question a lot,” he said. “Even as soon as I came off the stage from getting the trophy, people wanted to know how it felt. The truth is, we’ve been so busy since the event with other tournaments and events related to the AOY, that we haven’t really slowed down at all.”

He said that the trophy has been in shipping and at sponsor meetings more than it has been at home. “We had it in Arizona last week at Fulton, and it went on a plane from there to Eagle Claw in Denver for meetings we’re having this week,” he said. “We’ve really been on the run a lot.”

He also said he doesn’t mind. “That’s all part of winning one of these titles,” he said. “There is a responsibility to give everyone their chance with it, to share the experience with the people who have supported us along the way; so we do it gladly.”

While part of the maturation process is realizing that people need the chance to enjoy the title, he is also stopping to experience it himself. “I got a handwritten letter from an angler named Alexis Domain from France who said he was happy for me,” said Chapman. “To have people take time out of their day to send me a handwritten note is a humbling thing. The amount of Facebook comments, texts, calls and emails have all been so overwhelming. My hometown of Lake Quivira has even decided to give me a key to the city, and I’m not quite sure how to take it all in.” 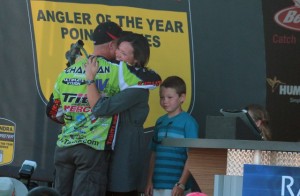 But, when the smoke has all cleared, and all of the meetings and events are over, Chapman said that he will be sitting alone, in a tree stand with bow in hand waiting for the deer of a lifetime to cross his path, and it will probably be at that moment when it will all sink in. “That’s probably when it will all hit me at once,” he said. “When I am quietly sitting there with only my thoughts, and the Lord will allow the moments and memories to come flooding in, and that’s when it will all sink in. Then it will be completely a part of my psyche.

“Then I will begin working on trying to stay at this level and show everyone that I understand the responsibility of what the Angler of the Year title carries with it, and I will want to try and win it again; for us, and for all of the people who made it possible.”