NatGeo Gets BassHookup with Travis Moran 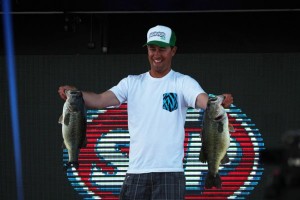 National Geographic Channel set the challenge and now the gauntlet has been thrown. Three fishermen, three different locations across the country, three once in a lifetime fishing adventures rolled into one TV show – King of Fishers: Battle For America. For the trio of angling enthusiasts chosen to participate, it was not only a reality show; but a chance of a lifetime.

After whittling down the field of applicants, one of the three adventurists that was selected for the new NatGeo televised fishing feud was bass fishing’s own Travis Moran known for the vid work of BassHookups.com.

AdvancedAngler.com caught up with Moran a Central California resident just prior to the premiere and found out what the show was about, how he was chosen and how he showed them what the bass boys can do.

AA: Let’s start from the beginning of this adventure, how did you find out about the show?

Moran: I was in Thailand on a trip with my girlfriend and checked in on WesternBass.com, as I do every couple days to keep up with what’s goin’ on back home and I saw an ad for the show asking for a bass fisherman. So, I applied.

AA: What did you have to do to apply?

Moran: It was a quick written application. It asked if you could go anywhere and fish, where would you go and what would you do afterwards. Also to say something that made you unique.

AA: What did you say that got you the gig?

Moran: I told them about livin’ in my motor home, traveling and fishing. I told them about a lake in the hills with record spots and that I would give them a taste of what the bass fishing life would be like – both ends. Living on ramen and doin’ it up, livin’ the lifestyle – as a bass fisherman it can go either way. I said I would show them both sides. As for myself, I told them I would do anything to be better at my sport. As all bass fishermen, I love my sport and want to further it.

AA: How long did it take before you got the nod?

Moran: Three or four weeks later, they scheduled me with a Skype interview. At that time, we had traveled to Vietnam and I had to find a computer to Skype. I started looking an hour 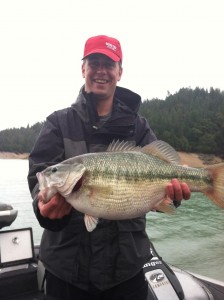 Travis at Lake X with what could have been the world record spotted bass – we will never know.

and a half before the appointment and it took me the full time to find a spot. I paid some guy in an office to use his computer and there were nine million mopeds zooming by in the background the whole time. The lady that interviewed me was in London and I am not sure I heard a thing she was saying. I just kept answering what I thought she was asking and the mopeds kept zooming by, adding a nice element to my uniqueness. She was cracking up. We went back to Thailand and I was told I was a finalist on my last night. I flew back to Sacramento and had three or four days before I left for filming.

AA: Did you know where or what you would be filming or were you goin’ in blind?

Moran: I only knew my leg, the part I had planned which was to take the others to “Lake X” in the motor home, fish for big spots, then go over the hill to Reno, Nev. and live it up in some suites over there. They didn’t tell me anything else.  A couple of days later, I got on the plane to Miami, a limo picked me up, dropped me off at a hotel and I was told they would be back around 11 o’clock. I was sitting in the room waiting and that is when it got weird. I started having doubts. I was thinking that I should have checked things out. I just got on a plane and flew across the country and don’t even know if this thing is legit. The whole story – the fishing trips, the fishing show – all with 100 percent secrecy – it could’ve been the golden egg that lured in the bass fishermen. I started to worry.

AA: So, when the concerns of urban legend black market kidney theft subsided and you got to fishing, how was it?

Moran: Are you kidding, it was awesome. I was in the Florida Keys, they handed me a rod and we went to it. We flew back to California for four or five days to Lake X. It was the middle of winter, there was rainbows, and snow and sun. It was crazy. I packed ’em up in my motor home and we went from ramen to luxury – emulating the bass fishing lifestyle. When we got to Reno, the El Dorado hotel laid out the red carpet for us. I couldn’t have asked for more. Then on to Alaska, where we went on the smallest plane I have ever seen in my life. We got into a beater truck and ended up spinnin’ donuts and screamin our way to the next competition site.

AA: What exactly was the competition?

AA: Okay, so we can assume you got the lock on the win with fishing experience at Lake X, because it is awe – some there; but you if you’ve got to provide the after party that competes with Miami nightlife, that could be tough and what could the Alaska guy do in that situation?

Moran: I know, I thought we would be in an ice hut at night in Alaska; but everybody worked with what we had and provided a unique experience. You will be surprised to see how it all turned out.

AA: Will there be more anglers chosen for the series? 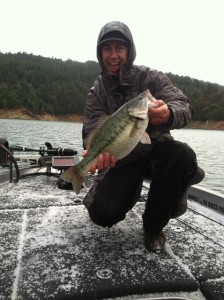 Travis During the Filming of NatGeo King Fisher on Lake X

Moran: There were ten teams of three that did this all over the world. They made ten shows. Mine shows this weekend on the National Geographic U.S. market. It is a test to see if the others will show here. They will all show on the NatGeo global market.

AA: You’re home now, back in the BassHookup biz with both kidneys intact, wrap this up with your thoughts on the whole experience, now that it is over.

Moran: It was the most unique experience someone could ever have. Literally, every single fisherman dreams of fishing the Keys, and Alaska and they lined me up with the best guys there on one trip. Not many people will ever end up on a trip like this. Everything I do is geared to further my skill and my sport, just like BassHookups that I do with my brothers. I want to bring a young energy to the sport and everyday do more to put bass fishing on the map.

AA: One last thing…what’s the story with the giant spotty in the photo that you sent back home from Lake X? Word on the water is that it could be a world record – Did you catch it in the competition?

Moran: (Ugh) In those couple of days that I had between Thailand and leaving for Miami, I went to Lake X to make sure the bite was on. I made three casts and got that one. I didn’t weigh it, because there were no batteries in the scale and I just figured I would catch it again, took a picture and threw it back. At the time I didn’t know the record was 10-lbs. Later, Gary Dobyns called and told me he was sure that I had the world record in my hands. If I caught it once, I know I can do it again and this time I will have the scales and the batteries on the boat – next year!