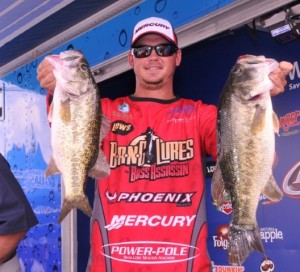 Every year, hundreds of professional anglers ready themselves to face the strenuous upcoming tournament seasons.  Whether anglers fish Bassmaster, FLW or NPPA events, all preparation leads to first tournament launch.  However, specifically with the FLW Tour, the faces of the anglers seem to be a little less weathered as of late.

These are the new breed of “Young Gun” anglers of professional fishing. This new breed of anglers has made an impressive stamp within FLW over the past two years.  The most readily distinguishable being the Forrest Wood Cup Champion in 2012 and having him be only 21 years old.  Rather than taking a “laid back” approach to learning how the more seasoned anglers attack their tournaments, these guys are hitting the water hard and not looking back.

This was apparent as Drew Benton claimed a huge victory on Lake Okeechobee this year.  Benton, whose highest placement in any other FLW Outdoors event until the 2013 FLW Tour Opener was 14th at an EverStart; made an impression on the field.  The 24-year-old boasted an impressive weight of 75 pounds, 7 ounces to claim victory over veteran FLW Tour pro Brent Ehrler.

Another angler to make his mark is first year pro Philip Jarabeck, of Lynchburg, Va. This 23-year-old is also making a run for a top spot.  Even at his young age, Jarabeck has fished more than 35 events in FLW Outdoors competition, but this marks his first year in 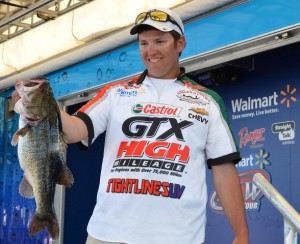 the front of the boat.  Castrol backed Philip during his Co-angler days and continues to support him as he embarks on his pro career.

The pros on tour think highly of him too.  David Dudley, Jarabeck’s fellow Castrol team member, stated during a weigh in that maybe he should be one of Jarabeck‘s co-anglers.  His reasoning?  So that he could pick up some new tricks; pretty strong recommendations coming from a three time FLW Angler of the Year and Forrest Wood Cup Champion.

Up and coming, 23-year-old Adrian Avena, from New Jersey, describes his personal brand as “determined.”  His consistency and humble nature on the tour are nothing to underestimate. Avena says, “I have been very fortunate to have a family that supports me in what I want to do,” he said.  “But I have to make the most of it; I hate to lose.”  Avena makes a detailed game plan prior to each tour event.  He operates on a “dark to dark” practice day strategy that seems to be working well for him thus far, as he has already tallied impressive credentials.  He is entering his second year as an FLW Tour pro, qualified for the 2012 Forrest Wood Cup, and has earned over $100,000 in his short career. 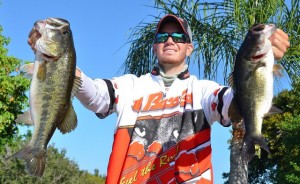 Of course, the angler who still has the fishing world’s jaws agape is 2012 Forrest Wood Cup Champion Jacob Wheeler.  At the young age of 21, Wheeler stole the show at the Forrest Wood Cup last year, taking home the title of champion.  Even more impressive is that it is not his first major title.  He preceded his 2012 Cup win with the 2011 Walmart BFL All American Championship.  Wheeler talked about his path. “Just going through the ranks, fishing BFL’s can get you where you want to go,” he said.  “I’m an example, it happened to me!”  Will he be able to make a strong showing in the 2013 season? “I feel like this year, I’m expected to catch them,” Wheeler explained,  “When I don’t catch them, people are like ‘what happened’?”

But, it hasn’t seemed to affect him thus far.  Being a year older, and a season wiser, it looks like he is well on his way, as Wheeler finished 21st on Lake Okeechobee then followed it up with an 11th place finish at Lewis Smith Lake this past weekend, he is showing the pro field he will do everything he can to build on his championship title. 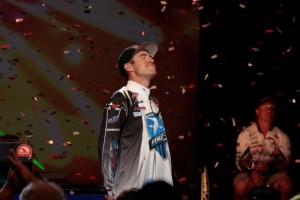 This new crop of young pros have had stellar examples who have led the way.  Two professional anglers who have been at the start of the “young gun” era are Guntersville, Ala. pro Justin Lucas, 26, and Stetson Blaylock, 25, of Benton, Ark.  These two original “young guns” have been integral faces on the FLW Tour for some time now.

“I still feel like one of the new guys,” Blaylock explained when asked about his five years as a pro.  Lucas has been one of the hosts of the FLW College series where he inspires college anglers to follow their fishing ambitions.  Blaylock, who went pro in 2009, has mastered the front of the boat and is now the primary face of up and coming industry manufacturer 13 Fishing.

His keys are simple.  “Be humble, don’t get too high in the high’s and too low in the lows,” Blaylock said.  If given the chance, his advice to young professional anglers would be, “… respect the anglers that have been out there a long time.”

This group of anglers’ passion is palpable when you hear any of them speak about their fishing experiences or see them in action out on the water.  At their youthful ages, they reach far and wide as inspirations to younger anglers throughout the country, giving them the tenacity to hold onto their own dreams and aspirations to fish professionally. 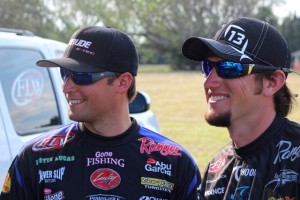 The journey of being a professional fisherman has just started for these anglers, and only time will tell where it will take each one of them.

Could it be that we will we see another “young gun” atop the leaderboard?