I’m happy to announce that I officially declare The Duckett Comeback Tour over. It was Phase 1 of a journey, and it was a success. Time to move on to the next frontier. 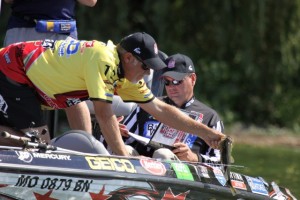 Next year will be Phase 2.

So by declaring that I’m finished with the comeback tour, I’m not saying that I’m where I want to be as a professional angler. I’ve got a few more miles to go on that. I’m just saying that we’re moving into Phase 2 because the goals I set with the Comeback Tour have been accomplished.

I needed the comeback tour because I had my worst year as a competitive angler in 2011. It was a nightmare. I finished 84th in the Elite Series Angler-of-the-Year standings. My goal with the comeback effort was to learn to fish with confidence again. My secondary goal was to get into the top half of the field and start earning checks. My third goal was to make the Bassmaster Classic.

I accomplished all three of those goals, and it happened even after I had a 95th place finish at Toledo Bend. And by the way, Toledo Bend is where I learned more than at any other tournament.
So here are the two big lessons I learned, starting in the past few months of 2011 and continuing through the 2012 Elite Series season.

Lesson 1: You have to make the absolute most of your bad tournaments. You need to fish them with the same positive attitude you fish your good ones.

Lesson 2: A really successful day of competitive fishing is not tied to how much weight you have at the end of the day.

My main reason for writing the Duckett Exchange and, especially, about what it was like to try and come back from the worst year of my life was to share tips and thought processes that might help you (and me) become a better angler. I was thinking about that the other day, though, and I realized that I’m not actually telling you these things to help you learn to catch fish. That’s not what this is about. 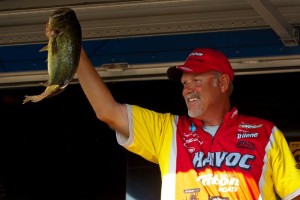 And that’s actually what I was trying to do for myself as I took the steps I did on the comeback trail.

There is one thing I didn’t emphasize much during these Comeback Tour writings. That is the fact that I fished all year without any local help. The reason for that is that that I didn’t feel like I’d get to the bottom of what went wrong during 2011 if I was trying to fish areas that local anglers said might work. I needed to find fish and catch them on my own.
In other words, this past year I learned to fish again.

You might recall that this yearlong journey started with preparation. I cleaned my garage, my truck and my boat – and then I scaled down my “stuff” to just what I need. And then I prepared more thoroughly. I studied. I concentrated. And I made a determined effort to stay on an even keel.

I did those things in order to fish with more confidence. Preparation is Step 1 toward confidence.

Step 2 was actually executing my game plans on the water. I concentrated to make sure I didn’t get frustrated if I believed I was doing the right things. Then, if I determine that I needed to change direction, I just did it – most of the time. That’s a great lesson: Don’t get frustrated when things go wrong, because they often do – just execute your plan and make your adjustments.

I’ve written plenty of times that fishing is a mental process. It’s all about confidence. Every angler in the world will tell you that confidence is the most important component of catching fish.
But here’s something pro anglers won’t tell you, because most of them don’t want to talk about it. If you fish without confidence and with a negative energy, you’re never going to catch fish. You won’t get lucky; you won’t get on a hot streak; nothing good will happen if you’re frustrated and unfocused.

Part of that is just common sense. When you’re frustrated you make mistakes. You rush, as I did in 2011. You make bad decisions far too often, as I also did in 2011. Bad things snowball when you lose your confidence.
But what I’m telling you now, I’ll ask you to believe just because I’ve been at the top and I see this a lot. As strange as this sounds, if you’re fishing with negative energy, the fish sense it.

I was talking to Russ Lane not too long ago about this. Like I said, most anglers don’t want to talk about the “aura” that goes around anglers, but Russ was telling me about his struggles in 2007 and 2008. He said that whenever he drove his boat toward fish, the fish ran from him. He said he had an aura that extended about one and a half casts off his boat. He said he would drive into an area where everybody was smoking them, and he couldn’t pull in a single fish.

Trust me when I say I know how that feels.

The fish sense bad energy. It’s almost like the “Law of Attraction,” if you’re familiar with that. If you think something bad is going to happen – it is. That’s the Law of Attraction.

You can call me crazy if you want, but if you feel negative or frustrated – that goes right out from your hands, through your rod, through your line and into the water. 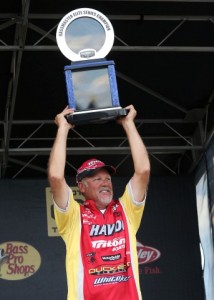 Mark Jeffreys is going to have a field day with that one.

So back to the two primary lessons.

Lesson 1 was: I had to learn to make the absolute most of my bad tournaments. By that I mean that when I was having bad days – the way I did for a few hours at two tournaments in Florida and the whole time at Toledo Bend – I learned that I have to continue to go through my routine, I have to stay the course, I have to make intelligent decisions based on what I know, and I have to fish hard from the first cast until the last.

If you followed my season, you know that I won the last tournament of the year – at Lake Oneida. By winning, I gained a berth in the Bassmaster Classic. I almost made it on points without winning the tournament. But I promise you that if I hadn’t gotten frustrated at Toledo Bend, and if had fished smarter and more focused during that event, I would have finished maybe 60th instead of 95th. And that is a HUGE success. And I would have been in the Classic without having to win the last event.

Lesson 2: I learned that a really successful day of competitive fishing has nothing to do with how many pounds I put in the boat. My successful days were when I fished to the absolute best of my ability. Learn to perform well all day and the pounds will come.

I had to train myself to just appreciate a day of good decisions and positive attitude and not worry about where I finished in the standings. It was a hard lesson to learn, but I think I finally got it.

So that’s what I learned during The Duckett Comeback Tour.

And I hope it helps you.