Ledge Mop Up with David Dudley

Tour pros can be especially good at decimating a school of fish. Give a pro a little while on a school of fish on a ledge; toss in a little current, and the result could be not only a livewell full of heavies, but also dozens of bass culled. 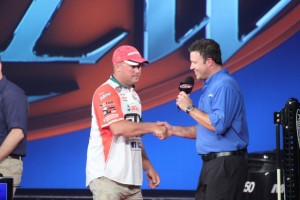 The tales of tour level pros locating a school of fish and catching as many as a hundred or more bass from that one spot are common. The pros will usually pull up to the spot and begin with a crankbait until the school of fish gets “fired up;” meaning they are in competition for food and actively chasing. This often results in bass being caught on each cast.

But, as each bass is caught, lost or culled, the school begins to slow down on its activity level. What do you do then?

“I actually have a series of baits tied up for just this occasion,” Dudley said. “I start with the crankbait, turn to a 10-inch Berkley Power Worm, a flutter spoon and then a Berkley Gripper Football jig. But, I also have a mop up tool with me as well.”

Dropshot?
That’s right, we said drop shot. Dudley said it is the best tool for picking off the last of a school that he has completely busted up. “Let’s say that I’ve been sitting on a school for a while and I was catching them on the power techniques I mentioned earlier,” he said. “While the school is active I catch them on the crankbait, the jig, the big worm and lately, they spoon, but they will slow down.”

Dudley said that initially, after he gets the school ignited, the bass will bite on each cast. but, as the flurry progresses, it will become every other cast, then every fourth cast, and then it will be several minutes between – that is when he picks up the drop shot rig.

“What happens is that a school actually dwindles in numbers the more bass you catch,” he said. “It might have started with 50, but now it’s down to 10 to 20 and the fish need a little more finesse to catch.”

Dropshot Setup
Dudley favors a 7′ medium-heavy Abu Garcia Veritas spinning rod and a Revo Premier spinning reel spooled with Berkley Trilene 100% Fluorocarbon. He said his line size can change depending on the conditions. “I’ll use g to 10-pound-test,” he said. “If the water is clear or there is little obstruction, I’ll go lighter,” he said. “If there is more cover, or the water is dirtier I’ll go heavier.” His weight weighs anywhere from 3/8 to 1/2-ounce depending on the wind. 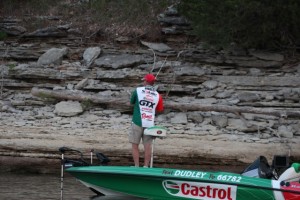 He said he likes the 6-inch Berkley Havoc Bottom Hopper best, and his color choice is simple. “If I’ve got 5000 bass in the last 10 years on plastics, 4895 of them have come on watermelon or green pumpkin,” he said. “They might have a different flake color in them, but the base colors are those two.” He chooses green pumpkin for darker conditions and watermelon for brighter days or clearer water.

Cast and Retrieve
Dudley said that he does not make a cast with a dropshot rig more than 20 yards from the boat because he wants to avoid fighting fish for long periods of time on light line. He also said that he likes to be patient with his retrieve.

“I cast it out and let the sinker hit the bottom,” he said. “When it hits bottom, I lift the worm and leave the sinker on the bottom a couple of times. After that, I drag it forward a little then repeat the process.” He said he might leave the lure in one place for as much as 10 seconds before pulling it towards him.

He cautioned angles to not apply too much action to the rig. “Try to let the subtle falling of the lure and the movement of the current do the work,” he said. “You don’t want to shake the worm too much, it looks unnatural.”

Final Thoughts
Dudley suggested that anglers think of the dropshot rig as a shaky head. “Most of us drag a shag head forward until we come into contact with something before we slow down,” he said. “Pull the dropshot in much the same way and spend the most time fishing where the bass are most likely to be.” 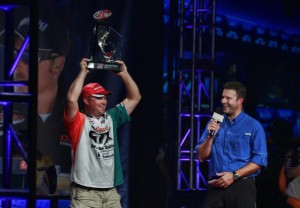 He also strongly recommends anglers trust their equipment. “Companies like Abu Garcia invest a lot of time and money into making great drag systems,” he said. “Let the drag do the work, and the fish will tire out faster. Plus, there’s no way you can back reel faster than a drag can slip, so trust your equipment to do what it was designed to do.”