Las Vegas, Nev. – September 14, 2016 – As tough as the high winds on first two days of competition at the 2016 WON Bass Nitro Boats / Mercury U.S. Open have been on the angler’s and their equipment, this final day may have been the toughest on their spirits. 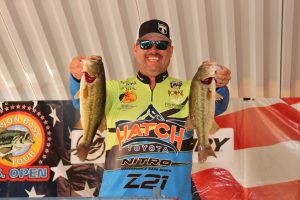 While the first two days featured big winds and even bigger waves, the bluebird skies, slick calm water and mild conditions may very well have been the toughest fishing conditions that the week had presented the field. While navigating big seas creates an issue for boaters, wind – as the old fishing adage states – is your friend when it comes to catching.

Those bluebird days after a front offer the same effect to the fishing as the proverbial banana in the boat; a monkey on an angler’s back.

But, in tournament fishing, somebody always figures something out, and on day three at the U.S. Open, that means a big payday and the keys to a Nitro Z20 powered by a Mercury Optimax Pro XS outboard and getting to hold the coveted U.S. Open Cup overhead.

Johnny Johnson, of Lakeside, Ariz. proved to be the angler who most effectively navigated the rough seas and difficult fishing conditions to earn the title of 2016 WON Bass U.S. Open Champion and claim those prizes.

He did so by bringing an 11-pound limit to the Callville Bay scales to leapfrog the three anglers above him and take his first U.S. Open victory since he started fishing the event in 1994. His day three performance on the toughest fishing day of the event brought his total weight to 27.65 pounds. “I relied on two lures primarily to catch my fish, a 1/2-ounce white Persuader spinnerbait and a 4-inch Roboworm in Oxblood Light and Aaron’s Magic,” he said. “I bucked three foot rollers on points to catch the spinnerbait fish in the wind and slowed down to catch them when it slicked off.” 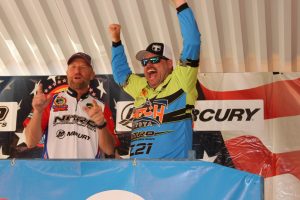 A veteran of 22 U.S. Opens on Lake Mead, Johnson was overwhelmed by the accomplishment. “I absolutely can’t believe that I won this event,” said the host of Fishing with Johnny Johnson television show in Arizona. “This is one of those things I set a goal to accomplish many years ago, and now that it has happened, I am completely thrilled and humbled.”

Day two leader Clayton Meyer of Henderson, Nev. finished with 25.62 pounds to finish in the runner up position for the second consecutive year in the U.S. Open. He proved to be the most consistent angler in the field, and was only beat by the herculean effort by Johnson. “I really did all I could do with the one area of the lake I had,” he said. “I ran to Temple Bar and caught my fish on a jig, but just couldn’t get the one or two big bites I needed to close it out; it’s a little disappointing, but truthfully, to finish second two years in a row is not all bad; I’m happy with it.”

Andy Manahl of Mesa, Ariz. finished third with a three day total of 24.31 pounds. Like Meyer, he ran to Temple Bar all three days. “I maximized what I had, and caught all of my fish on a variety of baits including a creature bait, a Roboworm and few on a Lobina Lures Rico,” he said. “I’m thrilled with how the week went, and even more happy for my friend Johnny [Johnson] for his win.”

On the AAA side Randall Bruce of Las Vegas, Nev. held onto the day two lead that he had established and finished the event with 28.02 pounds to take home the AAA trophy. He was followed in second place by Redding, Calif. angler Teddy Snyder in second place with 26.82 pounds. Gabriel Romero of Henderson, Nev. finished in third position with 25.18 pounds, followed in fourth by Ryan Chambers of Chandler Ariz. with 23.45 pounds and Darin Guglielmo of Santa Barbara, Calif. with 22.69 pounds.

The Costa See What’s Out There Live Coverage brought all of the action from Las Vegas and Lake Mead throughout the three day event. It was broadcast at WonBass.com via live streaming video produced by Z3 Media and BASSZONE.com