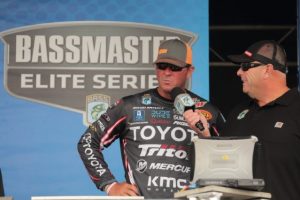 ONAMIA, Minn. — Giant limits of smallmouth bass created quite the spectacle during the first weigh-in of the Toyota Bassmaster Angler of the Year Championship at Mille Lacs Lake in central Minnesota.

Twenty-three anglers crested the 20-pound mark with their individual five-fish daily limits. While that’s very impressive, this tournament isn’t won by the heaviest three-day total. Rather, it’s all about crowning the best angler of the 2016 season.

Gerald Swindle of Warrior, Ala., came to Mille Lacs with a 43-point lead over Keith Combs of Huntington, Texas. Swindle didn’t have to do much coming into this tournament to lock up the AOY title. But during Thursday’s first round, the 15-time Classic qualifier struggled to locate the right fish.

Swindle brought only three bass to the scales that weighed 9 pounds, 9 ounces.

“I just didn’t get many bites today,” Swindle said. “I wish I had a good story to tell, or an explanation to give, but I just couldn’t figure out where the fish were located or what they would be willing to eat.”

Swindle said he had four to five spots where he figured finding five good bass wouldn’t be too difficult. After going through several presentations, and considering the windy conditions, the seasoned veteran just couldn’t settle in.

“It’s not a good feeling coming into the championship with the lead in hand only to fall on your face the first day,” he said. “But all I can do is get back out there tomorrow and figure out where I went wrong. I’m mad at them now, so that’s exactly what I’m going to do.”

Swindle likely has to have a solid Day 2 in order to lock up the AOY title, but mathematically, it’s too close to call at this point.

Seth Feider of Bloomington, Minn., defied long odds and qualified for the AOY Championship after a second-place finish on the Mississippi River last week out of La Crosse, Wis. The 31-year-old pro weighed in five bass today that tipped the scales at 25-8. The mark tied South Carolina pro Jason Williamson for the second-heaviest sack of the day.

“I know today’s weights won’t tell you this, but Mille Lacs isn’t fishing as well as it could right now,” Feider said. “I think the smallmouth are in transition from their summer patterns, and the fish are spread out as a result.”

In order to qualify for the 2017 GEICO Bassmaster Classic presented by GoPro, Feider needs to finish in the Top 3 this week.

“I’m not even thinking about the Classic right now,” he said. “I’m having too much fun to be sweating a tournament six months from now. I’m more concerned about finishing strong and really showcasing this fishery — I truly believe it’s the best smallmouth fishery in the world right now, and these guys are showing it off.”

Feider also said that as the Top 50 Elites are demonstrating the true potential of this legendary Northern fishery, it needs protection.

“Knowing how many 20-year-old smallmouth bass are swimming in this lake, it’s obvious how important conservation is,” he said. “I’d love to see this lake go to 100 percent catch and release on the smallies. This is a very special place, and that quality needs to be preserved.”

The other big story of the day was rookie pro Drew Benton from Panama City, Fla., being officially crowned Bassmaster Rookie of the Year. After a very dominating first season on the Elite Series, Benton was recognized as the best of the freshman class on tour.

“Professional bass fishing is a sport based on momentum, and after a good start on the St. Johns River this year, I felt like I was able to make good decisions and keep the streak alive,” Benton said. “This is a tough sport to make your mark in, and being recognized as the top rookie this year means a lot to me.”

Takahiro Omori, winner of the 2004 Bassmaster Classic, weighed the day’s heaviest five-bass limit at 26-7. Feider and Williamson were next with 25-8, followed by Brent Ehrler of Newport Beach, Calif., with 25-5 and Matt Herren of Ashville, Ala., with 23-14.

Competition will resume on Friday with takeoff beginning at 6:40 a.m. CT at Eddy’s Resort in Onamia, Minn. Weigh-in will take place at Grand Casino Mille Lacs at 3:45 p.m.