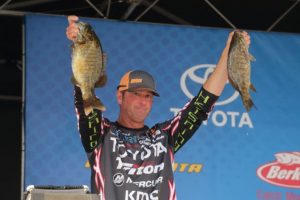 ONAMIA, Minn. — Another impressive day of hefty smallmouth astonished fans during the second round of the $1 million Toyota Bassmaster Angler of the Year Championship at Minnesota’s famed Mille Lacs Lake.

On Thursday, the Top 50 qualifiers from the Bassmaster Elite Series produced 23 limits exceeding the 20-pound mark. Today’s field did one better by bringing 24 limits to the scales exceeding 20 pounds.

While that’s an impressive turnout yet again, the angler who catches the heaviest three-day limit of bass does not win this tournament; rather points are the key to victory this week.

Gerald Swindle of Guntersville, Ala., held onto his Angler of the Year lead after weighing 15 pounds, 13 ounces, which brought his two-day total to 25-6. He improved on Thursday’s performance, but Keith Combs of Huntington, Texas, is within 28 points of Swindle in the AOY race.

Things are heating up.

Swindle again struggled to locate and catch the quality smallmouth many of the other anglers are catching with consistency.

“I’ve tried to not think about Angler of the Year, and I’ve done well at focusing on catching fish until I got to Mille Lacs,” Swindle said. “Now I know what’s on the line, and I need to perform here. It’s frustrating to see how well all the guys are doing, while it takes everything I’ve got to catch a small limit. But that’s fishing, and I’m still mad at the fish.”

Every keeper bass the Alabama angler can catch this week will help push him closer to his second AOY title and the $100,000 first-place prize. The remaining $900,000 will be handed out to the other 49 pros based on where they finished in the points. However, Swindle was hoping it wouldn’t come down to the final day.

“My heart is in the game; my mind is in the game,” said, Swindle, who won his first AOY title in 2004. “But I’m a competitor, and it doesn’t matter if a title is on the line or not, I want to win this derby. Right now, I’m not far from dead last, but I’m keeping my eye on the prize, and if the right fish will bite on Sunday, I think I’ll have a good shot at taking home AOY — a title that I have a tremendous amount of respect for.”

Seth Feider of Bloomington, Minn., took the lead in the weight category from Japanese angler Takahiro Omori with a bag of smallmouth that weighed 24-11 — the day’s heaviest limit.

Feider did exactly what he said he would by catching almost 25 pounds again, and he is confident he can do even better in Sunday’s final round.

“On Sunday it’s supposed to be windy, and I like the wind — it helps the bite,” Feider said. “I’m having a lot of fun, and I’m excited that we’re able to showcase how good Mille Lacs really is.”

When asked if he can repeat his performance again on Sunday, he didn’t hesitate.

“I’ve actually been saving a few of my best spots for Sunday,” he said. “Several of the fish I weighed today came from new spots. But, I’ve narrowed down the pattern, and I’m excited to get back on the water to prove it.”

There will be no fishing on Saturday, as Bassmaster University will take place at Grand Casino Mille Lacs beginning at 11 a.m. Bassmaster fans will have an opportunity to visit sponsor exhibits, attend angler seminars and gather autographs from their favorite pros. The event is free and open to the public.

Competition will resume on Sunday with takeoff beginning at 6:40 a.m. CT from Eddy’s Resort in Onamia, Minn. The final weigh-in will take place at Grand Casino Mille Lacs at 3:45 p.m.