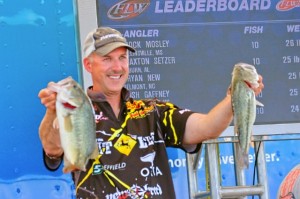 San Antonio, Tex. – Livingston Lures, innovator of the worlds first “smartbait,” is proud to announce the addition of Andy Morgan to their National Pro Angler Team. Morgan is the 2013 FLW Tour Angler of the Year and has had more Top-50 finishes than any other angler in FLW tournament history.

Fred Battah, CEO of Livingston Lures stated, “After meeting Andy Morgan at ICAST 2013, I was impressed with his humbleness and in speaking with him I realized he is a true ambassador to the sport.  While negotiating an official sponsorship with FLW, I was even further impressed to find out that Andy was the 2013 FLW Angler of the Year.  We are excited to support his endeavors and to welcome him to our Livingston Lure National Pro Team.”

“Livingston Lures has made quite a splash in our industry over the past year and I am happy to be the newest member of their Pro Angler Team.  I have a lot of respect for the current team members and I look forward to working with them on future lure designs, testing, and promotion,” expressed Morgan.

Morgan is on the eve of his 16th Forrest Wood Cup appearance, which is also his 11th straight qualification for the championship.

Livingston Lures will have a large presence this week at the Forrest Wood Cup in Shreveport, Louisiana.  The Livingston team will have a booth where they will be selling their innovative “smartbaits,” and demonstrating their Electronic Baitfish Sound (EBS) technology.

About Livingston Lures: Livingston Lures has built a reputation among top freshwater and saltwater anglers for premium quality baits that actually “call” fish to strike.  These hard plastic baits are designed with the highest standards for quality construction, and enticing action. Every Livingston Lures’ bait features Electronic Bait Sound and Vibration Technology (EBS). Livingston Lures prides itself in providing the highest technologically advanced products to the angler at an affordable price.www.LivingstonLures.com