With the exception of winter, when hibernation halts their ribbit, Mike Iaconelli says bass will bite a topwater frog in water temps that range from roughly 55 to 90 degrees, and that action really starts hoppin when surface temps surpass 70. 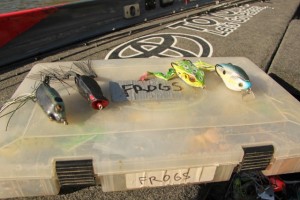 Be warned, however – not all topwater frogs are created equal. Iaconelli highlights four different designs – and tells us when he uses each, describing them from left to right in the attached photo.

Walking Frog for calm water – “This frog is probably the most popular style, it’s extremely buoyant, and it’s great for skipping docks, and fishing around scattered vegetation in really calm water,” Iaconelli says.

Popping Frog for wind and ripples – “Notice the cupped mouth – this is also great for fishing around scattered vegetation, but if there’s a heavy ripple or light chop on the water’s surface, this frog will cause a better disturbance, and get you more bites than the walking frog if there’s any wind at all,” says Iaconelli. “Plus, compared to the walking frog, it tends to stay in one place without moving forward real fast with each twitch of the rod tip, which also helps bass find it better if there’s a chop or ripple on the surface.” 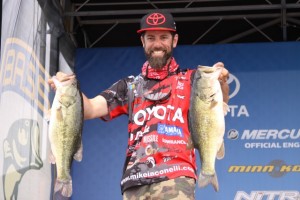 Pushing Frog for ‘cheese’ – “This frog not only has more realistic looking legs, but more importantly, the weight of the legs and the design of the butt tends to push downward on the surface,” Ike explains. “This is the ‘cheese frog’ – cheese is what everybody calls that carpet thick layer of vegetation on the surface that you see at the Potomac River, Lake Guntersville, the California Delta, and places where it looks like you could nearly walk across the water. You gotta have a frog that bass can track from beneath that barrier, and this is it.”

Diving Frog in place of a wake bait – “This is probably the most uncommon frog design because it has a diving bill,” Iaconelli says. “It makes a great alternative to a more common crankbait anytime you have submerged vegetation growing 1 or 2-feet short of the surface to create sort of an open window, or layer of water between the weeds and the surface.”

Iaconelli recommends 50-pound SpiderWire braided line on a fast gear ratio reel to winch bass quickly out of the vegetation, and a 7’ 4” medium-heavy rod with plenty of backbone as a great all-around froggin’ set-up.