Can You Turn Your Professional Fishing Dream into a Reality? 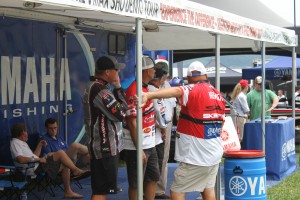 One of the most often asked question of any professional angler is “How do I become a professional angler?” As someone who works in this business covering the sport, I often hear how much people want to make bass fishing their career.

First of all, there is nothing wrong with having that goal. Life without a dream is not worth living. However, many people don’t have an understanding of what it means to take the steps into being a professional angler. Many will go into it thinking that it will be a dream job, and they don’t have a clear picture of what will be required from them, and just how cruel the occupation can be.

Each year, there are a crop of “rookies” that venture out on the pro tours, and each year there are more “freshman” on tour than there are sophomores. In fact, when I look at the rookie year classes on tour, the only year that I would deem as a “successful” rookie class would be 2007. That was the year of Casey Ashley, Jason Williamson, Derek Remitz, Marty Robinson and James Niggemeyer on the Elite Series. On the FLW side, 2007 was the year of Bryan Thrift, Ott DeFoe, Brett Hite and Michael Murphy.

Of course, each of those anglers have experienced different levels of success throughout their careers, but the point is that each of them are still fishing professionally and able to do so as their primary source of income.

For the majority of year classes however, the first year on tour is such a difficult one that most anglers end up not being able to financially continue, or find out just how far behind they are in the fishing skills department, and they wash out.

I recently spoke to Boyd Duckett, the 2007 Bassmaster Classic Champion and the owner of Duckett Fishing, an industry manufacturer of rods reels and sunglasses. Duckett, who is widely regarded as one of the most intelligent and successful 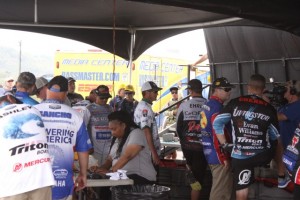 businessmen on tour, has been able to develop himself as a success on the water as well.

Duckett has seen professional success in the music business, the trucking and transportation business as well as the fishing industry, and has a unique feeling about how we as an industry portray the dream to those interested. “In just about every seminar I’ve ever done, I hear from someone who says they are wanting to pursue the career, or that their child wants to become a professional angler,” said Duckett. “I don’t believe that we as an industry have done a good enough job of being real with those people.”

Instead, he feels that we do a good job of describing functions of the job, but not educating the reality of the career. “We do a great job of telling them how to work with sponsors or juggling schedules with fishing time, but we never fully tell them how to be a professional in business,” he said. “I have started trying to let people know just how many pitfalls there are out there, and try to give a blueprint for how a person can build a career without spending their life savings in the process.”

Duckett begins by assuming that someone with that dream is already competing in tournaments, and therefore has the boat, truck and the equipment with which to do the job. “Someone who is looking at those next steps has developed a taste for it, so they won’t have to make the large purchases in order to begin,” he said. “With those types, I begin by telling them how to be competitive.”

To Duckett, being competitive on the water is a process that he has lived, and can therefore describe. “It’s not realistic for an angler to think he can go out of tour and make a living if he is not making money on his home lake,” he said. “It’s much like watching pro sports. Most everyone on that field or court was the best in their area; that is how the Elite Series is. If you’re not cashing checks on your home lake, and winning a few events as well, how can you expect to move to a regional level and beat the best on another lake – which you aren’t familiar with?” 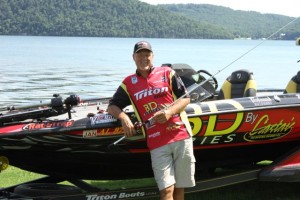 Duckett said an angler needs to build a foundation of results, as well as an account that will fund a growth plan that does not deplete the income needed to live on. “If I enter tournaments on my home lake and begin to cash a few checks, then I establish an account that I can fish out of and grow with,” he said. “By doing that, I’m building a foundation of success, and the monetary means with which to move up a level. But, if I fish 10 tournaments on my home lake, and never cash a check I can begin the process with, then I need to reevaluate my plan.”

While many feel that sponsorship with companies is the means to accelerate the process, Duckett thinks that anglers need to likewise find their way first before asking a company to partner with them in their venture. “The reality of the situation is that as a manufacturer, I don’t need you,” he said. “I’ve got one of the premier pro staffs in the business, and to add another ‘unproven’ person to that overhead does not help our company at all.”

Instead, what he likes to see is an angler who contacts his pro staff manager and says that he knows of an opportunity to help out, and does so. “I find it really impressive when one of my people tells me about a guy who showed up at a regional show and worked the booth without us asking,” he said. “Angler’s like that, who put out the effort and cost themselves to learn and grow is one that we begin to pay attention to. If they sell some goods at a show, open a dealer afterward and then starts to prove their worth on the water as a competitor; that’s the kind of people we build and grow with along the way.”

The annals of bass fishing are full of the wreckage of those who began without a strategy for continued success. The stories on tour of anglers who stopped fishing with tens of thousands of dollars in debt after a couple of years on tour are plentiful. Duckett said it’s time to begin to tell the whole story, and try to help people know precisely what they are getting into before they lose more than they have.

“This can be a really nice career, but it takes work and planning to get there,” he said. “Anglers like Kevin VanDam are a one in a million sort of occurrence. But, a guy can build himself a really nice career if he goes about it the right way and plans, practices and strategizes how to go about it.

“Otherwise, it can be a short career, with very long lasting negative impact; I feel that it’s part of our duty to help anglers see both sides, not just tell them how to be successful.”