A Tale of Two Summertime Fisheries

Summertime fishing can be an absolute bear. Not only can an angler run the risk of injury from sun exposure, but the bass can be extremely tough. The hot weather, hot water and tough conditions can mean long days, and even longer sleepless nights after a day of fruitless fishing.

The 12 anglers who just finished Toyota Trucks All Star Week experienced the highs and lows that summertime angling can produce. A look at the average weights from both tournaments; Lake Jordan and the Alabama River provide an interesting look at how the fisheries produced in the dead of the Alabama summer. 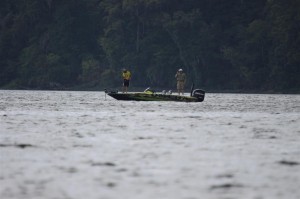 Different Bodies of Water – One Constant
Jake Jordan and the Alabama River are vastly different fisheries. Lake Jordan measures 18 miles from dam to dam, while the Alabama River could be fished in All Star Week competition from Bouldin Dam to Jones Bluff Dam; nearly 80 miles of waterway.

Anglers can catch bass on deep rockpiles and planted brushpiles from deep water on Lake Jordan, while the majority of bass caught during the summer months on the River are extremely shallow.

However, there was one constant variable that had the anglers always on the lookout for; current. Whether it was current being generated form release of water from the Mitchell Lake Dam at the headwaters of Lake Jordan, or from it being pulled from Bouldin Dam; or whether it was being released onto the Alabama River from Bouldin Dam or pulled through Jones Bluff Dam, the current schedules were very important. 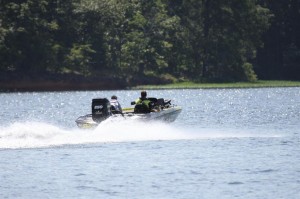 Comparison of Weights
Lake Jordan obviously produced heavier total daily weights because there were twelve anglers fishing, as opposed to a maximum of eight on the Alabama River out of Montgomery. However, the highest overall average daily weight came on day two at the River with an average of 9.76 pounds.

Not surprisingly, based on the fact that he won the entire event; Ott Defoe led all anglers with an average weight of a little over 11 pounds, 4 ounces per day. In fact, his first four competition days during Toyota Trucks All Star Week, Defoe weighed 12 pounds or more. His only day under 12 pounds was yesterday, when he weighed 8 pounds, 7 ounces in eclipsing Evers. 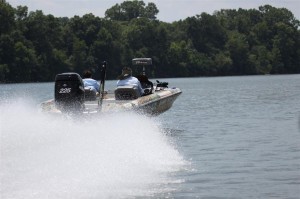 Techniques for the Week
While the average weights for each fishery was nearly identical, the methods used to catch them were as varied as the competitors. A scan through the photo galleries on Bassmaster.com shows anglers fishing the banks, fishing offshore, fishing docks, rockpiles, rip rap and everything in between.

Bubbling Water
Anglers reported finding water in the mid to upper 90’s on both Lake Jordan and on the Alabama River. That hot water has a very distinct effect on bass, but it can vary based on the water temperature. Advanced Angler sought the expertise of an angler with not only on the water observations, but also laboratory experiences with which to share.

Tomorrow’s lead story on Advanced Angler will feature Mark Menendez, from Paducah, Kent. Menendez is a Bassmaster Elite Series pro who has won three Bassmaster events and nearly $900,000 in career earnings, but he also has a degree in Fisheries Biology, and will help anglers learn how they can better locate and catch more bass in the one of the toughest times of the year – Summer.

To hear what some of the All Star Week competitors had to say about their competition on the Alabama River, check out our Raw Video coverage captured by our own Tom Leogrande from Montgomery, Ala. https://advancedangler.com/2011AllStarMain.asp