11/4/2011 – Sometimes you discover things that you may have already known, or at least should have.

Because so many of bass fishing’s biggest events occur in Alabama, I’ve spent much time there over the last several years. I covered the 2008 FLW Tour stop at Lewis Smith Lake near Jasper, I was at the PAA Corporate Cup on Pickwick Lake at McFarland Park in October that same year. 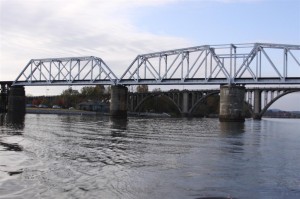 In 2010, the Bassmaster Classic was at Lay Lake, and the Toyota Trucks Angler of the Year Postseason was in Montgomery later that year.

This year I’ve been fortunate enough to attend two separate writer’s events in Alabama. The first one at Lake Guntersville with the Toyota Trucks pro staff, and just this past week in Northern Alabama again at three different lakes; all very different, but exciting fisheries.

It was after the latest three day experience and the event put on by Kay Donaldson and Angie Pierce from the Alabama Mountain Lakes Tourism Association that I realized how unique the fishing in Northern Alabama can be. In three days, on three different bodies of water, I fished with three different guides or pros and caught five different species of fish.

The unique thing about the area is that all three of the fisheries were within an hour drive. Lake Guntersville, Weiss Lake and Neely Henry all provided different opportunities and a variety of results that could have been one of the most surprising fishing experiences I’ve encountered.

I live in Northern California, just outside of Sacramento, and I live within driving distance of some fantastic fishing. My home body of water; offers me a typical reservoir fishery with spotted, smallmouth and largemouth bass. I can drive an hour and a half and fish the tidal water of the California Delta for largemouth and striper. 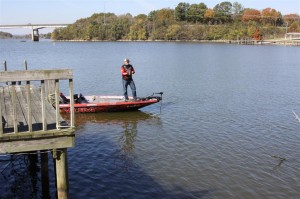 I can drive three hours to Clear Lake and fish for largemouth, and in the fall, good crappie as well. I’ve also got two or three other lakes within three hours of home that provide fantastic fishing; however, they almost require an overnight commitment.

The three days in Alabama provided it all within a 30 to 45 minute drive of where we were staying; at Chattokee Lodge in Gaylesville, Ala.

Guntersville
On November 1; and I mention that date because it was interesting to fish how we did, I spent a day with Elite Series pro Chris Lane fishing frogs and Flippin’. Guntersville had a large amount of emergent grass and algae and we were fishing Lane’s signature Snag Proof Guntersville Frog over the mats.

We got dozens of blowups and caught several fish, including a 7-1/2 to 8-pounder that Lane caught on the Frog. It was a fun, productive day on one of bass fishing’s most famous lakes. 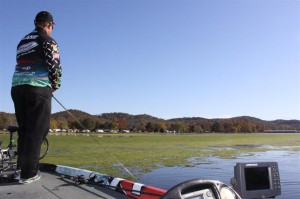 Weiss Lake
Situated near Gaylesville, Weiss is known as the crappie capital of Northern Alabama, and I was able to experience that fishery with noted guide and tournament angler Lee Pitts. Pitts taught us how to shoot docks with mini jigs and produced several nice slabs.

Weiss is less known for its bass fishery, but it has ample populations of quality largemouth and tremendous spotted bass fishery that is underrated. We saw bass action with Pitts for a short time, but spent the morning with Bassmaster pro and Northern Alabama guide Jimmy Mason. We caught bass on crankbaits along rocky walls and around docks on channel swing banks.

Neely Henry
While it is a lake, Neely Henry more resembles a river, and it fishes like one too. Crankbaits, spinnerbaits, jigs and swimming jigs around shallow cover, laydowns, and even around bridge pilings produced largemouth, spotted bass, largemouth and even some white bass while we spent the morning with Pitts on the lake.

Neely Henry was a great place to read current, and use some of the shallow water tools that I rarely get to use when fishing the deep, clear reservoirs of home.

Southern Hospitality
There’s no place for feeling home away from home than in the South, and Alabama always does a great job of making me feel like I am welcome. This trip was no exception, as the folks at Chattokee Lodge, Little R Marina and Resort and The Fish Market in Gadsden all treated our group very well, and the food was excellent. 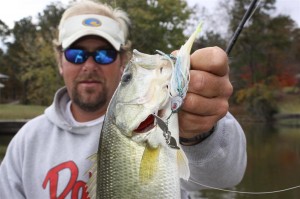 I also really need to give a special thanks to Darlene Temple and Kristie Smith at the Holiday Inn Express in Gadsden. When they heard I was getting off the water at noon to catch my flight out of town that afternoon, they opened up a room at their hotel for me to let me shower and clean up so that I would be fresh and clean for my trip.

This was the same hotel that hosted the PAA Series stop at Neely Henry, they really love anglers, and have built a hotel that includes ample parking for boats and access to external power plugs for charging of batteries overnight.