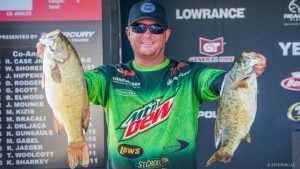 DETROIT, Mich. (June 28, 2018) – FLW Tour pro Chad Grigsby of Maple Grove, Minnesota, crossed the stage with a limit of smallmouth bass weighing 25 pounds, 13 ounces – the largest limit ever weighed in his 15-year FLW Tour career – to lead Day One of the FLW Tour at Lake St. Clair presented by Mercury. The Minnesota pro now holds a 1-pound, 13-ounce lead over pro Darrel Robertson of Jay, Oklahoma, who caught five bass weighing 24 pounds even. The four-day event features a field of 180 of the world’s best bass-fishing professionals and co-anglers competing for top awards of up to $125,000 cash in the pro division and up to $25,000 cash in the co-angler division.

“I thought that I could go out and catch 23 pounds today, but you never really know,” said Grigsby, a four-time Forrest Wood Cup qualifier with one previous Tour-level win. “You can’t win the tournament on Day One, but I’m around a bunch of big fish and now I just have to figure out what they want to bite.”

Grigsby was fairly tight-lipped about his pattern, but said that he fished “deep” on a big main-lake area and caught fish on three different baits. He credited a bait change around 10 a.m. as being the key to his 25-pound limit.

“We were catching them, but we made an adjustment when the wind quit blowing around 10 (a.m.) and then we really started catching them,” Grigsby said. “It was a bait that I had never thrown in practice, but everything that I weighed in came on it.

“The area where I’m fishing is a big area, and it’s deep and has a lot of bait where I’m at,” Grigsby continued. “It seems to have all of the right ingredients. Tomorrow the wind is supposed to be blowing a little bit, so I’m not sure if I’ll be able to catch them the way that I did today. Fishing changes every day, though, and you have to be able to change with it. I know the area where they’re at and I’m confident that I can catch them again.”

The top 10 pros after day one on Lake St. Clair are:

Grigsby’s limit was anchored by a chunky 6-pound, 3-ounce, smallmouth that also earned the day’s $500 Simms Big Bass award in the pro division.

Overall there were 868 bass weighing 3,033 pounds, 7 ounces caught by 178 pros Thursday – by far the largest single-day catch for the FLW Tour pros in 2018. The catch included 165 five-bass limits.

The top 10 co-anglers after day one on Lake St. Clair are:

Rob Bakeman of Rochester Hills, Michigan, earned $250 for the Simms Big Bass award in the co-angler division with a 5-pound, 6-ounce smallmouth.

In FLW Tour competition, pros and co-anglers are randomly paired each day, with pros supplying the boat, controlling boat movement and competing against other pros. Co-anglers fish from the back deck against other co-anglers. The full field of 360 anglers competes in the two-day opening round. Co-angler competition concludes following Friday’s weigh-in, while the top 30 pros based on their two-day accumulated weight advance to Saturday. Only the top 10 pros continue competition Sunday, with the winner determined by the heaviest accumulated weight from the four days of competition.

The total purse for the FLW Tour at Lake St. Clair presented by Mercury is more than $930,000. The tournament is hosted by the Detroit Sports Commission, Macomb County, the Huron-Clinton Metroparks Authority and the Sterling Heights Regional Chamber of Commerce.

Prior to the weigh-ins Saturday and Sunday, June 30-July 1, FLW will host a free Family Fishing Expo at the Lake St. Clair Metropark from noon to 4 p.m. each day. The Expo is a chance for fishing fans to meet their favorite anglers, enjoy interactive games, activities and giveaways provided by FLW sponsors, and learn more about the sport of fishing and other outdoor activities.

Also for youth, the FLW Foundation’s Unified Fishing Derby will be held at the Lake St. Clair Metropark on Saturday, June 30 from 9-11 a.m. The event is hosted by FLW Foundation pro Cody Kelley along with other FLW Tour anglers, and is free and open to anyone under the age of 18 and Special Olympics athletes. Rods and reels are available for use, but youth are encouraged to bring their own if they own one. The 1st and 2nd place anglers that catch the biggest fish will be recognized Saturday on the FLW Tour stage, just prior to the pros weighing in.

Television coverage of the FLW Tour at Lake St. Clair presented by Mercury will premiere in high-definition (HD) on NBC Sports Network (NBCSN) Aug. 8 from Noon-1 p.m. EST. The Emmy-nominated “FLW” television show airs on NBCSN, the Pursuit Channel and the World Fishing Network and is broadcast to more than 564 million households worldwide.