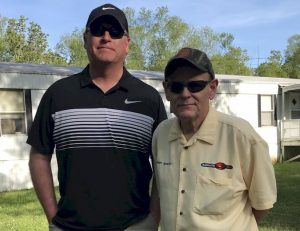 MOORE, OK (June 29, 2018) – The next installment of the “20FT DEEP” online documentary video series debuts on Monday, July 2 at 9:00 AM CST on The BASS ZONE www.basszone.com. “Dancing With the Devil – The Life of Bob” focuses on 1992 Bassmaster Classic champion, Robert Hamilton Jr. and his struggles with success and addiction during the years following his 1992 Bassmaster Classic victory.

The “20FT DEEP” crew traveled to Jackson, Mississippi and spent several days with Hamilton Jr. as he candidly talked about his Classic win and the life challenging events following his victory.

“The ‘Dancing with the Devil – The Life of Bob’ documentary captures the complexity of life after success and failure,” explained Mark Jeffreys, who created and produces the “20FT DEEP” series. “Over the course of a year, we worked on the complex story of how a Bassmaster Classic Champion fell from being at the top of the game, to hitting rock bottom where he pawned the game’s most coveted trophy to pay the bills. This rollercoaster ride from Lake Logan Martin in 1992 to Hamilton’s 2006 exit of the Bassmaster Elite Series is stunning, dark and incredible.

“The willingness of Robert Hamilton Jr. to be open about his drug addiction will hopefully prevent someone from making poor choices that lead to substance abuse” Jeffreys said. “If we can keep one person from becoming addicted to drugs and alcohol through this documentary, it was more than worth the time and effort.”

We treated a number of industry professionals to an advanced viewing of the documentary and this is what they are saying about “Dancing with the Devil – The Life of Bob”:

“A ground breaking documentary in the bass fishing industry. This is an amazing story that gives fans an insight into Hamilton, Jr’s Classic win and his life battling drug addiction.” – Pete Gluszik – Dean of The Bass University
Mark Jeffreys and Robert Hamilton Jr.

“This story highlights just how fast things can change and just how quickly good can be turned into bad. A documentary well done by Mark Jeffreys and the “20FT DEEP” crew.” – Terry Brown – Wired2Fish

”I had never heard the story of Robert Hamilton Jr… Wow. Mark Jeffreys and the crew at The BASS ZONE do a fantastic job of telling his story in the latest “20FT DEEP” documentary. It’s a compelling tale of one man’s rise to glory and then woeful fall from grace due to battles with addiction. I truly hope that this documentary has a “Part Two” that showcases Mr. Hamilton’s return to the sport of bass-fishing to reclaim his past glories.” – Joe Opager, FLW Director of Public Relations

“This documentary on Hamilton’s rise and fall from the top of the game gives you an in-depth look at one of the stories that was not spoken of and not mentioned even in the tightest circles of bass fishing.” – Kent Brown – Ultimate Bass Radio

“An epic interview with the 1992 Classic winner containing all kinds of twists and turns, both good and evil.” – Gary Giudice – President Blue Heron Communications

“The BZ crew has done it again with another one of their signature “20FT DEEP” documentaries. I was actually sitting in the arena when Robert Hamilton won the 1992 Bassmaster Classic in Birmingham, Ala. As an avid fan of the sport, I’ve always wondered what happened to him. “20FT DEEP” producer Mark Jeffreys wanted answers to this mystery. Over the course of a year, Jeffreys went to work, ferreting out this riveting story of how one of the sport’s Bassmaster Classic champions fell from grace, hit rock bottom and even parted ways with sport’s most coveted trophy just to keep his lights on. No matter if you fish or not, “Dancing With The Devil” will leave you stunned.” – Rob Newell – Freelance writer and co-host of FLW Live

“I truly don’t know what to say after watching this “20Ft DEEP” documentary with Robert Hamilton Jr. For a man to scale to the pinnacle of the sport of bass fishing and to find himself at the depths of despair and addiction only a short time later has been one of our sport’s great tragedies and one of its biggest mysteries until today. This effort is a testament to the commitment of Mark Jeffreys, Matt Pangrac and the BASS ZONE crew have to the sport and the members of our entire industry. I commend them for tackling this project, and for Hamilton himself for being transparent in sharing his story, I pray he is able to stand above his demons in victory as he did on that stage in Alabama in 1992; we will all be rooting for him.” – Dan O’Sullivan – Advanced Angler

About Z3 Media LLC
Over the past 24 years, Z3 Media has taken the steps to be the innovative leader in providing digital media platforms and production to promote products and services in a live or on demand environment.
From being the first company to live stream from the water during an Elite Series event seven years ago, to becoming the first company to live stream a weekly in studio show covering the game of professional bass fishing, Z3 Media has established the standard for live engagement for fans, anglers and companies.