In the world of bass fishing professionals, there may be no one more known for being dangerous in the postspawn period than Mount Ida, Ark. pro Mark Davis.  The 47-year-old pro is a three time Toyota Tundra Bassmaster Angler of the Year and the 1995 Bassmaster Classic Champion, a five-time B.A.S.S. winner and an FLW Tour winner. 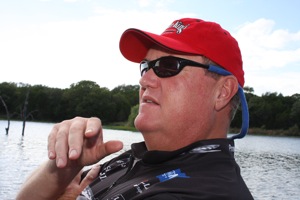 Much of his career success has come in the postspawn period through the spawn; and much of his success has come on the wings of soft plastic lures that measure nearly a foot in length.  No, Davis is not a swimbait aficionado; but, he is a devotee to the effectiveness of big plastic worms.

Soft plastic worms measuring 10 to 12 inches in length are a staple for bass anglers the world over.   But, like any lure; they have a time and place, and an angler needs to know how to apply them in order to maximize their efficiency.

“I love fishing big worms,” Davis said.  “They are a lure that gives me the ability to not only catch quality limit fish, but they will also get really big bites as well.”

To get the most out of his time tossing elongated plastic worms, Davis said he looks for a certain set of conditions, and he has a formula for making the most of his opportunities.

Where to Start
The Arkansas pro said that when the bass finish their spawning cycles and begin to venture out to the main lake for their postspawn migration into their summer haunts; he looks for the conditions to throw the big worm.

“Where I look to throw them really depends on the lake,” said Davis.  “But, mostly I look for big flat points that gently slope from the spawning areas out into the main lake; those are the best postspawn transition areas to throw a big worm.” 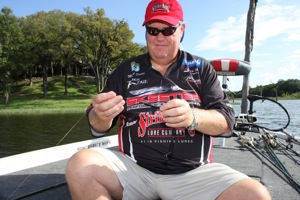 He then searches the point with his electronics by idling around in his Skeeter / Yamaha in search of cover that is on the point.  It may be stumps, rocks, shells or grass, but if he finds something that will hold bass on the point; he starts to cast.

Water Temperature Keys
Davis said that the most important consideration when throwing a big worm is rate of fall.  He said that he adjusts the size of the sinker he is throwing based on the temperature of the water.  “The cooler the water is, the slower I want it to fall,” he said.  “The warmer the water, the more active the bass will be, so I want it to fall faster; so I adjust my sinker size accordingly.”

In water temperatures that are in the low 70’s, Davis starts by setting up his Texas rigged big worms on light sinkers.  His choice in cooler water begins with 1/4-ounce weights and usually ends with 5/16-ounce sizes.  He said it is important to give fish in cooler water a little more time to respond.  However, as the water warms into the upper 70’s to low 80’s, he starts at 3/8-ounce, and often goes as high as 3/4-ounce because the faster fall triggers reflex bites from bass that are more aggressive in the warmer water.

He also said that he favors modern materials in his sinkers.  “I always use Tour Grade Tungsten sinkers on my worms,” he said.  “Tungsten has so many advantages; smaller size and denser and harder for better feel; there’s just no reason not to use it.”

Equipment
Davis uses equipment designed for Carolina rigging to toss his big worms on.  He prefers a rod with a little length, a fast taper and strong backbone for setting the hook on long casts.  His preferred rod is a 7’1” heavy action All Star casting rod that is paired with a 6.4:1 Pflueger Patriarch reel spooled with 20-pound-test Stren 100% Fluorocarbon line. 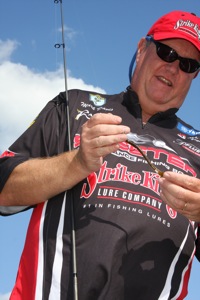 He bases his hook choice on water depth.  For water as deep as 15 feet, Davis uses a 5/0 to 6/0 EWG Superline hook.  However, in deeper water, he turns to a thinner diameter offset shank, round bend model.  “The hooksets in deeper water can be less effective, so I want a hook that penetrates with less force,” he said.  “But in shallow water, when I can get away with it; I use big, heavy wire hooks.”

Worm Types and Colors
There are essentially two kinds of big worms; those with a long, ribbonlike swimming tail, and those with a shorter curl tail, and Davis said he lets two factors make his decision on which to throw.

The first consideration is the type of cover he is around.  ‘If there is thick grass or a lot of deep brush in a lake, then I’ll choose a ribbon tailed worm like the Strike King Rage Tail Anaconda,” he said.  “But if the cover is not so thick, I use the Rage Tail Thumper worm, because it has a little more subtle action.”

He said that the bigger action of the Anaconda is the type that will displace a lot of water and makes it the kind of lure that typically attracts bigger bites.  The Thumper worm will certainly produce large bites, is one that will usually catch more fish.

Davis said he chooses from one of four colors in his big worms, and he starts with looking at the water clarity.  In darker water, he starts with June Bug, for clearer water, he will turn to a green pumpkin worm; but when the bass are really aggressive immediately after the spawn, he prefers plum and red bug worms.  “The brighter colors in that period really seem to trigger an aggressive response,” he said. 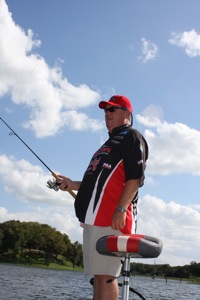 Retrieve
Like any other component, Davis said that the mood of the fish is what dictates the way he retrieves a big worm.  He usually begins with a standard drag technique, but makes adjustments as necessary.  “I usually catch most of my fish by just dragging the lure along the bottom, and shaking it as I come into contact with a piece of structure or cover,” he said.  “If the fish don’t respond to that, then I will start hopping the worm and letting it fall back down on a semi slack line; strikes occur on the fall.”

Example of Success; Almost
The big worm has played a part in many of Davis’ mid season successes, but a recent event showed him how effective they could be.  It was in the final event of the 2010 Elite Series season at Fort Gibson Lake in Wagoner, Okla., and Davis was fishing up the river.  “I had a river fishing mentality, and it wasn’t until the last 30 minutes of the third day that I tied one on,” he said.  “In that time I got a four pound bite, and several other quality fish that culled my weight up; but, I was just a little too late.”

Had he listened to his hunches, and tied on the worm earlier, he would have likely made the Elite 12 cut to fish the final day.  “I finished 15th in that event, and if I had tied it on 15 or 20 minutes earlier, I would have probably made that final cut,” he said.  “I’ve been telling people about big worms for years, and if I’d listened to my own advice; it could have been a great last hour and maybe more.