With the conclusion of competition at the Bassmaster Elite Series Battle on the Bayou and the FLW Tour Major at Lake Chickamauga, the midway point of the 2011 season is here for both tours.  Both of the sport’s major leagues have seen their share of excitement and drama; both have seen their share of expected results and those that are surprising. Both tours are halfway to naming the Angler of the Year and deciding who will fish their championships. There have been touching moments, moments of elation and those of deflation for anglers on both sides of the ledger. 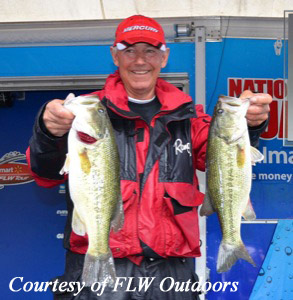 FLW Recap
The 2011 Season started out with déjà vu all over again the first week of March as Bryan Thrift; the reigning FLW Tour Angler of the Year came out of the starting blocks like a world class sprinter in claiming victory during the first FLW Tour Major at Beaver Lake.  With his win, the North Carolinian seemed poised to pick up where he left off in 2010 and keep a firm grasp of the momentum he ended last season with.

The Beaver Lake event proved to be the event of the jerkbait, as most of the field relied on the minnow shaped lures to coax Beaver’s clear water prespawn bass into striking.

The second event of the year at Lake Hartwell brought with it many decisions for the field.  Hartwell’s plentiful bass population was in the middle of all phases of the spawn as the field entered the tournament on March 24.  The anglers would have to choose between sight fishing or fishing for bass coming and going from their bedding areas.

Jason Christie, the Park Hill, Okla. pro relied primarily on a ½-ounce Booyah spinnerbait with a single Colorado blade in a dirty water creek to boat more than 70 pounds of bass and win in wire to wire fashion.  The win proved to be kind of a coming out party for Christie, who had proven to be a force in FLW competition throughout the years, but Lake Hartwell was his first Tour Level Win.

The third event of the year proved to be sweet for Arizona pro Clifford Pirch this past weekend.  In his first season as a privateer following a long stint on one of FLW’s team sponsorship programs, Pirch used a combination of sightfishing and skipping a jig to claim victory at Lake Chickamauga.

The win is Pirch’s second in FLW competition; he won the 2009 FLW Series National Guard Western Division event on Clear Lake in October. 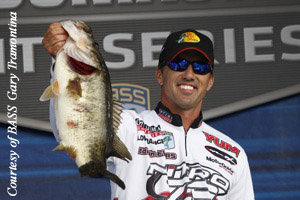 Elite Series Recap
With the first two weeks in the Elite Series season happening in Florida; one thing was for certain, the season had a chance to start off as anything but expected.  While much of the field was figuring out how to deal with the touchy nature of Florida in the springtime; Gainesville, Fla. pro Shaw Grigsby proved that he could still be a major force in claiming his ninth Bassmaster win.

The acknowledged master of sightfishing did exactly that, as he located a backwater pond that housed enough fish to boat 75 pounds of fish to earn the victory.  The backwater area proved to be extremely productive as not only Grigsby, but Grant Goldbeck and Pat Golden also finished in the top six by sharing the area with the champion.

The Series moved an hour to the St. John’s River the following week, and once again; sightfishing proved to be the most productive program for the event.  Edwin Evers of Mannsville, Okla. earned his sixth Bassmaster victory with a last day push that overtook Alton Jones and Terry “Big Show” Scroggins on his home waterway.  Evers boated more than 77 pounds of bass en route to victory.

Two weeks later, the Elite Series turned its attention to Pickwick Lake in Florence, Ala. and the focus would land square on the battle between anglers who chose to target current related bass below the Wilson Dam, and those who chose to pick up a big rod and flip their way through the backwaters.

In the end, Ninety Six, S.C. pro Davy Hite and his current related pattern of fishing Hollow Belly Swimbaits on a jighead in the current proved to be the winning program as the two-time Bassmaster Angler of the Year and 1999 Bassmaster Classic Champion grabbed his eighth Bassmaster Victory with 84 pounds of Pickwick Lake largemouth and smallmouth bass.

The Series then turned to Toledo Bend Reservoir on the border of Texas and Louisiana, and in doing so; the talk of decisions being made between sightfishing and targeting pre or postspawn fish began.  By the time the event ended yesterday; the question had been answered; the answer was both.

Dean Rojas, of Lake Havasu, Ariz. earned his third B.A.S.S. victory by one ounce over Alabama’s Gerald Swindle.  Rojas boated 70 pounds, 15 ounces of bass on a combination of a SPRO Hydro Pop totpwater chugger and a Big Bite Bait Company Warmouth; which he used to catch spawning bass.

In the first three events of the 2011 season, King has posted a runner up finish at Beaver Lake, a fourth place finish at Lake Hartwell and a 34th place at Chickamauga.

No surprise to anyone is to find Virginian David Dudley in third position in the standings.  Dudley is perhaps one of the sport’s steadiest anglers, and his season has thus far produced a ninth, 22nd and 13th place finish.

Spring City, Tenn. pro Wesley Strader is quietly having what could be his best season as a pro.  Strader has posted three top 25 finishes thus far; with his best being an eighth place finish at Beaver Lake; he currently ranks fourth in the standings.

Rounding out the top five in the standings is veteran pro Brett Hite from Phoenix, Ariz.  Hite posted steady 23rd and 25th place finishes in the first two events of the year, then grabbed a fifth place finish this past weekend at Chickamauga.

Those in the hunt that should put some serious pressure on the leaders before the year is over are Andy Morgan in eighth place; reigning Angler of the Year Thrift in ninth place; and Brent Ehrler who currently sits in the 12th position.

Toyota Tundra Bassmaster Angler of the Year  Standings
The 2011 season has brought shakeup to the standing in the Bassmaster Angler of the Year list.  No surprise to industry insiders is the presence of Waco, Tex. pro Alton Jones atop the TTAOY standings.  Jones has built a reputation as being one of the most consistent anglers on tour, and with an eight place finish in the first event of the year at the Harris Chain, a third place at the St. John’s River, a fifth at Pickwick and a 16th at Toledo Bend; Jones has a 56 point lead halfway through the schedule. 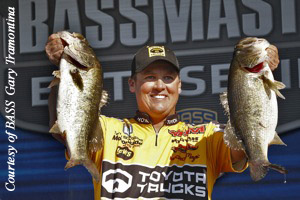 In second place is “Big Show” Terry Scroggins, who also started off with a bang in Florida with a 10th place finish to start, a second place on the St. John’s River, and eighth place at Pickwick, and a 29th place at Toledo Bend.

Kevin VanDam finds himself in the hunt for a 7th TTAOY title in 2011 as he finds himself in third place in the standings.  The Kalamazoo, Mich. pro started the year with a fourth and an 11th place finish in Florida, a 22nd at Pickwick and 33rd at Toledo Bend.

The first big surprise in the standings is Guntersville, Ala. pro Chris Lane.  Coming off of a pair of difficult seasons in 2009 and 2010, Lane has strung together a seventh place finish at the Harris Chain, followed by a 44th at the St. John’s River, a 36th at Pickwick and finally a fouth place finish at Toledo Bend.

The fifth place angler in the standings is Ardmore, Okla. pro Jeff Kriet.  Like Jones; Kriet is an angler that insiders have been expecting to see make a run at the title in the near future; and with a solid start to the year; he has given himself a legitimate shot at the title.

Surprises
Without a doubt, the biggest surprise of the 2011 season is the slow start of Auburn, Calif. pro Skeet Reese  Reese currently ranks 67th in the Toyota Tundra Bassmaster Angler of the Year Standings at the halfway point of the 2011 season.  Following one of the best season in Bassmaster Tour history in 2010 where Reese won two events and posted four other top five finishes along the way; his start has proven to be uncharacteristic for the 2007 Angler of the Year and 2009 Bassmaster Classic Champion.

Reese has posted two mediocre in the money finishes and two completely out of character finishes in the eighties and nineties in the first four events.  However, Reese is a hardnosed competitor who isn’t likely to take the second half of the season lying down.  With B.A.S.S taking 28 anglers to the 2012 Bassmaster Classic from the TTAOY standings, Reese would likely need to rack up nearly 1000 points over the next four events, and proven his history; expect him to make a run at it.

Comebacks
Along with the previously mentioned Chris Lane, Fred Roumbanis of Bixby, Okla. is having a very solid season.  Roumbanis has strung together three steady tournaments to start the 2011 season, and with his fifth place finish at Toledo Bend this past weekend; he appears to be back to “Boom Boom” form.

On the FLW side, the comeback story of the year has to be Mike Reynolds of Modesto, Calif.  Reynolds is a long time pro who made a name for himself in the tours of the West before venturing to the east and the Bassmaster Tour.  He won the 2005 Bassmaster Tour stop on Clarks Hill Reservoir before retreating to the West following the 2006 Bassmaster Elite Series season.

Following three consecutive strong seasons in the FLW Series National Guard Western Division, Reynolds returned to tour level competition in 2011, and currently ranks 11th in the FLW Tour Standings.
There’s no telling what the rest of the 2011 season could mean, but whatever the results are; you can bet they’ll be exciting.